NEW YORK (AP) -- When Steve Trachsel caught A.J. Pierzynski's liner up the middle to lead off the sixth inning, Mike Piazza thought this could be the end of the New York Mets' no-hit jinx. 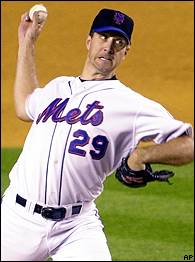 "I really thought he had a shot at it,'' Piazza said. "I
thought this could be the night. But it wasn't meant to be.''

Trachsel took a shutout into the ninth inning before settling
for a 3-2 victory over the Minnesota Twins.

"It never crossed my mind,'' Trachsel said. "Maybe if I got through the seventh inning I would have thought about it.''

Instead, Cristian Guzman hit a soft one-out single in the
seventh to end yet another Mets' no-hit bid.

Piazza hit a solo homer, which landed in Torii Hunter's glove
before going over the fence, and Edgardo Alfonzo added a two-run
shot as the Mets won for the fourth time in five games.

The two homers were all the support Trachsel (5-6) needed. He
struck out seven and walked none, giving up a single in the eighth
to Hunter and three straight singles to load the bases with one out
in the ninth.

"I thought his fastball-split combination was really devastating tonight,'' Mets manager Bobby Valentine said. "He mixed it up in different sequences, but those were his pitches.''

Armando Benitez got two outs for his 17th save, giving up a
two-run double to Corey Koskie before striking out Hunter with
runners at second and third to end it.

It was the third time this season a Mets pitcher has taken a
no-hit bid into the seventh inning only to fall short. Shawn Estes
and Pedro Astacio did it on back-to-back days in April against
Milwaukee.

"Anytime you go into the sixth inning without a hit, you start to think about it,'' Alfonzo said. "You just hope he can finish it up.''

The Mets, who have played 6,421 games, are among only five major
league teams that have never thrown a no-hitter, joined by four
younger teams: San Diego, Colorado, Arizona and Tampa Bay.

The normally deliberate Trachsel was efficient with no
baserunners to deal with in the first six innings. He threw 25 of
29 first-pitch strikes and had only one three-ball count.

"He's a groundball pitcher and his stuff was working,''
Minnesota's Jacque Jones said. "He was getting a lot of them
tonight.''

The 23,217 fans at Shea Stadium sensed history and gave Trachsel a warm ovation as he walked off the mound after the sixth. They booed when Jones tried to bunt his way on leading off the seventh.

Guzman followed with his clean hit and the fans gave Trachsel a
standing ovation, one of the few signs of support he's gotten since
joining the team before last season.

"I didn't want to get caught up in it and make a couple of bad
pitches after that,'' Trachsel said. "But it was a good feeling.''

It is the second time Trachsel has come within eight outs of a
no-hitter, also doing it in a one-game wild-card playoff for the
Chicago Cubs against San Francisco in 1998.

The Mets finally broke through with two outs in the sixth.
Piazza hit a towering drive to left-center against Tony Fiore (5-2).

Hunter, a Gold Glove winner, ran to the wall and measured his
leap perfectly. The ball landed in Hunter's glove, but the glove
fell off Hunter's hand and went over the fence after he crashed
into the wall.

"I caught that ball when I went up. But when I came down my arm
hit the fence. It was like a karate chop,'' Hunter said.

"Tell Mike Piazza to send me a Christmas present because that
was a gift.''

Hunter slumped against the wall with no glove on his hand.
Second-base umpire Dan Iassogna then signaled the homer and Piazza
rounded the bases with his 14th home run. A Shea Stadium security
guard, who was behind the fence, threw the glove back on the field.

Trachsel singled in the eighth and scored on Alfonzo's third
homer.

Twins starter Eric Milton left after four innings with a bruised
left heel. Milton hurt himself running to first base on a groundout
in the third inning but doesn't expect to miss a start.

Game notes
Trachsel pitched a seven-inning no-hitter for Triple-A
Norfolk last season after getting demoted following a 1-6 start to
his Mets career. ... The last time the Twins were no-hit was May
17, 1998, when David Wells threw a perfect game at Yankee Stadium.
... San Diego started play in 1969, Colorado in 1993, and Arizona
and Tampa Bay in 1998. ... Piazza threw out Hunter trying to steal
second in the eighth inning. Piazza has thrown out three runners in
the past four games after catching just two in the Mets' first 67
games.