NEW YORK (AP) -- With Gary Sheffield in the middle of the lineup
this year, the Atlanta Braves might finally be able to put away the
New York Mets before September. 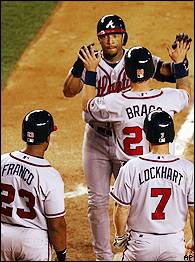 Sheffield's tiebreaking grand slam in the eighth inning lifted
Atlanta to a 6-3 victory over the Mets on Wednesday night. The NL
East-leading Braves won for the seventh time in eight games to open
an 8½-game lead on fourth-place New York.

"That's exactly what we got him for,'' Chipper Jones said. "He
saved his best swing of the series for the most crucial spot.''

Mo Vaughn homered twice for the Mets, including a titanic shot
off Kevin Gryboski more than halfway up the Shea Stadium scoreboard
in right-center field. It was generously estimated at 505 feet, and
considered one of the longest home runs in the history of the
ballpark.

"You have to laugh,'' Sheffield said. "Mo's a strong guy. That
was amazing. His counted for one and mine counted for four.''

The Braves have taken two of three so far in the four-game
series, and six of their last seven against New York. The Mets lost
for the fourth time in 11 games overall.

Sheffield, acquired from Los Angeles last winter for outfielder
Brian Jordan and pitcher Odalis Perez, has struggled at times this
year. But the Braves have already opened some breathing room on the
Mets, who have made stretch runs at rival Atlanta the past few
years only to fall short.

"Brian Jordan did as much damage to us as anyone last year,''
Mets outfielder Jay Payton said. "They traded one for the other.
Gary is picking up right where Brian left off.''

David Weathers (2-3) walked pinch-hitter Keith Lockhart leading
off the eighth. Darren Bragg reached when first baseman Vaughn
bobbled his sacrifice bunt for an error, and both runners moved up
on a sacrifice by Rafael Furcal.

Julio Franco drew a walk from Scott Strickland, and Sheffield
drove the next pitch 410 feet into the left-center bleachers for
his 12th home run of the season and eighth career slam.

"Being a power hitter, when you hit it, you know you've got
it,'' Sheffield said.

"Right now, they've got my number, but I'm going to get their
number,'' he said.

Chris Hammond (6-2) pitched a perfect seventh for the victory,
and John Smoltz got three outs for his 25th save in 28 chances. He
has saved six of Atlanta's seven wins against the Mets this year.

Braves starter Tom Glavine, bothered by a blister on his index
finger, allowed two runs and five hits in six innings, raising his
major league-leading ERA to 1.75. He has not won in three outings
after winning six straight starts.

"He really, truly is an amazing competitor,'' Braves manager
Bobby Cox said. "He's unbelievably tough. He bends a little, but
he never breaks. He's having the best year of his career, really.''

Vaughn hit his sixth home run in the second, his third in seven
career at-bats against Glavine. Payton followed with a 408-foot
shot to center, his fifth of the season and first since May 3 at
Houston.

Braves center fielder Andruw Jones injured his left shoulder
when he jumped at the wall trying to catch Payton's drive. He came
out in a seventh-inning double switch, and Cox wasn't sure if he'd
be able to play Thursday night.

The Braves got a run back in the fifth. Chipper Jones singled
leading off and moved to third on Vinny Castilla's one-out single.
Jesse Garcia beat out an infield hit with two outs, scoring Jones.

Furcal drew a leadoff walk in the sixth, went to third on
Franco's single and scored on Sheffield's double-play grounder to
tie it at 2.

Game notes
Sheffield's last grand slam came with the Dodgers on May
20, 2000, against Florida. ... Mets star Mike Piazza left in the
ninth inning with a bruised right foot. X-rays were negative, and
he is day to day. ... Chipper Jones, who did not start Tuesday
night because of back spasms, was back in the lineup and went
1-for-4. ... Glavine fanned Payton in the sixth for his 2,000th
career strikeout and was given the ball as a souvenir. ... Vaughn
has 29 career multihomer games, the last for Anaheim on May 20,
2000, against Kansas City. He is 4-for-9 lifetime against Glavine
with three homers and a double. ... Mets OF Roger Cedeno was in the
starting lineup after being lifted with a bruised knee Tuesday. ...
The start was delayed 11 minutes because of rain earlier in the
day. ... Franco's bat slipped out of his hands and sailed four rows
into the seats behind Atlanta's dugout in the fourth inning. Nobody
was hurt. ... With the infield overshifted to the right side
against Jeromy Burnitz, 3B Castilla covered second as Payton stole
safely in the fourth inning.