BOSTON (AP) -- Injuries to starting pitchers don't bother the
Atlanta Braves, not with the best bullpen in baseball ready to take
over. 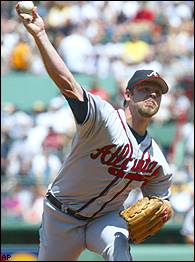 Kevin Millwood left the game with a blister one day after Greg
Maddux's outing was cut short by a sore calf, but the Braves beat
the Boston Red Sox for the second straight game, 2-1 on Saturday
behind Gary Sheffield's two-run homer.

"With our bullpen, it makes it easier to come out of a game,''
Millwood said after striking out a season-high 10 batters in 5 2-3
innings. "You give them a lead late in the game, and it seems like
they don't give it up.''

The Braves, 36-1 when leading after the seventh inning, have a
major league-best 2.97 ERA overall and a 2.34 ERA among their
relievers. On Saturday, relievers Kevin Gryboski, Mike Remlinger,
Darren Holmes and John Smoltz gave up one walk, two hits and no
runs in 3 1-3 innings as Smoltz got his 27th save in 30 chances and
second in two days.

Millwood (5-5) allowed four hits and one walk before leaving
with a blister on the middle finger of his right hand after Nomar
Garciaparra's two-out double in the sixth. Gryboski then gave up
Manny Ramirez's RBI single, but Boston managed just one hit the
rest of the way.

"Maddux was awesome last night. Millwood was virtually
unhittable,'' said Johnny Damon, who is in a 1-for-14 slump and
struck out twice Saturday. Maddux worked five innings in Atlanta's
4-2 win.

The Red Sox, one game behind the New York Yankees in the AL
East, can't blame their lack of offense in their current 1-5 slide
only on opposing pitchers.

"It really doesn't matter who's out there pitching. It doesn't
matter if it's a Cy Young award winner,'' Boston's Lou Merloni
said. "We have to go out and be aggressive.''

Fortunately for the Red Sox, 3-11 against the Braves at Fenway
Park and 0-2 this season, they have just one home game left against
Atlanta on Sunday. Boston is just 18-18 at home overall and 3-8 in
its last 11 games.

"When you're playing the top teams in the league, .500 isn't
bad,'' Brian Daubach said, "but there's no reason for us to be
losing this many at home.''

Sheffield's 13th homer of the season in the third off Derek Lowe
(11-4) was one reason. It helped the Braves set a team record for
wins in June at 20-5. And the bullpen held up after Millwood left.

"Millwood was absolutely terrific,'' Cox said. "I should have
pulled him out about two pitches before I did. I should have went
out there. I tried to let him get the last out (of the sixth), but
it just blistered up and was killing him on every pitch.''

Millwood, who isn't expected to miss a start, struck out four
batters in a row and had at least one strikeout in each of his
innings as the Braves continued to win in their ancestral home.

The Atlanta franchise started in Boston in 1876 and had several
nicknames before becoming the Braves in 1912. They played in
several parks in Boston before moving to Milwaukee for the 1953
season and then to Atlanta in 1966.

Since interleague play began, the Braves are 19-10 against the
Red Sox with one meeting left this season.

Lowe suffered his second consecutive loss despite seven innings
in which he struck out six and allowed two walks and six hits.
After not allowing a homer in his first 12 starts, he gave up his
fourth in his last four to Sheffield.

Atlanta went ahead 2-0 in the third but ran itself out of a
possible big inning. Rafael Furcal doubled but was thrown out
trying to score on Darren Bragg's double. Catcher Jason Varitek
blocked the plate and Furcal ran past him without touching it as
the throw came in from second baseman Merloni. Varitek then tagged
Furcal.

But Sheffield followed with his 13th homer of the season.

The Braves had another runner thrown out at the plate in the
sixth. Matt Franco singled with two outs then tried to score on
Vinny Castilla's single into the left-field corner. But he was
thrown out by Garciaparra by nearly 10 feet.

Game notes
Varitek was thrown out easily at second trying to stretch a
single with no outs and a runner at first in the fifth. ... Furcal
extended his hitting streak to eight games. ... The Red Sox batting
average in 17 interleague games is .221 as they fell to 5-12.
Atlanta is 14-3 against AL teams.