PHOENIX (AP) -- Hideo Nomo said getting a hit off Randy Johnson
was unbelievable. Beating him felt even better. 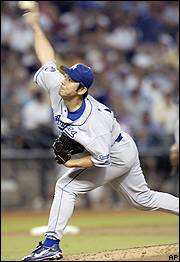 Nomo doubled in the go-ahead run for the second time in as many
outings and threw eight scoreless innings Monday night as the Los
Angeles Dodgers beat the Arizona Diamondbacks 4-0 to extend their
NL West lead to 2 1/2 games.

"I think that's the best game he's pitched so far,'' said the
Dodgers' Eric Gagne, who earned his 30th save in record time. "He
threw a great ball game, and that double was unbelievable. He was a
little righty Ichiro right there.''

Paul Lo Duca, left off the NL All-Star roster by Arizona manager
Bob Brenly, had a double and RBI single.

"I'm not going to lie to you,'' Lo Duca said. "These three
games have a little extra incentive for me, and the rest of the
games against the Diamondbacks will.''

"You've got to put them away with two outs, but I think it was
just a clear case of getting outpitched,'' Johnson said. "You want
to give credit where credit's due. He pitched extremely well. I
think that's the story.''

Nomo struck out seven and walked none in the opener of the
Dodgers' three-game series against the World Series champions.

"Randy Johnson is a great pitcher. Just to be in the same game
is a fun thing to do,'' Nomo said.

Gagne earned his 30th save in 31 chances. He relieved in the
ninth after the first two runners reached against Paul Quantrill,
and was successful in his 20th straight save try.

Gagne's 30th save came in the Dodgers' 82nd game. The previous
mark was 83 games by Bobby Thigpen with the Chicago White Sox in
1990 and Lee Smith with St. Louis in 1993.

Right fielder Brian Jordan preserved the combined shutout by
catching Damian Miller's drive at the wall with runners on second
and third to end the game.

Johnson (12-3), who had won his last three outings, allowed four
runs -- three earned -- on a season-high nine hits. He struck out six
and walked none.

Nomo's two-out double off the left-field wall on a 3-2 pitch
scored Adrian Beltre from first to break a scoreless tie in the
fifth inning.

Nomo scored a moment later on a double by Cesar Izturis.

Nomo has just two hits in 25 at-bats this season, both doubles.

"You never expect the pitcher to get a base hit, especially
against a guy like Randy Johnson, and especially after the swing he
put on the pitch before that,'' Brenly said. "It just goes to
prove anybody with a bat in his hand at this level is dangerous,
even Hideo Nomo.''

When the Dodgers' fifth ended, Johnson flung a water bottle in
disgust in the dugout, then disappeared briefly into the clubhouse
tunnel, where a punching bag hangs for players to take out their
frustrations.

Los Angeles made it 3-0 in the sixth when Lo Duca led off with a
double, then scored on Marquis Grissom's two-out single.

Two Arizona errors with two outs led to an unearned run in the
seventh. Hiram Bocachica reached on third baseman Craig Counsell's
throwing error, then Johnson threw a pickoff attempt into the Los
Angeles dugout, advancing the runner to third. Lo Duca's single up
the middle made it 4-0.

Arizona had runners on third with one out in the second and
fourth innings, and failed to score.

Greg Colbrunn led off the second with a double and advanced to
third on Steve Finley's groundout. But Miller popped out and
Quinton McCracken grounded out to end the inning.

Junior Spivey led off the fourth with a single, extending his
hitting streak to 16 games, and went to second when Luis Gonzalez
grounded out. Colbrunn's infield single put runners at first and
third, but Finley hit into a double play.

Game notes
Arizona played the first of 23 consecutive games against NL
West opponents. ... The Diamondbacks are 48-33 at the halfway mark,
two games worse than their record a year ago. ... Shawn Green and
Mark Grudzielanek were out of the Dodgers' lineup, both because of
collisions with teammates while chasing fly balls. Green jammed his
left thumb when he ran into Dave Roberts on Saturday night;
Grudzielanek had a concussion from his run-in with Jordan on
Sunday. ... Los Angeles leads the season series 4-3. ... Arizona's
Mark Grace broke a toe when he stubbed it on a couch leg in the
visitor's clubhouse in Cleveland Sunday, but said he will wear a
splint and still be able to play.