SAN FRANCISCO (AP) -- Barry Bonds promised his wife that he would finish his latest chase of baseball history on Friday night. 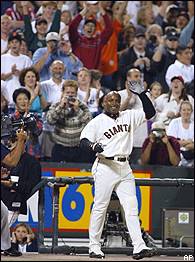 He did it, of course -- and now Hank, Willie and the Babe finally have some company in one of baseball's most exclusive clubs.

Bonds hit his 600th home run high and deep into the center field stands at Pacific Bell Park, becoming only the fourth player to reach the rarified mark during the Pittsburgh Pirates' 4-3 victory over the San Francisco Giants.

With a 421-foot solo shot to center field in the sixth inning against Kip Wells, Bonds joined Hank Aaron, Babe Ruth and Willie Mays with another milestone achievement in his unprecedented two-year power surge.

Everybody knew Bonds' admission to the club was a mere formality, but Liz Bonds stayed up nights this week fretting about her husband's next homer.

From the instant the ball left Bonds' black bat, the sellout
crowd roared in an ovation that rolled through the park for several
minutes. Fireworks flew overhead to celebrate another amazing
achievement by Bonds, who hit 73 homers last season before joining
three of baseball's greatest hitters at 600.

"To be in that select group is great, but nothing's more
satisfying than doing it front of 40,000 friends here in San
Francisco,'' Bonds said. "I don't think that it could ever be more
gratifying than that.''

Bonds hit his first homer since hitting No. 599 on Tuesday
night. Despite No. 600, he couldn't get a victory for the Giants.

When he came to the plate with two runners on and two outs in
the eighth against reliever Brian Boehringer, Bonds grounded out to
second baseman Pokey Reese on the grass in short right field.

"I mean it's sweet, it's nice, I can't sit there and say that it isn't a great moment in my career because, definitely it is,'' Bonds said. "We want to win bad. We're playing good and we just ran against the wall right here.''

Wells (11-9) allowed a historic homer, but he pitched 7 1/3 strong innings and tied his career high with eight strikeouts while winning for just the second time in seven decisions.

"It was a perfect day,'' said Pirates manager Lloyd McClendon, who played with Bonds in Pittsburgh. "A good friend of mine reached a milestone. I'm very happy for him. I can say I was associated with him in some small way.''

"On behalf of Major League Baseball, I congratulate Barry Bonds
on his historic achievement,'' commissioner Bud Selig said in a
statement released Saturday. "Since Babe Ruth hit his 600th home
run 68 years ago, it is remarkable that only three players have
reached that mark. ... It is not surprising that the three who
preceded Bonds are in the Hall of Fame, and he surely will join
them.''

Aramis Ramirez homered and drove in four runs for the Pirates.
Mike Williams pitched the ninth for his 34th save in 36 chances.

Bonds singled in the first and grounded out in the fourth, but he crushed a 2-1 pitch from Wells in the sixth. Bonds took a long moment to admire his blast as Pac Bell erupted and fireworks launched from the arcade atop the right field wall.

"It wasn't a wonderful pitch, but it wasn't a bad pitch,'' Wells said. "He hits pretty much everything well. I had a front-row seat to the whole thing. I wanted to take it all in and watch. Only I can say I'm the guy who gave it up. I'm happy. A win is a win.''

The ball hit near the edge of the bleachers, and the fan who grabbed it, 36-year-old Jay Arsenault of Vacaville, Calif., emerged with a bloody face.

Arsenault, a construction worker who got the tickets from his boss, came away with cuts on his left cheek, arms, legs and hand. He also had a huge grin and some definite plans for his catch.

Bonds stepped lightly on home plate and pointed skyward with both hands. He then waved to his wife and daughter sitting next to the dugout, and he pointed at his cheering father, Bobby Bonds, who had surgery last month to remove a cancerous tumor from his kidney.

Mays, Bonds' godfather, had a prior commitment and was not at the ballpark.

Except for Bonds' homer, however, San Francisco struggled against Wells. Rich Aurilia hit a two-run homer in the first inning for the Giants, who lost their second straight after a four-game winning streak.

Jason Schmidt (7-6), pitching against his former team for the second straight week, allowed five hits and four runs while striking out five. Schmidt mostly stayed in control, but Ramirez -- who ended a three-month slump this week with an 11-for-24 run -- got two big hits against him.

Ramirez's homer was the only hit allowed by Schmidt until the
sixth, when Pittsburgh loaded the bases with two singles and Brian
Giles' third walk. Ramirez then drove home Jason Kendall and Jack Wilson with a single up the middle.

Game notes
Mays and Aaron will join Bonds at Pac Bell on Aug. 23 in a special ceremony. ... Two of the pitching matchups in this three-game series are exactly the same as the matchups at PNC Park
last weekend. Schmidt beat Wells last week; on Saturday, Kirk
Rueter goes against Kris Benson again. ... In the two innings
following Bonds' homer, the Giants announced a series of promotions
and memorabilia sales surrounding it -- including a commemorative
Bonds bobblehead doll featuring a "home run tracker.''