ATLANTA (AP) -- Andruw Jones filled in nicely in Chipper Jones'
cleanup spot, then paid the price for it. 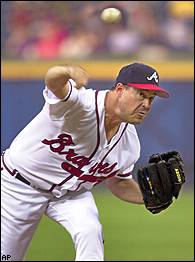 Andruw Jones hit a pair of two-run homers before being beaned,
and Greg Maddux helped the Braves pitch their third consecutive shutout in a 4-0 victory over the Montreal Expos on Saturday night.

''He's comes up to me and says he always looks forward to
Chipper taking a day off,'' teammate Gary Sheffield said. ''He
always says if he's batting fourth, he's going to go deep.''

The Braves lowered their magic number for clinching the National League East
title to two. Montreal has lost nine of 13.

With Chipper Jones scratched because of a stiff neck, Andruw
Jones moved up one spot in the order and responded with his 15th
career multihomer game and third this season.

Jones connected in the first and third innings against Tomo Ohka
(13-7). When Jones came up again in the fifth, Ohka hit him in the
left ear flap of the batting helmet.

''I think he's got really good control,'' Jones said. ''If he's
going to hit me, he can hit me in a better spot than my face. I
think he did it on purpose.

Ohka was immediately ejected by plate umpire Wally Bell as the
benches and bullpens emptied. No punches were thrown as Jones was
held back by Bell and Ohka was escorted off the field by pitching
coach Dick Pole. Montreal manager Frank Robinson was motioning his
players back into the dugout.

Ohka declined to comment on the beaning, but Robinson defended
his pitcher.

''He had hit two home runs on pitches over the plate, so (Ohka)
was trying to make an adjustment and come inside,'' Robinson said.
''We don't do that. This staff doesn't throw at batters. If you
can't get them out with normal stuff, you don't need to be out
there.''

Jones left the game with a bruise around his left ear and cheek,
and manager Bobby Cox said they would see how he was feeling Sunday
before making a decision on his status.

''He's going to be fine,'' Cox said. ''He has the impression of
the ear flap on his face, but I think the flap caught most of the
brunt.''

After Atlanta reliever Tim Spooneybarger pitched a perfect sixth
inning, Chris Hammond came on in the seventh and plunked Montreal
rookie Brad Wilkerson on the hip with his first pitch. Hammond and
Cox were ejected by Bell, but there were no other problems.

''I don't blame him for doing what he did,'' Wilkerson said.
''We knew somebody would get hit. We just didn't know who it would
be.''

Maddux (13-5) labored through five innings, but didn't allow any
runs on seven hits and four walks. It was enough for his 270th
career victory, tying him with Burleigh Grimes for 30th on the
career list.

''I survived more than anything,'' Maddux said.

Darren Holmes came in and retired all three batters he faced,
Mike Remlinger worked a scoreless eighth and John Smoltz pitched
the ninth.

The Expos had their best chances against Maddux, who put runners
on base in all five innings, including the leadoff batter four
times.

Maddux escaped a bases-loaded jam in the second and was saved by
a bizarre play in the fifth.

Jose Vidro led off with a double and appeared set to score on
Andres Galarraga's single to left. But Darren Bragg's throw home
stopped Vidro at third and Galarraga got hung up off of first base.
First baseman Matt Franco's rundown throw hit Galarraga in the
helmet and ricocheted to deep short, where Rafael Furcal picked it
up and sprinted to the bag in time to dive and tag out Galarraga.
Vidro remained at third during the whole sequence.

''That was one funky play,'' Maddux said. ''But when you're
throwing that many scoreless innings, you're going to catch some
breaks like that.''

Game notes
Maddux nearly hit his first homer of the year, but his
second-inning shot down the right-field line curved just foul. He
looked over his shoulder twice as he walked back to the plate, and
then grounded out. ... Maddux has allowed only 43 walks this
season, but 11 of them have come in the last six games. ...
Montreal first baseman Wil Cordero left the game after the second inning with
a lower back strain. The team said he would undergo further
evaluation. ... Vinny Castilla has not hit a home run in 243
at-bats since June 11. ... Braves catcher Javy Lopez sat out his seventh
consecutive game with a sore right shoulder.