ATLANTA (AP) -- Al Leiter wanted to last at least six innings on
the Sept. 11 anniversary. He wound up going all the way. 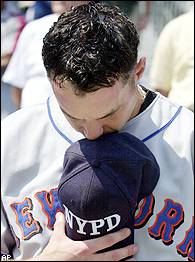 Leiter pitched a six-hitter for his second shutout of the season
as the New York Mets beat the Atlanta Braves 5-0 Wednesday night to
split a doubleheader.

In the dugout before the game, Leiter (13-11) lined up six
different hats that are worn by New York City police officers,
firefighters, port authority workers and emergency personnel.

He wanted to wear them all on the anniversary of the terrorist
attacks, so ''I knew I had to be out there at least six innings.''

Last season, Leiter was on the mound for the Mets in the first
game after baseball's one-week shutdown for Sept. 11. He wanted to
pitch again on the anniversary.

''It was kind of a hard day,'' he said. ''It was a little
depressing. But I tried to use it as a source of inspiration.''

No matter which hat he was wearing, Leiter dominated the Braves.
He struck out eight and limited Atlanta to six singles; only two
runners got as far as second base.

''Outstanding. He was on his game,'' said Mets manager Bobby
Valentine, who donned a hat representing an NYPD canine unit.
''That's the best of Al Leiter there.''

Roger Cedeno drove in three runs to complete a torrid three-game
series at Turner Field. New York's leadoff hitter was 7-of-14 with
a homer and five RBI.

The biggest cheers went to six New York City policemen, flown in
by the Mets for the ceremony. They watched the second game from box
seats near the New York dugout.

As with all night games, play was halted at 9:11 p.m. to play a
video honoring victims of the attacks in New York City, Washington,
D.C., and Pennsylvania.

''It was a long and exhausting 14 hours in uniform with
everything going on,'' Valentine said. ''It was hard to
concentrate. But the interruptions all had meaning to them. The
guys that were here last year, I looked at their faces and could
tell they were feeling it.''

Braves starter Jason Marquis, a native of Staten Island who lost
a childhood friend in the World Trade Center collapse, didn't make
it through the fourth.

''I tried to put those bad thoughts out of my mind for a couple
of hours,'' he said of pitching on the anniversary. ''You could see
the twin towers from where I lived.''

Rey Ordonez drove in New York's first run with the last of three
straight singles. After Leiter bunted the runners to second and
third, Cedeno brought them both home with a single to center.

The Mets finished off Marquis in the fourth with RBI singles by
Ty Wigginton and Cedeno.

''There's no excuses for the way I've pitched,'' he said. ''I
still have a couple of starts left, so maybe I can turn it
around.''

The Braves clinched their 11th straight division title on
Monday. Expected to challenge the Braves in the NL East, the Mets'
magic number for postseason elimination is two.

Jones put Atlanta ahead in the afternoon game with a three-run
homer off Steve Trachsel (9-11), highlighting a five-run third
inning. Jones added a two-run homer against Satoru Komiyama in the
eighth, his 24th of the season.

Jones was a career .348 hitter against the Mets entering
Wednesday's doubleheader, but had not managed an RBI since June 23,
2001. He played 11 games against New York before breaking that
streak.

''I was wondering where the power stroke had gone,'' Jones said.
''But better late than never.''

Millwood (17-6) struggled through 5 2/3 innings, giving up seven
hits, walking three and throwing 107 pitches. But he limited New
York to one run.

John Smoltz got the final out in the ninth inning for his 50th
save in 54 chances, becoming the seventh pitcher to reach 50 saves.
Smoltz has a shot at the major league-record for saves: 57, set by
Bobby Thigpen of the Chicago White Sox in 1990. Randy Myers and
Trevor Hoffman hold the NL record of 53.

''I keep thinking back through all the stuff that I've gone
through,'' said Smoltz, in his first full season as a closer.
''It's just amazing that I could reached this level this quick.''

Mark DeRosa went 4-for-5 and hit a solo home run in the fourth.

After Chipper Jones' third-inning homer, Andruw Jones lined a
ball at Trachsel, who appeared to cover his body with his hands
before being hit.

After a brief consultation with Valentine, Trachsel was replaced
by Jeff D'Amico.

Game notes
The Mets had 16 hits in the second game, but their 11-game
homer streak ended. ... Braves SS Rafael Furcal had two errors in
the nightcap. ... The flag poles outside the stadium, which usually
have flags from the other NL teams, had American flags at
half-staff.