PHILADELPHIA (AP) -- Andruw Jones turned to hitting coach Terry
Pendleton in batting practice, told him he would hit a homer on
each pitch in his next round and proceeded to do it on four of five
swings. 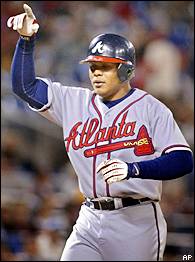 Then he almost did it in the game.

Jones hit three homers, then was left on deck before getting
another chance to bat as the Atlanta Braves beat the Philadelphia Phillies 7-1 Wednesday night.

"I didn't feel that well in batting practice. I just said it,''
Jones said.

It was Jones' first three-homer game in a six-year career. He
has 11 multiple-homer games lifetime, including five this season
and three this month.

Jones didn't get an opportunity to hit a major league
record-tying fourth homer when Chipper Jones grounded out to end
the ninth inning with runners on second and third.

The last Braves player to hit three homers in a game was Jeff
Blauser against Chicago in 1992.

"I didn't think about it,'' Jones said of not getting a chance
to go for his fourth homer.

Jones tied it at 1 in the second inning with his first homer and
made it 3-1 with another solo drive in the fourth. He hit his 35th
homer, a two-run shot in the eighth.

Damian Moss (12-6) allowed one run and five hits in 6 2/3
innings to win for the sixth time in seven decisions.

The NL East champion Braves moved five games ahead of Arizona in
the race for home-field advantage throughout the playoffs.

Philadelphia, seeking its second consecutive winning season for
the first time since 1982-83, fell to .500 with four games
remaining.

"He hit everything tonight,'' Myers said of Jones. "He was
locked in. He hit good pitches and bad pitches.''

The Braves took a 2-1 lead in the third when Matt Franco
grounded into a double play with the bases loaded.

Marcus Giles started the inning with an infield single and went
to second on a fielder's choice when first baseman Dave Hollins
made a bad throw to second on Moss' bunt. Rafael Furcal reached
safely when third baseman Placido Polanco committed a throwing
error on his bunt attempt. Franco's double-play grounder to second
scored Giles.

Polanco gave the Phillies a 1-0 lead in the first with his ninth
homer -- a shot off the facing of the upper deck in left field.

Moss escaped trouble in the third inning by getting Pat Burrell
to ground into a double play with the bases loaded.

"I didn't feel very good the first two innings. I felt weird,''
Moss said. "I made an adjustment, changed my windup and it made a
difference.''

Dan Plesac walked Chipper Jones with one out in the eighth. Jose
Santiago entered, and Jones lined a 1-1 pitch deep to left-center
field.

"He's a great player both ways,'' Phillies manager Larry Bowa
said of Jones, a four-time Gold Glove winner in center field. "He
does everything.''

Game notes
Phillies RF Bobby Abreu went 0-for-3, snapping his hitting
streak at 17 games. ... Chipper Jones has hit safely in 15 of 16.
... The Braves have won 21 of Moss' 29 starts. Moss has allowed two
runs or fewer in 20 of those starts. ... Atlanta LHP Chris Hammond
pitched a scoreless eighth inning. He hasn't allowed an earned run
in 31 games.