NEW YORK (AP) -- John Smoltz and the Atlanta Braves reached some
more highs -- and sent the New York Mets to a nine-year low. 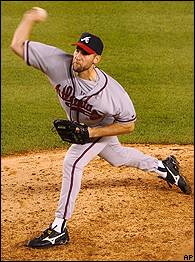 Smoltz set the National League record with his 54th save, finishing a 3-1 victory over the New York Mets on Friday night that started Atlanta to a doubleheader sweep.

Chipper Jones and Darren Bragg hit two-run homers, and Javy
Lopez added a three-run shot that led the Braves to a 7-4 romp in
the second game, a victory that gave Atlanta 100 wins for the fourth time in six years. Bobby Cox became the first manager with five 100-win seasons in the NL.

"It will never come close to Smoltzie and (Greg) Maddux and
what they've accomplished, the years they won 15 and 20 year after
year,'' Cox said. "They're never manager's wins, they're
organization, players -- I'm just along for a nice ride here.''

"I think four teams played better than us,'' Mets manager Bobby Valentine said. "I don't think it's hard to comprehend. It speaks for itself. We didn't play well enough, win enough games, to be anyplace but where we are.''

Al Leiter looked at the Braves, who won their 11th straight
division title, with "jealousy, envy, all of the above.''

"They obviously are doing something right,'' he said.

Minutes after setting the saves record, Smoltz thought back to April 6, when he gave up eight runs to the Mets in the ninth inning of an 11-2 loss.

"I've rallied because of that game. I really believe that,'' Smoltz said. "I'm riding a really good streak.''

Smoltz, who has failed to convert just four save chances this year, struck out three in 1 1/3 innings to move within three of the major league saves record, set by Bobby Thigpen of the Chicago White Sox in 1990. Smoltz had been tied for the NL record with Randy Myers and Trevor Hoffman.

"This is the first game in a while I've had a nervous bug going, which is good with the playoffs coming,'' Smoltz said.

After being converted from a starter to a reliever last year following his return from elbow surgery, he saved games at an unprecedented pace in the first five months. He got his 49th save on Sept. 1 but has pitched just seven times since then, and remembered how teammate Andruw Jones apologized for hitting a two-run homer in a game, eliminating a save chance.

"The last three weeks, opportunities have been scarce,'' Smoltz
said.

He had two "silly goals'' this year: to not blow saves in consecutive appearances (which he accomplished) and to pitch nine straight hitless innings out of the bullpen (which he didn't).

"I made a promise to myself to enjoy this year more than in years past because so much pressure has been on winning the World Series,'' he said. "I may not show it, but I'm very proud and happy with what I accomplished. I'm getting better, believe it or not, I'm getting better at taking things as they come.''

There was none of the drama that usually accompanies a Braves-Mets matchup in September, with about 125 fans in 56,000-seat Shea Stadium at the start. The announced attendance was 33,527, but the threat of heavy rain and the insignificance of the stakes held the actual crowd down to about 5,000.

Atlanta already was assured of home-field advantage throughout
the NL playoffs. Cox hasn't revealed his rotation, but it appears
the first two games of the first-round series against the NL wild
card will be started by Friday's winners: Maddux (16-6) and Kevin
Millwood (18-8). Tom Glavine is likely to pitch Game 3.

Maddux won for the fifth time in six starts and tied Red Ruffing
for 28th on the career list with 273 victories. He allowed one run
and five hits in five innings, throwing 43 of 50 pitches for
strikes.

Pitching with a blister on his index finger that developed during his last throwing session on the side, Maddux lowered his ERA to 2.62, second in the league behind Arizona's Randy Johnson (2.32).

"Wherever you are, be it third or just-missed-the-postseason, you're not in it,'' Leiter said. "I don't know if part of me is part lie, but you're still not a postseason team.''

Game notes
Chipper Jones, with his run-scoring single in the opener
and homer off Pedro Astacio (12-11) in the second game, needs one
RBI to reach 100 for the seventh straight season, one shy of the NL
record shared by Mel Ott and Willie Mays. ... Astacio was 1-7 in
his last nine starts. ... Lopez's homer was his 250th. ...
Former-Met Matt Franco had a single, double and triple in the
second game. ... Vinny Castilla homered in the opener off John
Thomson (9-14), his 11th of the season but just his second since
June 11. ... Mike Piazza struck out twice against Maddux and four
times in all in the opener. ... Millwood, who gave up two runs and
three hits in seven innings, said he had his best curveball this
year. ... Chris Hammond pitched one inning, extending his scoreless
streak to 35 2-3 innings since June 30. ... Marco Scutaro hit his
first career homer with two outs in the ninth of the second game.