It wasn't the way October was supposed to be for the Twins,
particularly the ones who've been dreaming of the playoffs since
their days together in the low minors. There was an emotional
dugout scene -- and the jitters evaporated, replaced by hard-nosed
play and growing confidence.

A.J. Pierzynski had four hits, and Corey Koskie homered and
drove in three runs as the Twins overcame an early deficit and a
series of fielding blunders to beat the Oakland Athletics 7-5
Tuesday in the first game of the AL division series.

It wasn't a happy time when the Twins came back to the dugout
down 5-1 in the second inning of the franchise's first postseason
game since winning the 1991 World Series -- largely thanks to their
own mistakes, including an infield popup that four Twins allowed to
drop untouched.

Starting pitcher Brad Radke slammed his glove into the dugout
bench. Pierzynski, their volatile All-Star catcher, fumed and
shouted. Several players yelled angrily at each other -- until one
of them said something that made sense.

''Torii (Hunter) came in screaming,'' Doug Mientkiewicz said.
''He was saying, 'We've waited our whole lives for this! Let's get
our heads out and get it done! We've still got seven innings!'''

But the Twins, who defied baseball's conventional wisdom about
small-market teams to win the AL Central, steadily rallied back
with offense from nearly every player -- eight Twins got a hit -- and
more of the steady bullpen work that's been one of their strongest
assets.

Eddie Guardado capped four innings of scoreless relief with the
save, getting pinch-hitter Adam Piatt on a fly to right with two
runners on to end it.

The Twins were the best defensive team in the majors this
season, making just 74 errors. They tied the division series record
for errors in a game, yet still came back to win.

''We don't make three errors. We just don't do that,'' manager
Ron Gardenhire said. ''At one point in the game, it was comical.
... The game was getting a little crazy on us. I'd have a hard time
this year finding three innings we played like that. I think it was
just nerves. We got some stuff out of our system today.''

Game 2 in the best-of-five series is Wednesday, with Mark Mulder
pitching for Oakland against Joe Mays.

Eric Chavez drove in two runs for the A's, who tied the Yankees
for the major league lead with 103 victories in the regular season.
But Oakland didn't get the standout pitching that's been its
trademark in three straight playoff campaigns.

''The bottom line is we just didn't pitch today,'' Hudson said.
''They gave us some breaks early in the game, (but) they settled
down. Obviously we would've liked to have won, but there's a lot of
baseball left to be played.''

Mientkiewicz homered for the Twins, who took the lead with a
three-run sixth inning. Koskie put Minnesota up 6-5 with a
bases-loaded groundout against Ted Lilly (0-1), who relieved Hudson
moments earlier. 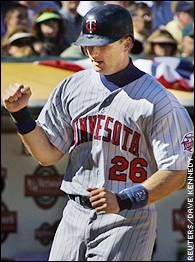 The Coliseum crowd of 34,853 was enthusiastic for its AL West
champions, but thousands of empty seats remained in the upper deck.

Oakland scored three runs in the first inning with a rally that
started when shortstop Cristian Guzman's throw to second base
pulled Luis Rivas off the bag. One batter later, Chavez singled to
right, scoring one run -- and Pierzynski let Michael Cuddyer's throw
get past him into the A's dugout, scoring another run.

The Twins got a run in the second on Cuddyer's RBI double, but
Oakland got two more in the bottom half with a two-out rally
sparked by the Twins' impression of a Little League team.

Ray Durham was on second when Scott Hatteberg popped up to the
infield. Radke, Pierzynski, Mientkiewicz and Koskie all converged --
but nobody even made a grab at the ball as it plopped on the
infield grass halfway up first base and Durham sped home.

''I should have taken charge,'' Radke said.

''I should have taken charge,'' Mientkiewicz said.

Moments later, Koskie made a bad throw to first to keep the
rally alive again, and Chavez got another RBI single to give
Oakland a 5-1 lead.

Koskie hit his two-run homer in the third, and Howe pulled
Hudson shortly after Mientkiewicz's solo homer in the sixth. But
Lilly gave up three straight hits, including Jacque Jones'
game-tying RBI double, and Koskie's bases-loaded groundout drove in
the go-ahead run.

Pierzynski added a run-scoring triple in the seventh against
Cory Lidle.