ATLANTA (AP) -- Barry Bonds stole a glance at the video board as
he trudged off the field, grinning in disbelief as he watched the
replay of Andruw Jones turning a homer into an out.

Another postseason disappointment for the game's greatest
player? Nah.

Bonds didn't have to come up big in Game 1 of the NL division
playoffs. His San Francisco teammates knocked around Atlanta's
heralded pitching staff, Russ Ortiz threw seven strong innings and
the Giants held on for an 8-5 victory over the Braves on Wednesday.

Bonds, who came in with a .196 postseason average, was limited
to a meaningless single in the third. He hit a drive in the eighth
that cleared the center-field wall, but perennial Gold Glover Jones
leaped above the yellow line to make the catch.

Bonds didn't mind. He's more concerned with capturing his first
World Series ring, having never even been on a winning team in his
first five postseason appearances. He lost twice to the Braves in
the early '90s while playing for Pittsburgh.

Bonds can't end that streak alone, of course, and the wild-card
Giants showed they're much more than a one-man team.

San Francisco grabbed a crucial edge in the best-of-5 series
against the East champion Braves, who led the league with 101 wins
in claiming their 11th straight division title.

Game 2 is Thursday night, with Kirk Rueter starting for the
Giants against Kevin Millwood.

''Obviously, Barry gets most of the attention, and he deserves
the attention,'' Ortiz said. ''But we have a really good ballclub
up and down the lineup.''

Down 8-2, Gary Sheffield and Javy Lopez homered in the eighth to
get the Braves close. Atlanta had its chance in the ninth, but Robb
Nen got Sheffield to ground into a game-ending double play with two
runners on for a save.

''It helps when you can get on top early,'' said J.T. Snow, who
got San Francisco off to a quick start with a two-run double in the
second off Tom Glavine.

Bonds, an overwhelming favorite for his fifth MVP award, went
1-for-4 with an intentional walk, a throwing error and another ''no
comment'' for the media.

His teammates did plenty of damage against Glavine, though.

The Giants scored three runs in the second inning and three more
in the fourth, sparked both times by the bottom of the order.

Snow, Benito Santiago and Rich Aurilia each had two RBI.

''Obviously, you look at their lineup and you don't want Barry
to beat you,'' Glavine said. ''I certainly did a good job of that,
but some of the other guys stepped up.'' 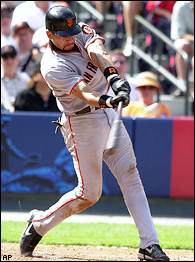 The Braves rallied in the eighth against Tim Worrell. Sheffield,
a close friend of Bonds, hit a solo homer and Lopez added a two-run
shot, getting a second chance after Santiago dropped a soft popup
near the Braves dugout that should have been the third out.

Santiago, an All-Star catcher, redeemed himself somewhat by
leaning into a photographer's box to grab Marcus Giles' popup with
a runner on to end the inning.

Sheffield was the potential tying run in the ninth, but he ended
the game with the double-play grounder to shortstop.

''We don't care who's pitching, we still feel like we can do
it,'' Sheffield said. ''(Nen) made a great pitch when he needed
to.''

Glavine was making his 31st postseason start -- and perhaps his
last in Atlanta. His contract is up at the end of the season, and
the Braves will now have to win at least one game in San Francisco
to reach the NL championship series for the 10th time in the last
12 seasons.

Glavine lasted only five innings, leaving for a pinch-hitter
after surrendering 10 hits. The Giants followed their scouting
reports to a tee, going up the middle or to the opposite field with
most of his outside pitches.

''They seemed to take the approach against me, kind of like the
whole league does, to just hit the ball where it was pitched,''
Glavine said. ''They just hit it where we didn't have anybody.''

San Francisco even scored against Chris Hammond, only the third
reliever since 1900 to post an ERA below 1.00 while pitching at
least 70 innings.

Santiago hit a two-out, two-run double off Hammond in the sixth
to put the game out of reach -- the first runs allowed by the
left-hander since June 30.

''We've been playing some good baseball, regardless of who's
pitching,'' Santiago said.

Ortiz shut down the Braves in just his second postseason
appearance. Atlanta managed one hit off the Giants starter after
Glavine's two-run single in the second, only five hits in all.

Santiago, batting behind Bonds, had three hits. And the guys
behind him contributed five hits and three RBI.

No. 8 hitter David Bell had an RBI single in the second and,
along with Ortiz, sparked the fourth-inning outburst. They hit
back-to-back singles with two outs, and the Giants went on to build
a 6-2 lead.

''With everybody getting a hit, it might help everybody settle
in,'' Bell said. ''Everybody in the lineup is swinging the bat
really well.''

Glavine brought Atlanta within 3-2, singling past third base in
the second. It was the left-hander's first postseason RBI since
the 1996 NL championship series.

Unfortunately for the Braves, Glavine had to return to the
mound. The 10 hits matched the most allowed by him in a postseason
game.

Glavine dropped to 12-14 in the playoffs, missing a chance to
break a deadlock with teammate John Smoltz as the winningest
postseason pitcher in baseball history.

Game notes
Every Giants starter had a hit by the sixth inning. ... The
crowd of 41,903 was about 8,000 short of a sellout. ... Hammond,
who had a 0.95 ERA in the regular season, had to leave the game
with a strained neck after Santiago's two-run double. The pitcher
was apparently hurt making a brilliant play on a slow grounder by
Aurilia; the next four San Francisco hitters reached base. ... The
Giants scored their most runs in a postseason game since an 11-4
victory over Greg Maddux and the Chicago Cubs in the '89 NLCS.
Maddux is scheduled to start Game 3 for the Braves.