ATLANTA (AP) -- Barry Bonds finally got to celebrate in Atlanta.

Ten years ago, Bonds' throw to the plate was too late to get
slow-footed Sid Bream, who slid across the plate with the run that
sent the Braves to the 1992 World Series.

This time, Bonds watched his teammates turn a series-ending
double play. He pointed toward the sky and jogged slowly toward his
carousing teammates, looking a bit bewildered by the whole
experience.

Bonds was a playoff winner at last, homering and scoring the
first two runs as the San Francisco Giants held off the Braves 3-1
in the decisive Game 5 of the NL Division Series Monday night.

''I must admit, I'm a little bit shocked,'' Bonds said. ''I've
never been past the first round. I don't know how to respond.
Should I be happy or just sit here?''

One of the greatest players in baseball history finally seized
the playoff stage, homering three times in the series. He's not
satisfied.

''I'll be happy once I win the World Series,'' Bonds said.

San Francisco won the final two games against Atlanta, though it
got dicey at the end. The Braves, no strangers to postseason
misery, put runners on first and third with no outs in the ninth.

But Robb Nen struck out Gary Sheffield and then got Chipper
Jones to ground into a double play to end it.

Sheffield, a close friends of Bonds, is now rooting for the
Giants to win it all.

''I'm glad he's getting his opportunity. I hate it's at the
expense of me,'' Sheffield said. ''I'm going to call him tonight,
and tell him to go ahead and take it all the way.''

Russ Ortiz earned his second win, sending the wild-card Giants
to a matchup against the St. Louis Cardinals in the NL championship
series. Game 1 is Wednesday night at Busch Stadium.

At 38 and in his 17th major league season, Bonds will be trying
to reach his first World Series -- but he's already exorcised one of
his demons. 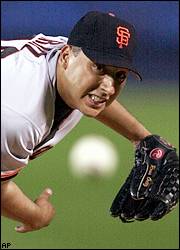 In five previous trips to the postseason, the last two with San
Francisco, his teams were 0-for-5. The four-time NL MVP and
home-run king hit just .196 with one homer and six RBI in those
games.

''I prayed Barry would have a great series, and a great series
he did,'' manager Dusty Baker said. ''He hit the ball a lot harder
than the numbers indicate. I'm very glad for him.''

Two of Bonds' postseason losses were to the Braves, including a
gut-wrenching defeat in Game 7 of the '92 NLCS at old
Atlanta-Fulton County Stadium, now the site of a parking lot just
across the street from Turner Field. The Braves scored three runs
in the ninth, with Bream barely beating Bonds' throw from left
field to score the winning run.

''The Braves have been my nemesis for years,'' Bonds said.

Because of those failures, Bonds became known as a player who
couldn't come through in the biggest games. But in less than a
week, he did his best to purge all those unpleasant memories.

Bonds' first two homers of the series didn't have much impact in
blowout games, but the third gave San Francisco a crucial run in
the tightest matchup of the series.

Appropriately, he finally won a playoff series on the
anniversary of his record-breaking 73rd homer.

In the ninth, Baker and his coaches huddled in the dugout before
Chipper Jones batted, deciding to have first baseman J.T. Snow
guard the line.

The move paid off when Jones grounded over the bag, Snow grabbed
it for one out, then flipped to shortstop Rich Aurilia, who tagged
out Julio Franco to end the series.

Leading off the fourth against Kevin Millwood, Bonds worked the
count full, then sent a fastball soaring into the crisp Georgia
night. Outfielders Andruw Jones and Chipper Jones barely had time
to move before the 417-foot drive settled midway up in the
left-center seats.

''I was just a little bit more aggressive,'' Bonds said. ''They
say they come at me more than anyone else. I'm glad they motivated
me on this one today.''

Bonds also scored San Francisco's first run, starting the second
with a single to left. He moved to second on an infield grounder
and came home when Reggie Sanders singled up the middle with two
outs.

Bonds drew a walk in the eighth, but was thrown out trying to
steal.

The Braves, who scored 25 runs in the first four games, were
held hitless by Ortiz through the first three innings.

From the fourth on, they squandered all sorts of chances,
leaving the bases loaded once and two runners on in three other
innings.

In all, Atlanta stranded 12.

The Braves loaded the bases in the fifth on third baseman David
Bell's throwing error and two walks. Ortiz fell behind 2-0 in the
count to Chipper Jones, but bounced back to get the cleanup hitter
on a grounder for the third out.

Ortiz, the Game 1 winner, was replaced in the sixth after giving
up two hits and throwing his 95th pitch. Aaron Fultz surrendered a
run-scoring single to pinch-hitter Mark DeRosa, then Felix
Rodriguez escaped yet another jam by retiring Matt Franco and
Rafael Furcal.

The Giants quickly reclaimed their two-run lead in the seventh,
loading the bases with no outs to set up Kenny Lofton's sacrifice
fly.

With Atlanta's departure, the three winningest teams during the
regular season -- the Braves, New York Yankees and Oakland Athletics
-- all were sent packing in the first round of the postseason.

Also, for the first time since the current postseason format was
adopted in 1995, all four teams with the best record were
eliminated in the opening round.

For the Braves, this has become the norm. Despite winning 11
straight division titles, they have managed only one World Series
championship. For the second time in three years, they couldn't
even get out of the opening round.

''We're at the point in this clubhouse where it doesn't matter
what you do in the regular season,'' Chipper Jones said.

Now, Atlanta faces an uncertain future. Greg Maddux and Tom
Glavine, the anchors of the pitching staff, are both at the end of
their contracts. With declining attendance, heavy financial losses
and belt-tightening ownership, the Braves could be forced to take a
sizable chunk out of payroll for the first time in their amazing
streak.

The Braves didn't get much help from their key acquisition
during the last offseason. Sheffield was supposed to bolster to
shaky Atlanta offense -- especially in the playoffs -- but didn't do
anything after a Game 1 homer.

Instead, the postseason spotlight finally belonged to Bonds.

Game notes
The Giants struck out 13 times against five Atlanta
pitchers. ... The Braves were in a decisive postseason contest for
the first time since Game 7 of the '96 NLCS.