SAN FRANCISCO (AP) -- Barry Bonds sprinted across the field so
fast, he could've run all the way to the World Series.

Bonds' playoff failures became a thing of the past as soon as
Kenny Lofton hit an RBI single with two outs in the ninth inning,
sending the San Francisco Giants over St. Louis 2-1 Monday night to
win the NL championship series in five games.

Bonds, often criticized for being selfish and not interacting
with his teammates, led the rush from the Giants' third-base dugout
to congratulate Lofton. The four-time MVP -- and five-time playoff
series loser -- was the first player off the bench to reach him.

''It's a feeling I can't explain. Maybe in a few days I'll be
able to tell someone how I feel,'' Bonds said.

Bonds did his part in Game 5, hitting a tying sacrifice fly in
the eighth off a determined Matt Morris. And now, at 38 and in his
17th season, Bonds will get the opportunity to win the one prize
that's always eluded him.

The first all wild-card World Series will start Saturday night
at Anaheim when the Angels take on the Giants.

''I'll know what it's like when I wake up Saturday,'' Bonds
said. ''I don't have dreams. I've never been there before.''

''We've got a tough series ahead of us. The Angels have been
playing great in the clutch. It's going to be down to the wire with
them.''

While his teammates sprayed champagne, Bonds stayed dry -- until
his son poured water over his head.

''When we win the World Series, I'll celebrate,'' he said.

Before this year, Bonds had hit only .196 with one homer and six
RBI in 97 postseason at-bats. But he hit three home runs against
Atlanta in the opening round and kept coming through against the
Cardinals.

''Once I got past the ghosts of my past, I just played
baseball,'' he said.

The Cardinals, playing on emotion since the death of Darryl Kile
in June, once again could not get a big hit when it counted. They
finished 3-for-39 with runners in scoring position in the series.

And the Giants took advantage, breaking through against Morris
to tie it in the eighth. In the ninth, Morris retired the first two
batters before David Bell and Shawon Dunston singled.

At that point, Steve Kline relieved and Lofton pulled the first
pitch into right field. Bell scored easily, sending the Giants to
their first World Series since 1989 as the sellout crowd of 42,673
erupted at Pacific Bell Park.

I think this World Series is going to be a war. Both teams come to the plate and never give an at-bat away. They battle and battle, so the pitchers will really have their work cut out for them. If Jason Schmidt pitches like he did in Game 2 of the NLCS, that gives the Giants an advantage. San Francisco has a power bullpen, but the Angels seem to have the secret weapon in Francisco Rodriguez. He could prove to be an interesting dynamic in the series. Another key is who will DH for the Giants. They don't have a good bench.

Lofton especially enjoyed the party, having been booed at Busch
Stadium last week when his objection to an inside pitch triggered a
bench-clearing skirmish.

''It's an awesome feeling at this point,'' said Lofton, acquired
July 28 from the Chicago White Sox for two minor leaguers. ''I
wanted to get to the playoffs, I wanted to get a ring, and the
opportunity came up.''

Bonds jumped up and down with the NLCS MVP, 37-year-old catcher
Benito Santiago. It was Santiago's home run in Game 4 that gave the
Giants a 3-1 lead in this series.

Bonds got the chance of a lifetime in the eighth, coming up with
the bases loaded, one out and the Giants down 1-0. The home-run
king and first-time batting champion delivered -- sort of -- with a
fly ball that evened it. 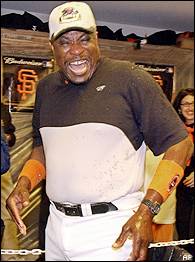 Tim Worrell, the third Giants reliever, wound up with the win.
Cardinals manager Tony La Russa stuck with Morris until the final
batter, letting him pitch in a game that honored his mentor -- Kile.

''I think he was giving me the opportunity to win or lose it,''
Morris said. ''I ended up losing it.''

After sweeping the defending champion Arizona Diamondbacks in
the first round, St. Louis stopped hitting. All-Star third baseman
Scott Rolen did not play in the series after injuring his left
shoulder against Arizona.

''It was a storybook season,'' Kline said. ''It just didn't have
the right ending.''

Morris had a direct impact on the Cardinals breaking a scoreless
tie in the seventh.

Blanked for six innings by Kirk Rueter, St. Louis got going
against reliever Felix Rodriguez when Mike Matheny opened with a
double off Lofton's glove in center.

Morris followed with a nice bunt to the left side and Rodriguez
made a poor decision, trying to get Matheny at third when there was
no play. The Cardinals, unable to get big hits throughout the
series, managed to get a run on Fernando Vina's sacrifice fly.

Morris, hit hard in losing the opener, kept the Giants virtually
silent as he zipped through the first nine batters. He held San
Francisco hitless until two outs in the fifth, when a double by
Bell wound up bringing a howl from Giants manager Dusty Baker and
the crowd.

Santiago drew a leadoff walk and was still at first base with
two outs when Bell blooped an opposite-field double to right. With
third-base coach Sonny Jackson putting up a two-handed stop sign,
Santiago bumped into third baseman Miguel Cairo as he rounded the
bag and retreated.

The fans wanted an obstruction call to send Santiago home, and
so did Baker as he sprung out of the dugout to discuss it with
third-base umpire Jeff Nelson. But Nelson's call was absolutely
correct, according to Rule 7.06.

The rule states that it's the umpire's judgment on whether a
runner would have advanced without the interference. Since right
fielder Eduardo Perez was already making an accurate relay throw as
Santiago was reaching third base, it was clear he would not have
scored.

''I was yelling 'obstruction,' too,'' said umpire supervisor
Steve Palermo, who was in the press box. ''It can't get better than
this. Jeff Nelson shined tonight. Not only with his call and
judgment, but with the application of the rule.

''If he was 100 percent sure that the runner would score, then
he would award him home plate,'' Palermo said.

Morris made sure no one scored when he got Rueter on a
comebacker, and he left the mound while the crowd booed.

Game notes
Morris raised the ire of fans when he hit Lofton in the
back with his pitch in the fourth. Plate umpire Tim Welke
immediately stepped in front of Lofton, who took his time getting
down to first base. ... Perez started while Tino Martinez, stuck in
a 2-for-25 postseason slump, was benched. ... There have been three
previous all-California World Series: Giants-Athletics in 1989,
Dodgers-A's in 1988 and Dodgers-A's in 1974.