BALTIMORE (AP) -- As the fly ball disappeared in the falling
snow, Baltimore Orioles second baseman Jerry Hairston had just one
thought as he ran toward right field. 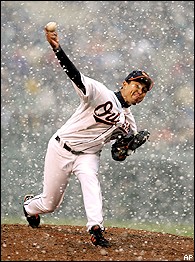 It was a strange Opening Day at Camden Yards, even before the
fly ball hit by Ellis Burks vanished from view Monday. But all
turned out well for the Orioles on a frigid afternoon better suited
for snowballs than fastballs.

Gary Matthews Jr. singled home the winning run with two outs in
the 13th inning, giving Baltimore a 6-5 victory over the Cleveland
Indians.

Opening Day in Baltimore is usually a festive occasion held in a
packed stadium. Although the crowd was announced at 46,257 -- a
sellout -- there were thousands of empty seats in the upper deck.

By the end of the game, only a few thousand fans remained.

Prior to the first pitch, a video tribute and a moment of
silence were held for former Orioles pitcher Dave McNally, who died
over the winter, and pitching prospect Steve Bechler, who died of
heatstroke at spring training in February.

Cleveland scored three runs in the third inning with the aid of
a routine fly ball that got lost between the huge snowflakes that
swirled around the stadium.

"I couldn't even see the hitter, that's how bad it was,''
Orioles right fielder Jay Gibbons said. "I heard him hit it, and
that was about it. I saw the umpire looking at me; I think he was
waiting for me to make a move. That was crazy.''

After Gibbons threw the ball back into the infield, the umpires
halted play -- not soon enough for Orioles manager Mike Hargrove,
who argued in vain that the stoppage should have come before the
ball vanished in the falling snow.

Burks, who was credited with an RBI single, had no idea where
the ball went.

"What ball?'' he said with a chuckle. "I couldn't even see it
at the plate. I told the umpire I couldn't see it. I asked him if
he could see it and he said, 'A little.'''

Said Gibbons: "That's probably the first time I ever thought,
'Don't hit it to me.' I mean, I had no chance. I think it might
have gone in the stands and come out. Nobody knows. It was a really
strange play.''

After a 13-minute delay in which the snow gave way to sunny
skies, Karim Garcia hit a sacrifice fly to make it 3-1.

Hours later, with the bases loaded in the 13th, Matthews hit a
liner off loser Jake Westbrook that soared over the head of Milton
Bradley, who appeared to misjudge the ball.

Winner B.J. Ryan worked the 13th for the Orioles, who trailed
4-1 in the sixth before coming back.

Garcia, a former Oriole, added a solo homer in the sixth for the
rebuilt Indians, who have a new manager, 35-year-old Eric Wedge,
and only eight players remaining from the team that started the
2002 season.

C.C. Sabathia gave up two runs and eight hits in seven innings
in his first Opening-Day start for Cleveland. He left with a 4-2
lead, but Marty Cordova tied it with a two-run homer in the eighth
off reliever David Riske.

Both teams scored one run in the 12th. Omar Vizquel hit an RBI
single for the Indians, and Baltimore tied it when Matthews hit a
leadoff single and scored on a passed ball by Josh Bard.

The game got off to a routine start before the snow started in
the second inning. The flurries turned into huge flakes in the
third, leading to that rare baseball moment in which an outfielder
loses a ball in the snow.

Game notes
Former Orioles slugger Eddie Murray, now a hitting coach
with Cleveland, threw out the ceremonial first pitch. Murray will
be inducted into the Hall of Fame this summer. ... Travis Hafner
had three hits for the Indians. ... B.J. Surhoff, returning to
Baltimore after a two-year absence, received the loudest applause
during pregame introductions. He went 0-for-5.