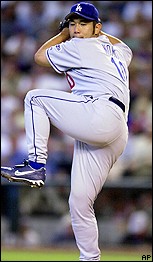 The Dodgers could not have hoped for a better opener.

Nomo pitched a four-hitter and Jordan went 2-for-3 with a home
run and three RBI as the Dodgers handed Johnson his first
Opening-Day loss, beating the Arizona Diamondbacks 8-0 Monday.

"You couldn't have scripted a better Opening Day for us,'' said
the Dodgers' Paul Lo Duca, who had a two-run single against Johnson
in the seventh inning. "We played very, very well. We got great
pitching, timely hitting. We played great defense. If we can just repeat that the next 161 games, we'll be fine.''

He was joking a little with that last line, but there's no doubt
the Dodgers, injury-free at last, are loaded with confidence.

"For the first time in the past three seasons, we're starting
out with a full deck,'' manager Jim Tracy said. "We have all our
pieces in place.''

Jordan improved his career average against Johnson to .333.

Nomo, 14-1 in his last 26 starts last season, struck out seven
and walked one in his eighth career shutout, his first since 2001.

"I made a couple of bad pitches, but I don't think the story is
on this side of the field,'' Johnson said. "I think it's over on
the other side. Hideo Nomo pitched extremely well. He's pitched
well against us in the past, so that shouldn't come as any
surprise. He picked up where he left off at the end of last year.''

Jordan, 20 pounds slimmer than last year and coming off knee
surgery, had a two-out RBI single off Johnson in the first inning,
and a two-out, two-run homer on his first pitch from the Big Unit in the sixth.

"He led me off with another slider, which he did the previous
two at bats,'' Jordan said, "so I was looking for it.''

Before the home-run pitch, with left-handed hitter Fred McGriff
on deck, Arizona manager Bob Brenly made a trip to the mound, a
move that obviously irritated Johnson.

"I don't know why Bob came out there, to be honest with you,''
Johnson said. "No disrespect for him, but I mean I'm pitching in a
game. I'm fully aware that Fred McGriff's on deck. If he comes out
there, I'd just as soon he take me out, but not tell me how to
pitch.''

Bret Prinz, who relieved Johnson, collapsed to the ground with a
strained right groin while pitching to Nomo with two outs in the
eighth. An MRI was planned Tuesday, and the Diamondbacks are
preparing as if the right-hander would be out for awhile.

"This is real frustrating,'' said Prinz, who worked his way
back through the minors after an awful start with the Diamondbacks
last season. "It's the nature of the beast, I guess. It's just
another bump that I'm going to have to get through, and I will.''

Johnson, who led the NL in wins, strikeouts and ERA last season,
entered 5-0 in 11 opening-day starts since 1992. He had won his
previous three openers with Arizona, but the 39-year-old
left-hander allowed five runs, three earned, on nine hits in 6 2/3
innings. He struck out five, walked two and hit a batter.

It was Johnson's second consecutive rough outing at Bank One
Ballpark. He gave up six runs and 10 hits in Arizona's 12-2 loss to
St. Louis in the opener of last season's playoffs.

Nomo held Arizona without a hit until Tony Womack drove the ball
over the head of center fielder Dave Roberts leading off the
fourth. Womack tried to stretch the hit into a triple, but was
thrown out on the relay by shortstop Cesar Izturis.

Womack's fielding error at shortstop allowed Dave Roberts to
reach base leading off the sixth. Roberts stole second, then
advanced to third on Lo Duca's sacrifice bunt. First baseman Lyle
Overbay made a tough play on Shawn Green's hard grounder for the
second out, but Jordan hit Johnson's first pitch into the
left-field seats to make it 3-0.

Game notes
Dodgers batting coach Jack Clark remained in stable
condition at a Phoenix hospital after he was injured Sunday in a
motorcycle accident on his way to a team workout at Bank One
Ballpark. ... The roof at Bank One Ballpark was closed for the
first four innings because of the sun's glare, but was opened after
that when the entire field was in the shade. ... Oscar Villarreal,
21, replaced Prinz for his major league debut and struck out Nomo
with one pitch.