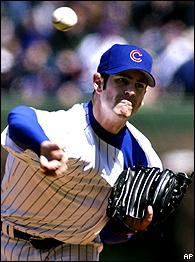 Matching pitch for pitch, strikeout for strikeout, he and Javier Vazquez got into a good, old-fashioned pitcher's duel Wednesday
afternoon. Only one bad pitch separated them, but that was all
Prior needed to get his first major league shutout.

"It was a lot of fun,'' Prior said after the Chicago Cubs' 3-0
victory over the Montreal Expos. "All around, it was a good day.''

Even the Expos agreed.

"This is baseball at its best: Playing at Wrigley Field, two
good pitchers on the mound throwing toe-to-toe,'' Expos catcher
Michael Barrett said. "Unfortunately we were at the losing end,
but it was still just a great game to be a part of.''

Prior and Vazquez combined for 26 strikeouts while walking none.

Prior (2-0) scattered four hits and struck out 12 for the second
complete game of his young career, retiring 16 straight at one
point. His only extra-base hit was a double by Orlando Cabrera in
the seventh.

Vazquez (1-1) struck out a career-high 14 in seven innings,
fanning two in every inning but the fifth. He scattered five hits
over seven innings.

But one of those hits was a first-pitch, two-run homer by Damian Miller, and that was enough to decide the game. Miller also had a
single and a double, finishing the day 3-for-3.

"I made a mistake to Damian Miller, and that was probably the
game right there because Prior was lights out today,'' Vazquez
said. "He controlled the whole game.''

Prior even added an insurance run in the eighth, faking a bunt
and then swinging away for an RBI single.

"Mark certainly pitched like a champion today,'' Cubs manager
Dusty Baker said. "That was one of the best performances by a
young man I've ever seen.''

Great things have been expected of Prior since the Cubs picked
him second overall in the 2001 draft. He made just nine starts in
the minors, and went 6-6 with 147 strikeouts and a 3.32 ERA after
being called up in May.

On Wednesday, he was practically untouchable. He set the tone
with his first batter, needing only three pitches to strike out
Endy Chavez. He gave up a single to left to Henry Mateo, then shut
the Expos down tight.

He was perfect through the next 5 1/3 innings, retiring 16
straight. Prior struck out seven during that stretch, and the Expos
could get only two balls out of the infield. The closest they came
to a hit was Barrett's chopper down the third base line in the
third.

But umpires ruled that the ball had bounced foul before it
reached third base, and Barrett went back to the plate. He wound up
hitting a fly ball to center.

"It's kind of silly to think a 22-year-old can do what he did
today,'' Miller said. "It's unheard of. But we'll definitely take
him on our team.''

The Expos finally got another hit off of Prior in the sixth,
when Chavez singled through the hole at short with two outs.

Prior allowed only two more hits the rest of the way, and
finished the day by striking out Jeff Liefer with his 113th pitch.
The crowd was chanting ``Prior! Prior!'' with Liefer at the plate.

"The crowd was awesome. They helped out big-time at the end,''
Prior said. "That's why it's such a blast to play here.''

Prior now has double-digit strikeouts in seven of his 21 major
league starts.

"How fun was that?'' Miller asked. "It's a pretty impressive
outing.''

It had to be with the way Vazquez was pitching. Vazquez retired
five of his first seven batters, striking out four of them. His
only trouble came with two outs in the second, when Miller sent the
first pitch he saw soaring out to left field.

It looked as if the 12-mph wind might keep it in the park, but
the ball got enough carry and dropped just beyond the fence for a
two-run homer.

It was the first home run allowed by an Expos starter this year,
and only the third overall.

After the second inning, the Cubs managed only two more hits off
Vazquez and never threatened to score.

"He pitched a perfect game in my book except for one pitch,''
Barrett said. "Unfortunately, that's all they needed.''

Game notes
Prior beat the Colorado Rockies 4-1 on Aug. 4, 2002, for
his only other complete game. ... Cubs SS Alex Gonzalez struck out
four times, snapping his seven-game hitting streak. ... There were
a total of 27 strikeouts in the game, an Expos record, and no
walks.