Millwood, acquired from Atlanta last December, struck out 10 and
walked three to record the ninth no-hitter in team history.

His gem came on the first anniversary of the last no-hitter in
the majors, by Boston's Derek Lowe against Tampa Bay.

"It was one of those special days, and I don't plan on doing it
every time out, but it was a lot of fun,'' Millwood said.

"I noticed it in the fifth, but it was like, well, I still got
four innings to go,'' he said.

Using a sharp fastball and a slow curve, Millwood kept Barry
Bonds and the other Giants' hitters off-balance throughout the
afternoon -- and kept the crowd of 40,016 cheering at Veterans
Stadium.

Maddux (four), Glavine (two) and Smoltz (one) have seven Cy
Young awards among them, but none has a pitched no-hitter. The trio
has three one-hitters, two by Maddux and one by Smoltz. 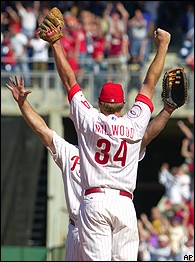 "That was cool,'' said Maddux, who watched on a clubhouse
television as Atlanta played Milwaukee at Turner Field. "I really
enjoyed it. I was probably more nervous than he was.''

Millwood retired Bonds three times, striking out the
single-season home-run king in the seventh. Bonds hit a long drive
to right that Bobby Abreu caught near the wall in the fourth.

Marquis Grissom came the closest to getting a hit, but center
fielder Ricky Ledee raced back and made a leaping one-handed catch
on his hard liner to right-center to start the seventh.

"I was just praying that Ricky would make a great play and he
did,'' Millwood said.

Grissom hit a routine fly ball to Ledee for the final out of the
game. Ledee homered for the game's only run.

The Braves traded Millwood to the Phillies for catcher Johnny
Estrada in December in a cost-cutting deal.

When Grissom lofted the final fly ball, Millwood (4-1) put his
right finger up the air and held it there as Ledee made the catch.

Phillies newcomer Jim Thome was the first teammate to reach
Millwood, coming over from first base and embracing the pitcher on
the mound.

Catcher Mike Lieberthal hugged Millwood and manager Larry Bowa
pumped his fist as he ran from the dugout. But Bowa couldn't get to
Millwood as the Phillies surrounded him.

Millwood tipped his hat twice to the fans, who stood the last
two innings to root him on.

The last Phillies pitcher to throw a no-hitter was Tommy Greene
against Montreal on May 23, 1991.

Philadelphia's Terry Mulholland pitched the only other
nine-inning no-hitter in Veterans Stadium history against the
Giants on Aug. 15, 1990.

Down in Atlanta, the Braves also cheered. Maddux was charting
pitches in the clubhouse when he noticed what Millwood was doing
through the early innings.

"I had a hard time watching our game. We had the Astros on, who
we play next, and Millie throwing a no-hitter,'' Maddux said.

Said Braves manager Bobby Cox: "I saw the end of Kevin's no-no.
That was sensational. You know, he flirted with that a lot here,
through five innings.''

Ledee gave Millwood all the runs he needed with a first-inning
homer off Jesse Foppert (0-2), who made his second major league
start.

Foppert allowed one run and three hits in six innings. The
right-hander gave up five runs in the first inning of a 5-3 loss to
Pittsburgh in his first start.

Game notes
Millwood also has one career one-hitter against Pittsburgh
on April 14, 1998. ... Montreal's Pascual Perez pitched a
rain-shortened, five-inning no-hitter at the Vet on Sept. 24, 1988.
... This is the last season for the Phillies at the Vet.