ATLANTA (AP) -- This was about as rare as it gets in baseball. 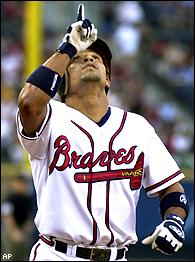 An unassisted triple play? Nah, there's been 11 of those. A
perfect game? Not even close. That's been done a whopping 14 times.

The Atlanta Braves became only the second team in major league
history to start a game with three straight homers and went on to a
15-3 rout of the Cincinnati Reds on Wednesday night.

"I'll be darned,'' manager Bobby Cox said. "That's only the
second time it's ever happened? I'm sure it's the first I've ever
seen it.''

Rafael Furcal, Mark DeRosa and Gary Sheffield began the game
with back-to-back-to-back homers against Jeff Austin. Before the
inning was done, Javy Lopez hit a two-run homer to knock out the
Reds starter.

The only other team to start a game with three straight homers
was the San Diego Padres. Marvelle Wynne, Tony Gwynn and John Kruk
accomplished the feat against San Francisco on April 13, 1987.

"I've seen times when everyone up and down the lineup is
hitting, but not anything like this,'' said Braves starter Russ
Ortiz, who was given an 11-0 lead after three innings.

For good measure, the Braves tied a franchise record with four
homers in an inning. They finished with six homers, the most in a
game since May 31, 1996, at Cincinnati.

Furcal homered again in the second for the first two-homer game
of his career.

"I've never done that,'' he said. "Not even back in my
hometown'' growing up in the Dominican Republic.

Austin (2-3) became the first pitcher in 11 years to get knocked
out of two straight starts without making it through the first.
Last Friday, the right-hander failed to get an out against Florida,
giving up five runs on three hits and four walks in an 8-4 loss.

"It was awful,'' manager Bob Boone said. "He feels horrible.''

Not surprisingly, Austin was demoted to Triple-A Louisville
right after the game.

"My goodness, this team is definitely better without me on
it,'' Austin said. "I'm surprised I've stayed here this long.''

Lopez had three hits and four RBIs as the Braves scored in
double figures for the 10th time this season. They reached that
plateau only nine times all last season.

"I'm just trying to stay out of the way and let these guys do
their thing,'' Braves hitting coach Terry Pendleton said.

The Braves scored five runs in both the first and third innings
to make things easy for Ortiz (7-3). The right-hander worked six
innings, giving up two hits and two runs.

In keeping with the theme of the night, Ortiz also had a
run-scoring single.

"It's great watching these guys swing the bat,'' he said. "I
love it. It helps me go out there more relaxed. I know I need to
get those guys back in as soon as possible.''

Jung Bong pitched the last three innings for his first career
save.

Furcal led off against Austin with a drive into the right-field
seats. On the very next pitch, DeRosa homered to center. Sheffield
then launched a shot to the stands in left, causing Austin to stomp
around the mound in disgust.

The three homers came in the space of six pitches.

Austin retired the next two hitters, including a flyout by
Andruw Jones that was caught at edge of the warning track. But
Robert Fick walked and Lopez homered to left-center to make it 5-0.

Austin kneeled on the mound in disbelief, then turned his back
to the Reds dugout, perhaps in the vain hope of getting one more
chance. But Boone called in Joey Hamilton from the bullpen, and
Austin jogged off the mound to sarcastic cheers from the Turner
Field crowd.

This was the seventh time the Braves hit four homers in an
inning. Most recently, Wes Helms, Jones, Brian Jordan and Lopez
went deep against San Francisco on May 20, 2001.

The Braves weren't cheated against Austin, who gave up two
drives estimated at more than 400 feet. In all, the first-inning
homers covered 1,585 feet -- about three-10ths of a mile.

The last pitcher to get knocked out of two straight starts in
the first was Cleveland's Scott Scudder. He got only one out
against Toronto on Sept. 17, 1992, then failed to retire anyone at
Boston seven days later.

"After that last outing, I didn't want to walk anybody,''
Austin said. "So I threw strikes, and they hit them.''

Game notes
The Reds were outhit 18-3. They had only seven hits in the
last two games of the series. ... Austin has an ERA of 134.33 in
his last two starts. Overall, his ERA climbed to 8.78. ...
Hamilton, recalled from Triple-A Louisville before the game, had to
take one for the team after replacing Austin in the first. Hamilton
threw 99 pitches in relief, giving up nine runs and 12 hits in 5
2-3 innings. ... Furcal homered leading off a game for the second
time this year and seventh time in his career. ... Mario Soto was
the last Cincinnati pitcher to give up four homers in an inning.
That occurred on April 29, 1986, against Montreal. ... Matt Franco
didn't even start the game and had as many hits as the Reds. He had
three hits after entering the game in the fourth, including a
homer. ... The Braves tied their season high for runs.