CHICAGO (AP) -- Roger Clemens and his traveling road show are
going back to where it started, still searching for that elusive
300th victory. 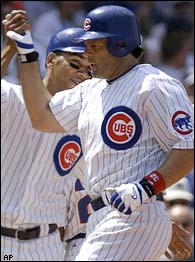 The Rocket got outpitched by Kerry Wood, then had to watch as
his bullpen blew his lead with its very first pitch and delayed his
entry into one of baseball's most exclusive fraternities.

Clemens has been stuck on 299 career victories for three starts
now, the pressure building with each one.

"I apologized to Roger. Nobody wants to go in and screw up,"
said Juan Acevedo, whose gave up the three-run homer to substitute
Eric Karros that sealed the Chicago Cubs' 5-2 victory over the New
York Yankees on Saturday.

Shortly after Clemens left the game, the Yankees announced he
had an upper respiratory infection and wouldn't be speaking with
the media after the game.

"I really don't think it affected my pitching," Clemens said
on a quote sheet that was distributed to the nearly 500 media
members assembled for the game.

Karros was only in the game after a scary collision in the
fourth inning sent Cubs first baseman Hee Seop Choi to the
hospital.

A group of about 40 family members and friends have traipsed
around the country the past two weeks, hoping to see him become the
21st pitcher to win 300 games.

Now they have to pack their bags once more.

Clemens (6-4) will face St. Louis at Yankee Stadium on Friday
night, trying to become the first pitcher since Nolan Ryan in 1990
to reach 300.

Clemens lost to Boston in his first bid, then blew a six-run
lead at Detroit.

"All it means is we have to answer a bunch more questions,"
Derek Jeter said. "I think he's just putting it off until we get
to New York."

If any setting was ever perfect for Clemens to get the milestone
victory, Saturday was it. He'd never pitched at Wrigley Field,
spending the 1990 All-Star game on the bench.

And this weekend, the Yankees are visiting the ballpark for the
first time since the 1938 World Series, with the atmosphere as
electric as any playoff series.

"The stadium was out of control," Wood said. "The fans were
great. Sometimes in the dugout you couldn't even hear yourself
think. It was awesome to be a part of."

Topping it all off was the matchup: the Rocket vs. Kid K.

Like Clemens, Wood is a tall Texan with a sizzling fastball, and
he was drawing comparisons to the Rocket even before he stepped on
a big league mound.

In just his fifth start, he matched Clemens' 20-strikeout
record, throwing a one-hitter against the Houston Astros.

And Wood (5-4) brought that same nasty stuff with him Saturday,
getting his 50th career victory and first win since April 29. He
gave up just one run and three hits in 7 2-3 innings and struck out
11.

Wood's idol growing up was another Texan -- Ryan, whose No. 34 he
wears -- but it was clear how much this game meant to him. And it
took on even more meaning when Choi got hurt in the fourth inning.

The Cubs had a shift on, and Jason Giambi hit a high popup
toward third base. With third baseman Lenny Harris all the way over
near second, Choi and Wood came in to grab the ball about 20 feet
from home plate.

The next thing he knew, the two were colliding. Wood's glove hit
Choi in the face, knocking him backward. And with nothing to break
his fall, the 6-5, 240-pound rookie slammed into the hard dirt of
the basepath.

Choi lay motionless for more than 10 minutes trainers and
doctors rushed to his aid and the worried Cubs gathered around him.
Wood was particularly upset, and reliever Mike Remlinger came out
to comfort him.

"I just tried to tell him, if he needed a reason or something
to focus on, to keep himself going, make sure he finished the job
for Hee Seop," Remlinger said. "Because he would want nothing
else than that."

Wood crouched down on his knees and bowed his head as the
ambulance left the field with its siren wailing. But when he stood
back up, it was with an even greater intensity than he had before.

He struck out Jorge Posada to end the inning, and had eight
strikeouts through the first five innings. He retired 14 of his
first 15 batters, and didn't allow a hit through 4 2-3 innings.

His luck appeared to run out when Hideki Matsui homered to right
on a 3-2 pitch, giving the Yankees a 1-0 lead. With the way Clemens
was pitching, it looked as if that might be enough for the Yankees
to improve to 6-0 at Wrigley Field.

"You can't give up runs against him, against that team," Wood
said. "After the home run, I thought, 'OK, we've got to stop it
right there and hopefully we can put something together.' "

Clemens had allowed just two hits through his first six innings,
dazzling the fans with fastballs that reached into the high 90s _
he hit 99 mph on a pitch to Sammy Sosa.

But after striking out Corey Patterson to start the seventh,
things fell apart.

Sosa -- who hit his first career home run off Clemens -- singled
to left. Clemens then walked Moises Alou on five pitches. With
Clemens sick, that was enough for Yankees manager Joe Torre.

"We knew that he was starting to run out," Torre said. "Not
pitch count-wise, it was just that whole upper respiratory that
he's been fighting for a week."

As Cubs fans jeered and Clemens muttered, Torre patted his
pitcher on the head and sent him to the dugout.

"Roger never wants to come out of a game, but when you see him
every time he pitches, you can pretty much make an evaluation,"
Torre said. "Today's game was nothing like last week. I felt very
comfortable. Guys were in a good frame of mind."

But Acevedo served up a long homer to Karros on the first pitch,
giving Chicago a 3-1 lead and prolonging Clemens' date with
history.

"I'm sure Joe Torre had a good reason to take him out," Karros
said. "He threw a great game. And nine times out of 10, I'm
probably not going to hit a three-run homer."

Clemens allowed two runs and three hits in 6 1-3 innings. He
struck out five, leaving him four short of 4,000 for his career,
and walked one.

The Yankees threatened in the eighth, loading the bases with two
outs before Mike Remlinger struck out Giambi. As Giambi whiffed
mightily, Wood exchanged high-fives in the dugout with his
teammates.

Jorge Posada hit a solo homer off Joe Borowski in the top of the
ninth and then gave up back-to-back singles to put runners at the
corners with two outs.

But with the Wrigley Field crowd of 39,363 on its feet chanting
Choi's name, Borowski set Juan Rivera down swinging.

"We definitely didn't want Clemens to get 300 here," Wood
said. "We don't like to lose at home, and we don't want any
milestones set at our place against us."

Game notes
Wood has struck out 10 batters in three straight starts.
... The Yankees won four times at Wrigley in sweeping the 1932 and
1938 World Series, and took Friday's opener.