NEW YORK (AP) -- It took a record six pitchers to no-hit the New
York Yankees, and that wasn't the only bizarre thing about the
Houston Astros' big night in the Bronx. 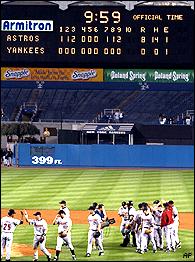 Forced to scramble after ace Roy Oswalt was injured, five
relievers finished off the first no-hitter against the Yankees in
45 years.

"First appearance for most of us in Yankee Stadium," Wagner
said. "What better place could there be? This is like the history
book."

It was the most pitchers ever to combine on a no-hitter in major
league history -- twice, four had done the trick.

Since then, the franchise has won nine World Series titles
and 15 AL pennants.

The last time New York was held hitless at Yankee Stadium was on
Aug. 25, 1952, by Detroit's Virgil Trucks.

With Yankees' fans standing and applauding, Wagner pumped his
fist as he stepped on first base to end it. Many the Astros ran
onto the field to give high-fives while the Yankees couldn't clear
out of the dugout fast enough.

"This is one of the worst games I've ever been involved in,"
Yankees manager Joe Torre said. "It was a total, inexcusable
performance."

Torre called it the low point for the Yankees since he started
managing the club in 1996.

New York dropped out of first place in the AL East, falling a
half-game behind Boston. Torre held a team meeting after the loss.

"Tonight was an ugly, ugly performance," he said. "Once
things started snowballing, I think we lost our composure."

Wagner, who kept the final ball, couldn't even hear the crowd as
he wrapped up Houston's eighth win in nine games.

"My heart was about to pound out of my chest," he said.

The closest New York came to a hit was in the fifth inning
against Saarloos, when Alfonso Soriano sent a fly ball into short
left field. Lance Berkman, who hit a two-run run homer in the third
inning, ran in, stuck out his glove and made a tumbling catch.

"It wasn't that close," Berkman said. "It probably looked
more spectacular than it really was."

Third baseman Geoff Blum made a barehanded pickup on Juan Rivera
in the third inning and threw him out at first.

"One guy usually goes out there and does it," Astros manager
Jimy Williams said. "Maybe two, but not six."

By the time the Astros returned to their clubhouse, the Yankees
had left a bottle of champagne in front of the locker of all six
pitchers.

"That's how the Yankees are, they're pretty classy," Wagner
said.

Many of the Astros hadn't even realized a no-hitter was in
progress until the late innings -- Wagner said Jeff Kent didn't even know it at the end of the game. But out in the bullpen, Wagner knew
it would come down to him.

"I'm sitting out there going, 'Oh my goodness,'" Wagner said.
"Jimy doesn't even have to call."

Astros pitchers combined for 13 strikeouts, including four by
Dotel in the eighth, which tied the major league record for an
inning. Soriano reached during the inning when he struck out on a
wild pitch.

Wagner struck out Jorge Posada and pinch-hitter Bubba Trammell
to start the ninth. He then got Hideki Matsui to ground to first
base with one pitch to complete the Astros' 10th no-hitter, the
first since Darryl Kile against the New York Mets on Sept. 8, 1993.

This was the second no-hitter in the majors this season. Kevin Millwood pitched one for Philadelphia on April 27 against San
Francisco.

And it came on the 65th anniversary of Johnny Vander Meer's
first no-hitter. The only pitcher to throw consecutive no-hitters,
he started that streak on June 11, 1938, for Cincinnati against the
Boston Braves.

Overall, it was the third no-hitter in a game between AL and NL
teams, and all of them have been at Yankee Stadium.

The other two were perfect games -- Don Larsen did it against the
Brooklyn Dodgers in the 1956 World Series and by David Cone against
Montreal on July 18, 1999.

Oswalt strained his right groin and left in the second inning.
He looked toward catcher Brad Ausmus after his second pitch of the
inning, his 23rd of the game, and immediately was replaced.

Oswalt originally hurt his groin May 15 while running the bases
against Pittsburgh and was on the disabled list until May 31. He
planned to return to Houston on Thursday for an MRI, and the team said he was day-to-day.

"I actually felt it against (Jason) Giambi in the first
inning," Oswalt said.

Munro pitched 2 2/3 innings, Saarloos 1 1/3 innings and Lidge
(4-0) went two innings. Dotel threw the eighth and became the 44th
pitcher in major league history to strike out four in an inning.

"The first time to step on the Yankee Stadium mound and be part
of a no-hitter is something special, something I'll never forget,"
Saarloos said.

Dotel and Wagner combined to fan six straight hitters before
Matsui grounded out.

Munro grew up in Flushing, N.Y., near Shea Stadium. He was a fan
of the Mets and rooted against the Yankees.

New York, just 16-24 since its 20-4 start, looked awful
throughout, with physical and mental miscues.

Jeff Weaver (3-5), repeatedly booed by the fans, appeared
uncomfortable in his first start since May 31. He had been dropped
from the rotation after owner George Steinbrenner wanted Jose Contreras to start, and was back only because Contreras went on the
disabled list earlier this week.

Weaver gave up a double to Craig Biggio leading off the game and
allowed him to score on a two-out wild pitch.

Orlando Merced tripled off Rivera's glove in left field in the
second and scored on Jose Vizcaino's sacrifice fly. After Berkman's
homer -- which extended his hitting streak to 17 games -- landed in
the upper deck -- Weaver could only stare at the plate under his
cap, pulled low, while he waited for the umpire to give him a new
ball.

Weaver stayed in for 6 1/3 innings, allowing five runs and 10
hits.

"All of us made some tough choices out there tonight, and we
didn't come through," Weaver said. "But then again, these are
things that build you as a team. You have to look at the bright
side -- from here you can only go up."

Game notes
Vida Blue, Glenn Abbott, Paul Lindblad and Rollie Fingers
combined for a no-hitter for Oakland against California on Sept.
28, 1975. Bob Milacki, Mike Flanagan, Mark Williamson and Gregg
Olson combined for a no-hitter for Baltimore at Oakland on July 13,
1991. … Derek Jeter has struck out in 12 of his last 19 at-bats.
… Oswalt will return to Houston on Thursday for an MRI of his
groin.