NEW YORK (AP) -- Roger Clemens got his milestones two at a time. 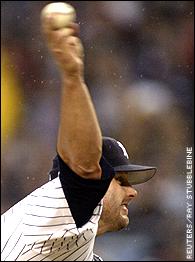 The Rocket finally reached 300 wins Friday night and entered an even more exclusive club, becoming only the third pitcher with 4,000 strikeouts as he led the New York Yankees over the St. Louis Cardinals 5-2.

"We just talked about it for so long and for it to happen now is just a thrill -- especially in front of all these people," Clemens said.

A sellout crowd of 55,214 cheered while Clemens' teammates hugged him in the dugout after the final out.

Clemens jogged onto the field as Elton John's "Rocket Man" played over the public-address system. He raised both arms, tipped his cap to the fans in right field, then to left, then touched his heart.

Clemens walked back to near the Yankees dugout and one of his two youngest sons jumped into arms as his wife, Debbie, gave him a hug.

Two more of Clemens' four sons scooped up dirt off the mound and put it in a bag as a keepsake as the fans chanted his name. Even a few Cardinals remained in the dugout to watch.

Many family members and friends had followed him from city to city for the past three weeks, wanting to be on hand for his history-making night.

But his mother, Bess, suffering from emphysema and coming off a bout with pneumonia, was well enough to attend only his first try.

Clemens got teary-eyed as he talked about her.

Flashbulbs popped from Clemens' first pitch. Even though the game was played in a drizzle, the excitement over his quest created a postseason feel for the first game that counted between the Yankees and Cardinals since the 1964 World Series.

"It's a lot of hard work, and I was glad I was able to get through this," Clemens said. "I have to go back to work tomorrow."

Phil Niekro was the only other pitcher to win his 300th game while playing for the Yankees. The knuckleballer did it at Toronto in 1985 while wearing a road gray uniform, making Clemens the first to do it in Yankees pinstripes.

Clemens started strongly, striking out six of his first eight batters -- his first six outs all came on strikeouts. But coming off a 10-day bout with bronchitis, Clemens labored noticeably in the fourth and fifth innings, stranding three runners, and twice failed to protect one-run leads.

Yankees manager Joe Torre was booed loudly when he walked to the mound to remove Clemens with two outs in the seventh inning and Cardinals' No. 2 hitter, J.D. Drew, coming up.

Clemens, who allowed six hits and two walks, got a standing ovation from the crowd as he walked to the Yankees dugout on the first-base side, twice tipping his cap.

Torre waited out at the mound, then was booed again as he returned separately to the dugout. The booing intensified when Drew bunted for a single on Hammonds' first pitch and Albert Pujols singled him to second. Hammond escaped the jam when Jim Edmonds grounded out.

"I told Roger after the game, 'I used to be popular here,'" said Torre, who has led the Yankees to four World Series titles.

"I would have booed, too, if I had been sitting in the stands. They wanted Roger to pitch the complete game, but that wasn't going to happen where his pitch count was," he said.

Hideki Matsui, Ruben Sierra and Raul Mondesi all homered off Jason Simontacchi (4-4) to provide the offense for New York, which has won two straight since six Houston pitchers patched together the first no-hitter against the Yankees in 45 years.

Clemens, who came to New York in 1999 after 13 seasons with Boston and two with Toronto, got his 299th win on May 21 at Fenway Park, but five days later lost 8-4 to the Red Sox at Yankee Stadium. The bullpen then wasted leads June 1 at Detroit and June 7 in his first start at Chicago's Wrigley Field.

Clemens looked pumped at the beginning, blowing fastballs and split-fingered pitches past helpless Cardinals' batters. He struck out his first three batters, moving within one of 4,000. Then after allowing a home run and a double at the start of the second, he got Edgar Renteria to miss a 3-2 pitch.

Catcher Jorge Posada went out to the mound to shake Clemens' hand, and the ball was taken out of play.

Posada's opposite-field RBI double to left put the Yankees ahead in the first, but Edmonds' 18th homer tied the score in the second. Matsui's homer gave New York a 2-1 lead in the bottom half, but Tino Martinez, in his first game at Yankee Stadium since leaving New York after the 2001 World Series, tied it again with a sacrifice fly in the fourth.

Sierra put New York ahead to stay in the bottom of the fourth with his first homer since the Yankees acquired him from Texas on June 6. Mondesi hit a two-run homer in the seventh after Sierra singled.

After Hammond's tightrope walk in the seventh, Osuna pitched a perfect eighth and Rivera finished for his eighth save in nine chances.

Game notes
Clemens tied a season high with 10 strikeouts. ... Clemens has 104 double-digit strikeouts games, trailing only Ryan (215) and Randy Johnson (188). ... Only three pitchers took longer to get from 299 to 300, according to the Elias Sports Bureau. Niekro and Old Hoss Radbourn reached the mark on their fifth tries, and Early Wynn did it on his seventh -- the final victory of his career. ... Martinez, given several standing ovations, went 0-for-3.