Dunn bowled over Philadelphia catcher Mike Lieberthal as he
tried to score after the Cincinnati Reds had built a double-digit
lead, then charged the mound and sparked a brawl during a 15-1 victory Friday night. 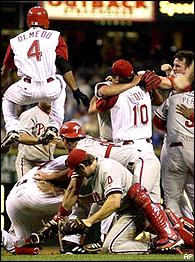 Phillies manager Larry Bowa and two players from each team were
ejected after both benches and bullpens emptied and players squared off.

"At that point, it's not about baseball anymore,'' said Reds
first baseman Sean Casey, who was ejected along with Dunn.

Dunn, a football player at Texas who is the biggest player on
the Reds, went after reliever Carlos Silva after he threw two
inside pitches in the sixth. The first was just under his knees, drawing a warning from plate umpire Doug Eddings.

The next pitch was another fastball behind Dunn's back. Eddings immediately ejected Silva --Bowa got an automatic ejection as well
-- and Dunn hesitated.

The 6-foot-6, 240-pound outfielder tightened his batting glove and sprinted for the mound, but Lieberthal tackled him around the
legs from behind just as he got there.

"I remember someone on the bench saying, 'Hey, be ready, they might throw in there,'" Dunn said.

"He threw the first pitch and you say, 'OK, maybe he's just trying to come inside.' But when a big league pitcher throws one behind you, it's obviously a purpose pitch."

As Dunn lay on the ground after he was tackled, Silva stepped forward and took a big swing with his right arm. His hand appeared
to barely graze the top of Dunn's bare head.

That swing made the Reds livid.

"Adam's one of my great friends," said Casey, who was screaming at Silva and trying to get to him as the fight wound down.

"When a guy takes an unbelievable swing like that, you have to try to defend him."

Silva declined comment. Closer Jose Mesa also was ejected for
the Phillies for mixing it up during the brawl, which overshadowed
a two-homer, five-RBI game by Jason LaRue and a breakthrough win
for Jimmy Haynes (1-5), who pitched a three-hitter for his first
victory since Sept. 24.

Dunn hit his 21st homer in the third inning, then got the Phillies fuming over his hit on Lieberthal in the fifth. He was
waved home as he tried to score from second base on Ken Griffey Jr.'s single with the Reds ahead 10-0.

Lieberthal got the ball long before Dunn arrived. Dunn lowered his left shoulder and bowled him over, but Lieberthal held on for the out.

Lieberthal didn't object to Dunn's hard hit, saying, ``I think it's part of the game. Anytime anyone wants to take out the
catcher, it's fine as long as it's not a cheap shot to the face with a forearm."

Lieberthal wasn't surprised when Dunn ran for the mound after the second inside pitch.

"I don't know if Silva was trying to hit him," Lieberthal said. "Nobody talked about it (on the bench). If he was, it's
pretty awesome that he's protecting one of his players."

The hard feelings grew as the Reds pounded Millwood and turned the tables on the Phillies, who scored a club-record 13 runs in one
inning during their last game at Great American Ball Park.

There were no incidents during the April 13 game, which the Phillies won 13-1. But tempers flared as the Reds hit three homers,
piled up 22 hits and mixed in a little rough-and-tumble play on Friday.

The Reds finished with season highs in hits and runs. Every starter had at least one hit, and Haynes had a pair of singles.

Aaron Boone had three hits and four RBIs, Casey singled in each
of his four at-bats, and shortstop Barry Larkin returned from his
second stint on the disabled list and had two hits.

The Phillies managed only David Bell's single through the first
seven innings off Haynes, who lost his shutout on Jason Michael's pinch-hit homer in the eighth. It was his second career complete
game.

Game notes
The 22 hits were most allowed by the Phillies since the Giants got 23 on May 28, 1993. ... It was Millwood's
second-shortest start. He lasted three innings in his second start of the season, leaving with a strained groin. ... Boone has four
straight multihit games. ... Dunn's homer ended an 0-for-18 slump. ... It was LaRue's fourth two-homer game. He was 0-for-11 heading
into the game. The five RBIs tied his career high. ... It was the Reds' most hits since they also had 22 on June 6, 1999 at Kansas City.