CINCINNATI (AP) -- The Reds' new home turned into Great American
Brawl Park for the second time in a week, with Paul Wilson getting
the worst of it.

Wilson held Sammy Sosa to a harmless single in seven strong
innings, then was bloodied and ejected during a fight that will
have an impact far beyond Cincinnati's 3-1 victory Thursday over
the Chicago Cubs. 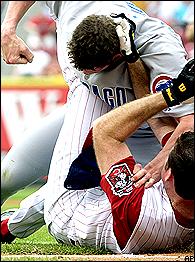 Neither team is in a mood to forget.

"I've got a question: Didn't they just get into a fight a
couple days ago?'' Cubs manager Dusty Baker said. "It looks like
they've got some bad blood brewing with some other people.

"All I know is we're not the club to have bad blood with
because we've got some guys that can hurt you with that ball. So I
don't suggest too many people get into some knockdown war with
us.''

The Reds and the Phillies squared off last Friday in a much
nastier fight. Sean Casey and Adam Dunn were the two Reds ejected,
and they await punishment from baseball.

Wilson got into it with reliever Kyle Farnsworth, who threw a
fastball inside as he tried to put down a sacrifice bunt with a man
on first and the Reds up 2-1 in the seventh inning.

Wilson wheeled after the pitch flew past and yelled at
Farnsworth, starting an exchange that escalated as they drifted
toward each other. Finally, Farnsworth tossed off his glove and
Wilson dropped his bat.

Farnsworth tackled Wilson with a right-shoulder takedown, then
threw a wild punch that missed its mark. The two players were
quickly blanketed by teammates.

Wilson (5-4), who gave up only three hits, left the field with
blood streaming from a cut on the bridge of his nose and red drops
spattered across his white jersey. He had a bandage on the nose
after the game.

Wilson wouldn't talk about the fight, which was had its origin
in the sixth inning. Cubs starter Mark Prior threw a pitch behind
catcher Jason LaRue in the bottom of the inning, and Wilson hit
Moises Alou on the leg with his first pitch in the top of the
seventh.

"He was coming inside with no respect,'' Reds manager Bob Boone
said of Prior, who didn't hit a batter in six innings. "There was
no question that Farnsworth threw at Wilson. He was squaring to
bunt. That's grounds for ejection right there.''

The two pitchers were the only ones ejected. Boone wasn't
surprised at how it all played out.

"You've got two teams fighting for first place or to stay in
the pennant race, and little things are upsetting,'' Boone said.
"Testosterone was flying around the field.''

They don't play again until Sept. 12 at Wrigley Field, where the
next act could play out.

"It's baseball. People will remember things,'' Prior said.
"It's a tight race, and it's going to be intense to begin with,
and this will probably carry over to the next time we play.''

Wilson's ejection gave the Cubs a chance to pull it out. They
loaded the bases in the ninth against Scott Williamson, who struck
out pinch-hitters Lenny Harris and Troy O'Leary to get his 17th
save in 18 chances.

Barry Larkin had three hits and drove in a run as the Reds
gained a split of their four-game series and dampened Sosa's return
from his suspension for using a corked bat. Sosa got two hits and
another mixed reception from the capacity crowd.

The Reds sold out his first two games back from the seven-game
suspension, a measure of the interest in the Cubs' slugger. The
Reds' only other back-to-back sellouts came during the Yankees'
first visit since 1976.

Sosa went 2-for-4 with a prodigious homer in his return
Wednesday night, when he heard more boos than cheers. He also got
the sharpest reaction from a crowd of 41,692 in the final game of
the series.

The cheers and boos were about evenly divided as he came to the
plate and grounded out in his first at-bat. Several youth groups
chanted "Sammy! Sammy!'' as he came to bat in the fourth and lined
a single to right field.

When he was on deck in the sixth, one fan behind the plate
screamed: "Hey, Sosa, your homers don't matter, your RBI don't
matter, your career doesn't matter. You're a joke!''

Third baseman Aaron Boone then robbed Sosa of a hit, making a
nice backhand stop on a grounder down the line. He also singled off
Williamson in the ninth, and declined to be interviewed after the
game.

Game notes
The Cubs finished their trip 5-5 and return to Wrigley
Field for an interleague series against the crosstown rival White
Sox. ... Sosa is 12-for-32 in his last eight games. ... Ken Griffey
Jr. was out of the Reds lineup for the third consecutive game with
a sore leg and hip. A precautionary MRI test on Wednesday night
found inflammation, but nothing serious. He replaced Wilson at the
plate after he was ejected in the seventh and lined out.