CHICAGO (AP) -- The taste of victory was so sweet Sammy Sosa
wanted to share it with his loyal followers in the right-field
bleachers. 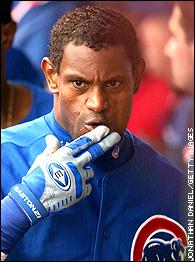 So, he sprayed them with celebratory champagne.

Many of his Chicago Cubs teammates jogged around the perimeter
of the outfield, followed by manager Dusty Baker, saluting the fans
and soaking up the delirious atmosphere at Wrigley Field.

"It's beautiful," Sosa said after his 40th homer helped the
Cubs sweep a doubleheader from the Pittsburgh Pirates 4-2 and 7-2
Saturday and win the NL Central.

"The city of Chicago has been yearning for this and it's
awesome," center fielder Kenny Lofton said. "We're in the
playoffs and that's a start. The fans haven't seen it in a while."

Baker's mission when he arrived as manager in November was to
change the Cubs, convert them from years of losing.

"I just said 'Why not us?''' Baker said. "This is only the
first step in a four-step process. We've got three steps to climb
and this club is willing and ready."

Sosa homered in the first and Matt Clement pitched 7 2/3 strong
innings as the Cubs earned their first division championship since
Don Zimmer led them to the NL East crown in 1989.

The victory touched off a raucous celebration at Wrigley Field
where 40,121 fans, many wearing coats on a chilly 60-degree day,
began to chant "Let's Go Cubs" in the seventh inning.

Fans stayed in their seats for more than an hour after the game
ended as players in championship T-shirts and caps mingled on the
field.

"They have been supporting us the whole year," Sosa said.
"This is the year. We are going to surprise a lot of people."

"They had a remarkable second-half run. I wanted my young guys
to see this tonight, this celebration, to see what they're playing
for," he said.

The Cubs are in the postseason for the first time since 1998
when they beat Baker and the San Francisco Giants in a one-game
playoff for the NL wild card.

Thanks to a Friday rainout, the Wrigley fans got to see two
memorable victories on the same afternoon. The Cubs got their
chance to clinch because of second-place Houston's 5-2 loss to
Milwaukee earlier in the day.

In the opener, Mark Prior pitched 6 2/3 impressive innings and
Damian Miller homered to spark a 4-2 victory in the opener.

Then, the Cubs moved quickly to wrap it up.

Sosa became the first NL player to reach 40 homers six straight
times with a 450-foot blast in the first off Ryan Vogelsong.

Clement (14-12) did the rest, allowing seven hits. He lost his
shutout and chance for a complete game when Abraham Nunez hit an
RBI triple and scored on a passed ball in the eighth.

The Cubs' long history of futility has been well-documented -- no
World Series appearances since 1945 and no World Series
championships since 1908.

"You have to think about leaving whatever has happened bad in
the past," Baker said on the day he was introduced as manager.

"You can't bring it forward with you. It's a new time, a new
day, a new era, starting over from zero."

Behind a young pitching staff headed by Prior and Kerry Wood,
the Cubs went to the top of their division.

In the first game, Prior (18-6) allowed seven hits and two runs,
striking out 10 and improving his record to 10-1 since coming off
the disabled list Aug. 4.

Prior wasn't watching the scoreboard, but the crowd certainly
was all during the first game as the Brewers helped the Cubs by
beating Houston for a second straight game.

They let out a collective cheer when the Brewers' early edge was
posted on the old scoreboard in center field. The roar got even
louder when Milwaukee increased the lead, and then it became
deafening when the final score was shown while the Pirates batted
in the eighth.

The Cubs overcame their share of distractions and injuries along
the way. Sosa was suspended for seven games for using a corked bat
and also went to the disabled list after surgery to remove a bad
toenail. He also survived an early-season beaning and regrouped to
reach 100 RBI for a ninth straight year.

The Cubs also lost center fielder Corey Patterson, who was
having breakout season, to a knee injury in July.

Baker had plenty of support before Saturday's doubleheader even
began.

His son, Darren, who served as a batboy for the Giants last
season, told him Friday night after the Astros lost to the Brewers
that good things were ahead.

"My little boy said, 'Yeah daddy, Houston is going to lose. I
told you. You are going to win tomorrow,''' Baker said.

Game notes
Vogelsong (2-2) lasted just 1 1/3 innings, giving up six
hits and five runs in the second game. Josh Fogg (10-9) lost in the
opener. ... Clement made his sixth start of the season against the
Pirates and finished 2-2 against them.