MINNEAPOLIS (AP) -- Warming up in the bullpen, Roger Clemens
heard the taunts from Twins fans: This was it for the Rocket.

"You just want to try and be defiant," Clemens said. "You
just don't want that to be the case."

Knowing this could be the final start of his storied career,
Clemens made Hideki Matsui's early home run stand up and led the
New York Yankees over Minnesota 3-1 Saturday for a 2-1 lead in
their AL playoff series.

Cruising through seven innings, Clemens quieted the Metrodome
crowd of 55,915 before letting Mariano Rivera take over for his
second straight two-inning save.

"When you see Roger Clemens pitching like that, you just follow
his steps," said Rivera, who has retired all 12 batters he's
faced.

Game 4 is Sunday, with Johan Santana pitching for Minnesota
against David Wells. If the Twins win, they'll play a decisive Game
5 at Yankee Stadium on Monday night.

"We've got two more games to go, as far as we look at it,"
Twins manager Ron Gardenhire said. "We feel good."

They'll have to start hitting, though, if they want to keep
going. The Twins managed only four hits against Andy Pettitte and
Rivera in a 4-1 defeat in Game 2 and are batting .179.

"We need some guys to step up and hit, and we'll see what
happens," center fielder Torii Hunter said. "Last year we were
down against Oakland. This is the same thing. Who knows what can
happen?"

Though the Twins didn't put up much of a fight, the adrenaline
rush for Clemens was as strong as ever.

"If you don't have that, maybe something's wrong with you," he
said. "I still have that, and I'm glad I do."

Nobody expected Clemens to be rattled, not even in the noisy
dome -- where the Twins are still 13-4 all-time in the playoffs and
where opponents often struggle with the dingy roof and the bouncy
turf.

Clemens gave up five hits, a run and a walk for the victory. He
struck out six in his 23rd career postseason start.

"He has a lot of pride," Yankees manager Joe Torre said.

The crowd was roaring from the start, moved by third-base coach
Al Newman's ceremonial first pitch to Gardenhire. Newman suffered a
hemorrhage in his brain Sept. 10 in Chicago and spent more than two
weeks in the hospital.

Kyle Lohse had a hopping fastball to match the early clamor in
his first career postseason start for the Twins. His first of five
strikeout victims, Derek Jeter, fanned in the first inning on a
neck-high 96 mph pitch. 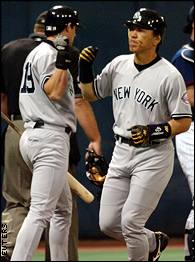 After the first inning, Torre told his team to be ready for the
high fastball.

With Bernie Williams on base after a leadoff double in the
second, the Japanese League star sent a first-pitch fastball into
the upper deck for a 2-0 lead.

"He's such a student of the game," Torre said. "It makes me
relaxed not having to say a lot of things to him."

Said Lohse: "I killed the momentum with the homer."

Clemens, who earned his first major league victory at the
Metrodome on May 20, 1984, with Boston, insists this season is his
last.

The 41-year-old right-hander put on a vintage performance,
spotting his fastball with perfection, keeping the Twins totally
out of whack and unable to start the aggressive running game that
helped them win Game 1.

Minnesota crept to 3-1 on A.J. Pierzynski's leadoff homer in the
third and had a runner on with two outs for Hunter in the fourth.
But Hunter struck out, his 13th in 23 hitless career at-bats
against Clemens.

"It's sad to see a Hall of Famer have to go," Hunter said.
"But maybe he'll come back so I can get my first hit off him."

Two-out singles in the fifth put runners at the corners for
rookie pinch-hitter Michael Ryan, who struck out in place of Luis
Rivas.

Doug Mientkiewicz singled to center to start the sixth and went
to second on a bobble error by Williams -- whose costly misplay in
Game 1 turned a single by Hunter into a triple.

But Clemens retired the next three -- Matthew LeCroy on a
groundout, Jacque Jones on a strikeout and Hunter on a groundout --
to silence the crowd and basically crush any chance the Twins had
of coming back.

They went 1-2-3 in the seventh, and Rivera struck out three.

Lohse took the loss on his 25th birthday, giving up six hits and
walking two in five innings.

Game notes
Williams went 2-for-3 with two walks (one intentional),
driving in rookie Juan Rivera with a single in the third. Williams
is 6-for-11 with three RBI in his career against Lohse. ...
Shannon Stewart has reached base in seven out of 13 plate
appearances for the Twins this series -- without scoring a run. ...
Hitting coach Scott Ullger has been filling in for Newman at third.
... Matsui hit 332 homers in 10 seasons with the Yomiuri Giants and
16 as a rookie this year for New York. That was his first homer in
these playoffs. ... Kenny Rogers struck out the side in the sixth
for the Twins, whose bullpen has a 1.69 ERA in 10 2-3 innings this
series.