MINNEAPOLIS (AP) -- The New York Yankees never panicked, even if some of their fans did.

The Yankees sure rediscovered their dominant postseason form in a hurry. They hit four doubles in a six-run fourth inning Sunday, breezing behind David Wells into the AL Championship Series with an 8-1 victory over the Minnesota Twins.

After a sloppy loss in the opener that brought back memories of last year's first-round flop against Anaheim, New York beat the Twins three straight times to clinch the AL Division Series 3-1.

"We fought our way through it," manager Joe Torre said. "We know there are a lot of distractions in New York. In the postseason, they're magnified."

A rested Yankees team will open the ALCS Wednesday night at home against Oakland or Boston.

"They're the best team in the league," Minnesota manager Ron Gardenhire said. "Somebody has to knock them off."

Wells improved to 9-2 lifetime in the postseason by going 7 2/3 innings for the Yankees. New York made it easy for him, sending 12 batters to the plate in the fourth and knocked out Twins starter Johan Santana.

"They're a confident bunch," Gardenhire said. "If they start hitting, they win a lot of games."

The big-budget Yankees are under increasing pressure to win it all this year after going consecutive seasons without a World Series title. They put themselves in a great situation by finishing off Minnesota on Sunday.

They'll have two days off to rest before Game 1 of the ALCS, while the Red Sox and Athletics play a decisive Game 5 on Monday night after making a cross-country trip to Oakland.

Pedro Martinez will pitch for Boston against Barry Zito on Monday, so neither ace would be ready to face the Yankees on Wednesday.

"I'd like to believe we have an advantage, but when you get to the postseason, the adrenaline gets you over that stuff," Torre said.

After hugs and handshakes on the field, the Yankees celebrated -- it was controlled, but there was plenty of champagne -- in a crowded clubhouse.

"It's exciting for me to finally enjoy one," said Jason Giambi, who has never been out of the first round. "But it isn't just for one round." 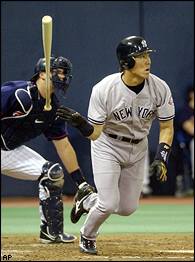 The Twins, who beat Oakland in the first round last year, will have to settle for two straight AL Central titles after back-to-back playoff appearances for the first time since 1969-70.

A leg cramp limited Santana's Game 1 outing to four shutout innings. After retiring 10 of his first 11 batters, Santana's success came to a screeching end with one out in the fourth. A stunned, silenced crowd of 55,875 watched the Yankees bash balls all over the field.

They hit four doubles in the inning, a division series record, and hung the Twins' best pitcher with six runs. Santana gave up six hits and a walk in 3 2/3 innings, striking out three.

"Johan's a nasty guy, and they hit him hard," Hunter said. "I can't believe that."

Johnson, batting ninth and stuck in an 0-for-26 slide, ripped a two-run double to make it 4-0. Juan Rincon relieved and gave up a two-run single to Soriano and walks to Jeter and Giambi.

Gardenhire made a couple of lineup changes, hoping to jump-start a stagnant offense. It didn't do much to help. Leadoff man Shannon Stewart (.400) and Torii Hunter (.429), who was moved to the cleanup spot, were the only ones who hit the ball much in the series.

In six regular-season starts with the Yankees against Minnesota, Wells is 6-0 with a 0.68 ERA -- including a perfect game. That's four earned runs in 52 2/3 innings, meaning he was merely four outs from throwing complete games in all of them.

Mike Mussina, Andy Pettitte, Roger Clemens and Wells made for a tough rotation. The Twins batted .198 for the series, just .091 (2-for-22) with runners in scoring position.

"We got ourselves out more than they got us out," Corey Koskie said. "I'm disappointed in my postseason. I'm sure a lot of other guys are, too."

Wells gave up two-out singles to Doug Mientkiewicz and Hunter in the eighth and was replaced by Gabe White. Wells gave up eight hits and struck out five without allowing a walk.

LaTroy Hawkins threw Rivera's bunt away for his second throwing error of the series in the eighth, allowing Aaron Boone to score and make it 7-1. Jeter hit a solo homer off Eddie Guardado in the ninth.

"No one said it was going to be easy going up against those guys," Guardado said."

Game notes
Stewart -- eligible for free agency after the season -- saved the Twins from further damage with two outs in the sixth, stealing a two-run homer from Jeter with a grab at the wall in left. ... Stewart also made a tremendous catch in the eighth, reaching out to take an extra-base hit from Johnson and throwing to second to double up Rivera. ... Minnesota's 88-year-old owner Carl Pohlad threw out the ceremonial first pitch with help from his sons. Pohlad arrived on a golf cart and tossed the ball about 40 feet from the plate. ... Cleveland (2001) and Cincinnati (1995) shared the previous division series record for doubles in an inning with three. ... Wells pitched a perfect game against the Twins on May 17, 1998. ... Lippy late-night talk show host Craig Kilborn, who grew up in Minnesota, led the seventh-inning stretch.