Only one thing was missing in his brilliant career, that rarest
of pitching feats.

Johnson became the oldest pitcher in major league history to
throw a perfect game, retiring all 27 hitters to lead the Arizona
Diamondbacks over the Atlanta Braves 2-0 Tuesday night.

"A game like this was pretty special," said Johnson, a
five-time Cy Young Award winner. "It doesn't come along very
often."

It was the 17th perfect game in major league history, the 15th
since the modern era began in 1900 and the first since the New York
Yankees' David Cone against Montreal on July 18, 1999.

"Everything he's done up to this point pales in comparison,"
Arizona manager Bob Brenly said.

Johnson struck out 13 and went to three balls on just one hitter
-- Johnny Estrada in the second inning. Estrada fouled off three
straight 3-2 pitches before going down swinging.

Late in the game, Johnson sat stoically in the dugout, staring
at the ground with his eyes closed, appearing to be almost asleep.

"It didn't faze me," the left-hander said. "Winning the game
was the biggest, most important thing." 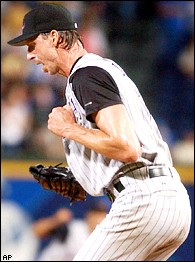 His manager was a lot more nervous. From the sixth inning on,
Brenly remained frozen in the same spot -- sitting on the bat rack,
tapping Matt Kata's bat with his knuckles while following one of
baseball's oldest superstitions.

"This is one of those nights where a superior athlete was on
top of his game," Brenly said. "There was a tremendous rhythm out
there. His focus, his concentration, his stuff, everything was as
good as it could possibly be."

Johnson sure didn't act his age, getting stronger as the game
went along on a pleasantly warm night in Atlanta.

"Not bad for being 40 years old," he said. "Everything was
locked in."

While it was the first perfect game of Johnson's career, it was
his second no-hitter. He no-hit Detroit for Seattle on June 2,
1990, walking six.

"That was far from perfect," he recalled. "I was a very young
pitcher who didn't have any idea where the ball was going. I was
far from being a polished pitcher. Fourteen years later, I've come
a long way as far as knowing what I want to do."

It was the longest span between a pair of no-hitters by a
pitcher in baseball history.

Former teammate Curt Schilling, who teamed with Johnson to lead
the Diamondbacks to the World Series championship in 2001, watched
the final two innings on a television at Tropicana Field in St.
Petersburg, Fla.

Schilling now plays for the Boston Red Sox, who had a game
against the Tampa Bay Devil Rays.

"Guys that play the game at that level ... do things other
people don't dream of doing," Schilling said. "They push
themselves. That's what he's done."

Johnson is back on his game after enduring an injury plagued,
6-8 season in 2003.

"He's been pitching great," Schilling said. "I just want to
find all those people that were talking about the end of his career
last winter."

Johnson pumped his fist and raised his glove in the air, but his
teammates seemed even more excited. He started to put out his right
hand when Robby Hammock arrived at the mound, but the young catcher
-- a foot shorter than Johnson -- gave the pitcher a bear hug
instead.

Within seconds, Johnson was mobbed by the rest of his teammates.

"He could smell it at the end," Estrada said.

The crowd of 23,381 at Turner Field gave Johnson a standing
ovation as he walked slowly toward the dugout. He waved in several
directions before disappearing down the tunnel.

He became only the fifth pitcher to throw no-hitters in both the
National and American leagues, joining Young, Jim Bunning, Hideo
Nomo and Nolan Ryan.

The crowd sensed history in the making when J.D. Drew grounded
out to end the eighth. The Atlanta fans gave Johnson (4-4) a
standing ovation as he trudged off the mound, then another when he
batted in the ninth.

While the Braves hit several balls hard off Johnson, the closest
thing to a hit was a slow roller by Johnson's Atlanta counterpart,
Mike Hampton, in the sixth. Alex Cintron scooped up the ball and
threw out Hampton by a half-step.

Johnson lingered near the third-base line, giving Cintron a pat
with the glove as he ran off the field.

Cintron also was the offensive hero, driving in Arizona's first
run and scoring the other.

There were few other close calls against Johnson. Atlanta's
first hitter, Jesse Garcia, led off with a bunt toward first and
tried to reach with a headfirst slide, but Shea Hillenbrand managed
to make the tag. In the fifth, Drew hit a liner toward the
right-field corner, only to have Danny Bautista make a basket
catch.

"This was a legitimate perfect game, any way you slice it,"
Estrada said.

Johnson threw the first no-hitter in Seattle history and now
he's pulled off the same feat for a different team. This was the
first no-hitter for Arizona, which joined the major leagues in
1998.

The Braves, who started a makeshift infield because of injuries
to Marcus Giles and Rafael Furcal, were no-hit for the first time
in 25 years. Ken Forsch of Houston did it on April 7, 1979.

"It was a situation where a dominant pitcher caught a
struggling team," Atlanta's Chipper Jones said.

Johnson's fastball reached the upper 90s in the late innings.
Andruw Jones lost his bat trying to catch up with a heater in the
eighth.

Johnson dominated the Braves with two pitches, augmenting his
fastball with a devastating slider. He didn't bother much with his
split-finger fastball.

The Diamondbacks snapped a five-game losing streak in which they
scored only eight runs. Johnson took one of those losses, losing
1-0 to the New York Mets.

In fact, Arizona had scored only one run total in Johnson's
previous two starts. They weren't much better this time, but it
didn't matter.

Hampton (0-5) pitched his best game of the season, allowing
eight hits. It didn't matter -- he's off to the worst start of his
career.

Arizona went ahead 1-0 after Hampton retired the first two
hitters in the second. Danny Bautista singled to right and came all
the way around to score on Cintron's double to the gap in
left-center.

The Diamondbacks added another run in the seventh, this time set
up Cintron's double down the left-field line. With two outs, Chad
Tracy lined an RBI single up the middle.

Notes: Sixteen perfect games have occurred during the regular
season. Don Larsen of the Yankees pitched his in the 1956 World
Series. ... Hampton has lost five straight decisions for only the
second time in his career. He also lost five in a row at the end of
the 2001 and the beginning of 2002.