PHOENIX (AP) -- With their closer in Miami to be with his wife
during the delivery of their first child, the Tampa Bay Devil Rays
found another way to cope.

Victor Zambrano, who will start Wednesday in Toronto, worked an
inning in relief, Trever Miller got one out and Jesus Colome faced
four batters and got five outs to seal the Devil Rays' 2-1 win over
the Arizona Diamondbacks on Sunday -- their 11th straight victory. 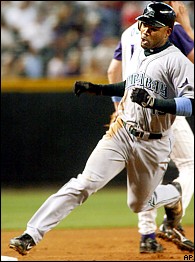 "We have a nice defensive ballclub," manager Lou Piniella
said. "(Danys) Baez, his wife is having a baby. We couldn't use
him. We put Zambrano in the bullpen to see if we needed him, and we
did."

The Devil Rays had scored 65 runs in 10 games to tie San
Francisco for the best winning streak in the majors. This time,
they made do with limited offense.

Robert Fick, a late addition to the lineup, tripled in the
eventual winning run, and Rocco Baldelli had a sacrifice fly. The
rest was pitching and defense.

"Nobody saw this coming," said Carl Crawford, who scored both
runs. "We knew we could win, but 11 in a row, I think, kind of
surprised everybody. We're playing team baseball right now."

With the win, Piniella moved past Miller Huggins for 20th
all-time with 1,414 victories. Piniella's teams have five streaks
of 10 wins or more. His 2001 Seattle team won 15 straight on the
way to an American League-record 116 victories.

Fick was playing for Jose Cruz Jr., who was hit by a pitch
Saturday and was scratched from the lineup with a bruise on the
back of his left leg. Fick's triple came in the third and put Tampa
Bay up 2-0.

The Devil Rays improved to major league-best 11-1 in interleague
play.

Mark Hendrickson (5-5), who is 3-0 in four starts in June, had
worked into the eighth inning in two previous outings, but weakened
earlier this time and lasted six.

The Diamondbacks loaded the bases on three singles with no outs
in the fifth, but got only one run -- Shea Hillenbrand scored from
third when Juan Brito hit into a double play.

Hendrickson, who threw 26 pitches in the fifth after using only
46 in the first four innings, pitched a perfect sixth and was
allowed to bat second in the Tampa Bay seventh. But Arizona starter
Brandon Webb walked him, and Hendrickson cooled off as Fick singled
and Webb walked Baldelli to load the bases.

Hendrickson said he had nosebleeds before the game because of
the dry air and felt his calf tighten on a pitch to Brito in the
fifth.

"I had plenty of liquids in me, but I think (Piniella) just
wanted to take me out for a caution," said Hendrickson, who
finished with one run on five hits and a walk.

Zambrano replaced him to start the seventh.

Miller came in for the eighth and allowed a double by Chad Tracy
and a single by Scott Hairston before striking out Steve Finley.

Colome relieved and got Danny Bautista to ground into an
inning-ending double play, then pitched a perfect ninth for his
second save in as many chances.

"That was really clutch pitching there at the end by Colome,"
Piniella said. "I tell you what, he's done a heck of a job for us
since we called him up from Durham, and we've leaned on him."

Bob Brenly, his Arizona counterpart, said the last of Tampa
Bay's three double plays was the most costly.

Baldelli had his sacrifice fly in the first after Crawford
singled, stole second and advanced on a groundout.

In the third, Crawford doubled and scored on Fick's triple.