SAN FRANCISCO (AP) -- Greg Maddux has always been a man of little
fanfare, so that's exactly how he handled his 300th win -- with a
quiet step into history.

Maddux never returned to the field after the final out was made.
Fans hollered as he worked his way down the hallway to a postgame
interview, and Maddux practically pursed his lips to keep from
reacting. It took a near mugging by a bunch of teammates at his
locker to finally make him smile. 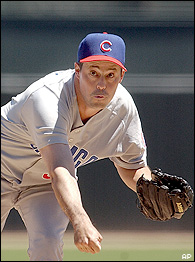 "It's pretty special," he said. "I like to look ahead. I've
never really looked back. When I'm done playing I'll look back. I'm
sure I'll pat myself on the back then."

Maddux relied on guts, guile and his bullpen to win his 300th
game because he never quite found the pinpoint control that has so
defined his stellar career.

"Obviously, to win 300 games, you've got to have a lot of help.
I've played on a lot of good teams, and a lot of times, you're only
as good as the guys behind you. Today was a good example," Maddux
said.

He is the first National Leaguer to accomplish the feat since
Philadelphia's Steve Carlton in 1983. Roger Clemens was the last to
do it on his fourth attempt for the New York Yankees on June 13
last season.

Maddux needed just two tries -- he got a no-decision in his first
chance last Sunday against the Phillies.

In the clubhouse, Sammy Sosa and several others surrounded
Maddux for a celebratory shower of champagne and beer. Once he was
soaked, Maddux enjoyed his first visible celebration with a long
swig of champagne.

"Here you go, Hall of Famer!" one player said.

Maddux left in the sixth with a 6-3 lead, no outs and two
runners on, bumping fists with manager Dusty Baker. But Maddux
didn't acknowledge the cheering, sellout crowd as he headed into
the dugout and then on to the clubhouse to wait out his fate after
throwing 82 pitches.

The Cubs' relievers came through.

Jon Leicester and Kent Mercker escaped the jam with Chicago
ahead 6-4. Mercker retired Ray Durham on a popup to end the sixth
inning.

Kyle Farnsworth got Dustan Mohr to ground out with the bases
loaded in the eighth, and LaTroy Hawkins secured the win with a
scoreless ninth.

After the final out, Cubs fans held up a large "W" banner, and
a graphic recognizing Maddux's achievement was shown on the
center-field scoreboard. But Maddux never came back onto the field.
He didn't feel it would be right to hold a huge celebration in
somebody else's ballpark -- a sign of the humility that his
teammates and coaches have come to expect.

"It was fitting. Greg meant what he says. He's a sincere man,"
Baker said. "He pitched well enough to win. You don't win 300
games with your best stuff all the time."

The 38-year-old right-hander certainly wanted to get this major
milestone over with, and so did the rest of the Cubs -- who knew
their star pitcher cared more about bringing the focus back to
their playoff chase.

Chicago's potent lineup rallied from a three-run deficit to help
Maddux (11-7) win his fourth straight decision and improve his
career record to 300-170.

"It's more of a sense of relief more than anything," Maddux
said. "Hopefully, we can move on. I don't think anybody got too
caught up in it to begin with. We can put it behind us and do what
we can to get to postseason."

He allowed four runs and seven hits in five-plus innings,
striking out three and walking three. Maddux is the second Cubs
pitcher to reach 300 wins after Grover Cleveland Alexander did it
in 1924.

"I didn't really pitch all that good today," said Maddux, who
was quickly joined by his wife and kids. "It was a total team
effort. It was great to see."

Everybody thought it would be easier for Maddux once the Giants
moved ace Jason Schmidt up a day to pitch Friday, then called up
rookie right-hander Brad Hennessey to make his major league debut.

But that wasn't the case through the early innings, when Maddux
labored and never looked comfortable on the mound, and Hennessey
(0-1) got two early strikeouts against Sosa.

"He pitched like he always does," San Francisco's J.T. Snow
said. "We were a hit away from a big inning, but he made the
pitches when he had to. Any time you face him, you're in for a
tough game."

Todd Walker had a two-run double in the fourth, and Chicago tied
the game at 3 on Aramis Ramirez's RBI single in the fifth. Derrek
Lee followed with a go-ahead double off the wall in right-center to
chase Hennessey, who received a standing ovation as he left.

In the next inning, Corey Patterson hit a two-run homer to give
the Cubs a 6-3 lead. Moises Alou added a two-run shot in the
eighth.

Hennessey, who was 6 years old when Maddux made his major league
debut in September 1986, allowed four earned runs and seven hits in
4 2-3 innings.

It was the first time a pitcher reached 300 wins against a
pitcher making his major league debut since John McPherson lost to
Cy Young in 1901.

It wasn't easy. Maddux, who has won four NL Cy Young Awards,
needed 29 pitches to get out of the first. Barry Bonds drove in a
run with a sacrifice fly, his 18th career RBI against Maddux.

Maddux was picked by the Cubs in the second round of the 1984
amateur draft, then signed with the Braves as a free agent in 1992.
He has a major league-record 16 straight seasons with 15 or more
wins -- the last 11 with Atlanta.

He rejoined the Cubs as a free agent in February.

"That's the most amazing thing about him. If you saw him going
about his business, you'd think he was just another guy trying to
stay in the big leagues," said teammate Mike Remlinger, who's
played five years with Maddux in Atlanta and Chicago. "He's there
every day, doing all the little things you need to do to be
successful. It makes you strive to have the same approach."

Game notes
Durham's triple was his 1,500th hit. ... Alou hit his third
homer this year and the 10th of his career against his dad, Giants
manager Felipe Alou.