CHICAGO (AP) -- Ramon Hernandez helped the San Diego Padres get
off to a good start on a key road trip. 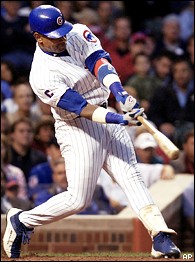 Hernandez had three hits, including a three-run homer, as San
Diego made the most of Mark Prior's wild streak and overcame five
solo homers to beat the Chicago Cubs 8-6 Tuesday night.

San Diego moved within one game of the Cubs for the lead in the
NL wild-card race, loading the bases three times and driving out
Prior in the fourth inning.

"For some reason Prior wasn't throwing as hard as he always
threw," said Hernandez, who had two singles off Prior and a homer
off Glendon Rusch.

"When I faced Prior the first time in my life he was throwing
96, 97. Today he was throwing 91-94 and he was a little wild and
out of the zone. He was hurt for a long time. It might take a
little bit of time for him to be the Prior that everybody has
seen."

Adam Eaton (7-10) gave up four solo homers in five-plus innings
but got the victory for the Padres, who were coming off a
disappointing homestand in which they lost six of their final seven
games.

Eaton, who helped his own cause with a tiebreaking two-run
single in the third, surrendered solo homers to Sammy Sosa, Moises
Alou, Derrek Lee and Nomar Garciaparra -- his first since the Cubs
acquired him from the Red Sox on July 31.

Lee homered for the second time in the ninth off Trevor Hoffman,
who got final three outs for his 30th save in 33 chances. With two
on and two outs, Ramon Martinez flied out.

Sosa hit his 564th homer to move past Reggie Jackson into sole
possession of eighth place on the career list. In an 0-for-15
slump, Sosa connected for a solo shot in the second inning, his
25th homer of the season. Alou followed on the very next pitch with
his 27th for a 2-0 lead.

But Prior (3-3) struggled with his control and his pitch count
sailed to 83 after just three innings -- 37 alone in the third. He
allowed six runs, eight hits, five walks, a hit batter and a balk.

"I've had my fair share of games where I've struggled with
control more than I have in years past," Prior said. "But I
really don't have one specific answer why my control is not as good
as I'd like it to be."

Making his 12th start of the season, Prior missed all of spring
training and the first two months with a sore elbow and Achilles'
tendon.

"When you don't get spring training, it's tough to get your
feet under you during the season because everyone is ahead of
you," Lee said. "I think he's still battling back from the injury
in spring training. He'll be all right."

After Mark Loretta singled and Brian Giles walked to start the
third, Prior started a double play on Phil Nevin's comebacker, with
Garciaparra making a nice pivot at second. But Prior walked Ryan
Klesko, and Terrence Long and Hernandez followed with RBI singles.

After a walk to Khalil Greene loaded the bases for a second
straight inning, Eaton's two-run single put San Diego ahead 4-2.

"We needed a hit from Adam. That was huge there," Padres
manager Bruce Bochy said.

"Hitting is a bonus obviously," Eaton added. "He didn't want
to walk me with the bases loaded,and I put a good swing on it."

Loretta singled in the fourth, Giles doubled and Prior hit
Nevin, loading the bases for a third straight inning. Klesko hit a
bouncer to second off Rusch but no one covered first and the RBI
single made it 5-2.

After a double play, Hernandez drove his three-run homer to
right, his 10th of the season.

The Cubs got an unearned run in the sixth and drove out Eaton
when Garciaparra walked, Sosa reached on Sean Burroughs' error at
third and Todd Walker hit an RBI single.

"I don't know the last time we won a game and gave up five
homers. Thank goodness they were solo jobs," Bochy said.

Game notes
Harmon Killebrew is seventh on the career home run list
with 573. ... Eaton has given up a team-high 22 homers. The four
surrendered Tuesday night were a career high. ... Lee has nine
career two-homer games.