LOS ANGELES (AP) -- Without Hakeem Olajuwon the entire game and
Vince Carter for the fourth quarter, the Toronto Raptors were still
better than the Los Angeles Lakers without Shaquille O'Neal. 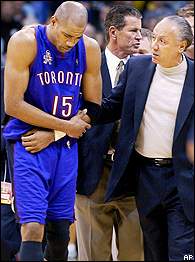 The Raptors, who lost Carter to a strained left shoulder in the
final second of the third quarter, held on to beat Kobe Bryant and
the Lakers 89-86 Friday night.

Carter hurt his shoulder when he went down hard while driving to
the basket. Devean George fouled him, but Carter, knocked slightly
off-balance, was past George when he fell to the floor. X-rays on
the shoulder were negative and Carter is listed as day-to-day. The
Raptors play in Seattle on Saturday night.

"It's not broken; that's all I can really tell you. I'm pretty
sore. I don't know how long I'll be out, but we'll find out
tomorrow," said Carter, who is scheduled to be re-examined on
Saturday.

He was frustrated at missing the fourth quarter, but proud of
his teammates.

"It stinks to sit there on a table (in the X-ray room) and have
to watch it when you want to help. But that just shows how far
we've come as a team. We really stepped up and pulled together and
pulled out a big one against the best team in the league," Carter
said.

Olajuwon was out again with an infected toe, while his Lakers
counterpart, O'Neal, is on the disabled list with an arthritic toe.

Alvin Williams had 17 points and 11 rebounds to lead three
Raptors with double-doubles. Antonio Davis had 16 points and 10
rebounds, and Keon Clark added 14 points and 16 rebounds.

Bryant led Los Angeles with 26 points and George had a
career-high 17 as the Lakers lost the fifth of their last nine
after a 16-1 start.

"We're not panicking, but we hate to lose, especially in this
fashion," Bryant said. "It just eats away at you. We've very,
very upset at this loss."

Said Lakers coach Phil Jackson: "My concern is that we came out
in the third quarter and did not play with the intensity that we
left the game at halftime, and came back and played with again in
the fourth quarter.

"We need to play with more excitement and more energy."

The Raptors never trailed and led by as many as 16 in the third
quarter, but the Lakers pulled within one point twice in the fourth
and took it down to the wire before Brian Shaw missed the first of
two free throws with 2.8 seconds left, then intentionally missed
the second and Toronto got the rebound.

Carter had 15 points when he left and the Raptors held a 66-62
lead. Since he couldn't shoot free throws, the Lakers got to
designate who would shoot them for the foul against him. They
picked center Eric Montross, a 49-percent shooter, and he made one
of the two free throws.

O'Neal sat out his third game after going on the injured list
last Tuesday. Olajuwon missed his fifth game because of the
infected toe on his left foot. He is being treated with
antibiotics.

Even Bryant has been slowed recently by soreness in his right
rib cage, but said after the game that he felt OK.

Down by 56-40 early into the third quarter, the Lakers rallied
to cut the deficit to 67-62 heading into the fourth.

Rick Fox had eight points, five rebounds and two assists to lead
the Lakers' surge in the period.

Davis scored 10 points in the second quarter as the Raptors
opened a 44-37 lead by halftime. Bryant was basically a one-man
show for the Lakers in the first half with 13 points.

Toronto led 22-19 at the end of the opening quarter.

Game notes
Carter, in his fourth year, has missed just seven games in
his career, all last season because of an injured left knee. ..
Jackson said he would probably limit O'Neal's practice time but not
the center's playing time when he comes off the injured list. ...
The Nebraska Cornhuskers' fourth-ranked football team, which plays
No. 1 Miami in the Rose Bowl for the BCS championship on Thursday,
was among the sellout crowd of 18,997. Miami's players will be at
the Lakers' game Sunday against Houston.