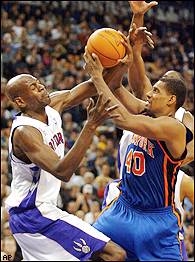 Sprewell had 35 points, including 15 in the fourth quarter, as
the Knicks ended their eight-game losing streak with a 96-92
victory over the Toronto Raptors on Wednesday night.

Sprewell, who went scoreless in 43-point loss Monday against Charlotte, held Vince Carter to 18 points on 6-for-23 shooting.
Sprewell, who played the entire game, went 13-for-25 from the field
as the Knicks ended their longest losing streak in 15 years.

"We can't dwell on the past," Sprewell said. "I just hope we
learn from it."

"It was a tough stretch for us, so hopefully we can learn from
the way we played tonight," Sprewell said. "I wasn't happy. I was
really disappointed with the way that we lost as a team. I just
didn't want any letdowns like that again."

Alvin Williams had 23 points and Antonio Davis added 21 for the
Raptors, who have lost two consecutive after winning four in a row.

Before the game, Knicks president Scott Layden refused to
address speculation that Chaney could be in danger of losing his
job. The Knicks are only 5-16 since Chaney replaced Jeff Van Gundy.

"They really stepped it up," Chaney said. "They played
aggressive and they fought."

The Knicks began the second half with an 11-2 run as Kurt Thomas
made a short jumper, Sprewell had a layup and jumper and Allan
Houston made a wide-open 3-pointer, giving New York a 14-point
lead.

"We knew we weren't doing our job well," Houston said. "It
was time for us to step up."

Williams narrowed New York's lead to four with three consecutive 3-pointers late in the third quarter. Sprewell countered with a
3-pointer and a running layup, giving New York a 10-point lead
early in the fourth.

Williams narrowed it to six with a jumper with 4:29 left, but
Sprewell made two free throws.

Williams made another jumper and Carter a made floating jumper
with 2:05 left to narrow the lead to four.

"We needed a basket," said Sprewell, who pumped his fist after
making the shot. "Once it went down I felt it was important to
make the free throw to put pressure on them."

Davis followed with a jumper, but Toronto's Keon Clark couldn't
grab a pass, committing a turnover with less than a minute left.

Marcus Camby made one of two free throws with 10.5 seconds left
to seal the victory.

"If we don't get a win tomorrow it won't matter," Camby said.

Davis noticed a difference in the Knicks.

"Their intensity was a huge factor," Davis said.

Carter said he had a tough time playing against Sprewell.

"If I didn't score in the game before I would make the
extra effort also," Carter said.

Sprewell had 14 points, and Thomas and Mark Jackson each had
nine as the Knicks let 51-46 at halftime. The Knicks went on a 12-2
early in the second quarter to take a 12-point lead, but Davis had
nine points in the period to help narrow the lead to five.

Game notes
The Knicks suffered the worst home defeat in the franchise's
56-year history with the 111-68 rout Monday by Charlotte. ...
Sprewell went 0-for-9 in the defeat Monday. .... Houston played just
six minutes in the first half after picking up two fouls early in
the first quarter. ... Toronto's Hakeem Olajuwon had just two
points in 15 minutes.