EAST RUTHERFORD, N.J. (AP) -- This one game won't mean much one
month from now, unless the New Jersey Nets think back and remember
the moment when their resolve was put to the test. 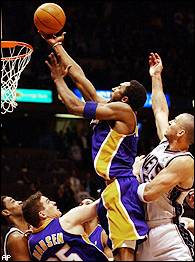 After blowing an early 19-point lead and falling behind by eight
in the fourth quarter, New Jersey scored 16 of the game's final 22
points to defeat the Los Angeles Lakers 94-92 Wednesday night.

"We looked like we were dead in the water," Nets coach Byron
Scott said. "The last four minutes these guys conjured up some
energy and started playing the way we did the first half. To get
that win is obviously a big confidence boost for our team."

The Lakers played without Shaquille O'Neal, a last-minute
scratch because of a sprained right wrist. Kobe Bryant scored 33
points and almost tied the game just before the final buzzer,
bursting in from the 3-point line but missing a tip-in of a missed
free throw by Rick Fox.

The Nets extended the longest home winning streak in franchise
history to 12 games, leaving the Lakers 2½ games behind Sacramento
for first place in the Pacific Division. It was New Jersey's first
home win over the Lakers since 1994.

"We never lost our composure, stayed together down the stretch
and fought," Kidd said. "We didn't get out and run as much as we
wanted to. In the first half we did, in the second half it was
slowed down. We have to understand that's what it's going to take
come the end of April.

"We have to play that style, and the big thing is to play
defense. That's what we did in the fourth quarter."

Getting a taste of playoff-like intensity and playing before a
rare sellout crowd, the Nets allowed the Lakers to take control
with an 18-2 run early in the fourth.

But rather than surrender, they showed some of the fortitude
that Lakers coach Phil Jackson questioned whether they possessed.

"Usually it takes the heat of the playoffs to temper a team in
a way that they are tested and tried, and then they have some
resolve and are capable of winning," Jackson said before the game.

After Bryant hit a bank shot for an 86-78 lead with 6:45 left,
Martin hit a jumper, MacCulloch converted a three-point play,
Kittles scored on a dunk and Jefferson hit a wide open jumper in a
9-0 run that gave the Nets an 87-86 lead.

Jefferson hit a corner jumper as the shot clock expired with
1:44 left, giving the Nets a 91-88 lead. Bryant, defended by Kidd,
then dribbled the ball out of bounds off his foot. After Martin
missed a jumper, he blocked a 3-point attempt by Derek Fisher with
55 seconds left.

Kittles made one of two from the line for a 92-88 lead with 39
seconds left before Robert Horry made a 3-pointer with 29 seconds
remaining. The Nets then ran down the 24-second clock, and Kidd
bounced in a leaner from 12 feet away for a 94-91 lead.

Fox drew Martin's sixth foul on a layup attempt with 2.5 seconds
left, made the first free throw and missed the second. Kidd failed
to box out Bryant on the perimeter, allowing him to grab the
rebound and nearly tie the game.

The Nets were hot early, making their first five shots for a
10-2 lead and then getting seven consecutive points from Kittles --
back-to-back dunks and a 3-pointer off a steal by Martin on an
inbounds play.

The dunkfest continued in the second quarter, with the Nets
getting five more after throwing down six in the first quarter.
Jefferson slammed in a rebound, and Aaron Williams dunked off
another stolen inbounds pass to make it 39-23. The lead eventually
reached 19 before the Nets settled for a 55-40 halftime edge.

Bryant started taking over in the third quarter and the Lakers
began chipping away at the lead. Bryant hit five jumpers ranging
from 8 to 15 feet while scoring 11 of his team's final 15 points of
the quarter.

After the Nets botched a fast break early in the fourth, Bryant
spun through traffic for a three-point play. Devean George then hit
a 3-pointer with 9:58 remaining to give the Lakers their first tie
since the opening tip, 76-76.

Game notes
New Jersey drew its sixth sellout crowd of the season, with
many of the fans cheering loudly for the Lakers. New Jersey
improved to 31-6 at home, setting a franchise record for home wins.
... Kidd shot 5-for-7 from the field. The Nets are 20-1 when he
makes more than half his shots. ... Lakers assistant coach Kurt
Rambis banged his knee on a folding chair before the game and had
to be taken to a hospital for six stitches. ... Former New York
Knicks coach Jeff Van Gundy was part of the TNT broadcasting team.
He declined to be interviewed by The Associated Press.