DALLAS (AP) -- While the Los Angeles Clippers are no longer the punching bag they once were, they played the role of sparring partner to perfection Thursday night against the Dallas Mavericks. 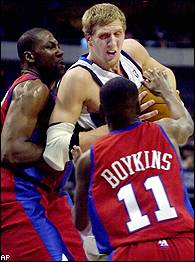 The Clippers stunned the Mavs with a nice start, but Dirk Nowitzki scored 25 points and Dallas recovered easily to beat Los Angeles 115-90 in its final game before a Midwest Division showdown against San Antonio.

The Mavericks, who have won six of seven, lead the Spurs by 1½ games. They play Saturday at the Alamodome.

"We weren't ready at the beginning of the game, we looked a
little rusty," said Nowitzki, who sat out the final minutes with
ice on his sore shooting elbow. "But in the second half, we played
some defense, started running and made some shots."

Dallas trailed by 10 in the opening minutes and by 11 late in the first quarter. The Mavericks went ahead for the first time in the closing seconds of the first half on a scooping layup by Steve Nash, then led for all but 13 seconds the rest of the way.

The Mavericks couldn't have had a better tuneup for the Spurs.
Their scoring went up every quarter, from 21 to 23, then to 34 and
37. The 71 points in the second half were a season high.

More impressive is that they did it without a huge emphasis on
their Big Three.

Nowitzki's points came on an efficient 9-of-14, including 2-of-3
on 3-pointers, and 5-of-5 free throws. Nash had seven assists and a
below-average 11 points, yet took just eight shots, and Finley was
cold most of the game.

Instead, coach Don Nelson used various lineup combinations and
let players audition for playoff minutes. All 12 players played and
everyone produced. Shawn Bradley was the only one who didn't score,
but he caused five turnovers in four first-half minutes.

Nick Van Exel got his second start and had 12 points, including
five key ones during the late spurt. Greg Buckner played 32 minutes
off the bench and shot 6-of-7 for 13 points. Evan Eschmeyer played
15 minutes and had 10 rebounds and four points.

"We played with intensity for all but six or seven minutes,"
Nelson said.

Los Angeles center Michael Olowokandi came off the bench for the first time in two seasons as punishment for a "team violation," coach Alvin Gentry said. Olowokandi indicated he missed a meeting.

"I'm sorry I violated team policy, but I thought it was more
important for me to get some rest," he said. "We were
back-to-back and we got in at 2 in the morning."

Olowokandi also was critical of management following a loss in Utah the previous night, saying that players were looking out for their own interests while distracted by their contract status.

Olowokandi still had a team-high 19 points and eight rebounds -- but offset it with seven turnovers. Jeff McInnis scored 17, Corey
Maggette had 16 and Elton Brand had 13 points and nine rebounds.

The highlight for Los Angeles was probably seeing 5-foot-5 Earl Boykins flip in a layup over 7-foot-6 Bradley in the closing minutes.

The Clippers, who've given up hope at the eighth playoff spot, lost their third straight and fell two games under .500.

"We still have a shot at a winning record," Brand said. "Since the playoffs are out of reach, that is one of our goals now."

Los Angeles began to claw back at the start of the fourth
quarter, but the Mavericks doused the threat with a combination of
layups and 3-pointers against a listless defense. Gentry let his
frustration boil over, drawing a technical for arguing a foul call.

"We had some points where we played some good basketball, so it
shows the potential of this team," Gentry said.

One night after scoring only nine points in the first quarter
against Utah, the Clippers took a quick 12-2 lead and finished the
period ahead 27-21. The Mavericks tied the game early in the
second, with Nowitzki driving around Darius Miles for a powerful dunk and then tossing in a 12-footer over Miles before Nash's layup.

Game notes
Dallas won its 52nd game, one shy of last year's total with eight to go. ... This was the first time in four games this season that both teams failed to score 100 points. ... Some 2,500 fans
went home with Eduardo Najera bobbleheads. ....With NASCAR racing
in the area this weekend, drivers Dale Jarrett and Elliott Sadler
shot free throws as part of a timeout promotion. They tied.