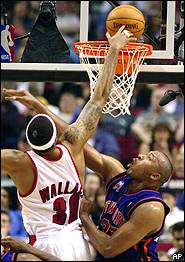 Rasheed Wallace scored 25 points and Dale Davis had a season-high 18 rebounds as the Blazers officially eliminated the
New York Knicks from playoff contention with a 88-80 victory Thursday night.

Portland shot just 4-of-20 in the fourth quarter, continuing a recent trend, but the Blazers had a 15-point cushion entering the period and New York couldn't muster enough offense to overcome the deficit.

"For what it was worth, it's a W," Davis said. "And we know there's things we have to improve on before we can consider ourselves a contender and really make a run at this thing. We have seven games to tune up and polish up on what we need to do."

Portland, which moved within a game of fifth-place Minnesota in
the Western Conference, had lost three in a row and four of five.
In those four losses, the Blazers shot just 20 percent in the
fourth quarter and were outscored 110-58.

"I'm really hoping that this is our slump in terms of shooting
the basketball, and at some point it will turn around," Cheeks
said. "And we will make shots. I have no doubt in my mind that the
shots we get, we'll make them at some point."

"No sense in crying over spilt milk," said Latrell Sprewell, who was ejected in the third quarter after shoving Portland's Bonzi Wells. "We let a lot of games slip away, and now we're paying for it."

Sprewell was tossed with 3:44 left in the third quarter for giving Wells a forearm. The two had exchanged words after getting tangled up in the second quarter and were each given technical fouls.

"Bonzi was being a little too physical, and I responded," Sprewell said. "If he had hit me in the face or something, it wouldn't have been a pretty sight out there. He was definitely swinging the elbows."

Allan Houston, who had missed the previous five games with a
sprained left ankle, started but was ineffective. He was just
4-of-14 from the field and scored eight points.

"I just didn't have my spring or lift," Houston said. "It
definitely hindered me."

Wallace has had two consecutive strong games after sitting out
three of four with a bad back.

"I hope he's a hundred percent," teammate Scottie Pippen said.
"We're not going to let him take another break. With him out there
on the court and being the focal point, it really makes things
easier for us."

Wells and Derek Anderson each added 16 points and Damon
Stoudamire had 12 for the Blazers, who put the game away in the
third quarter with an 18-7 run in a span of just 3:58.

The Knicks, who made eight of their first 11 shots in the period
after shooting 33 percent in the first half, were within 52-47
after an alley-oop pass from Jackson to Weatherspoon.

Wallace had six points, including a 3-pointer, during the run,
which ended when Pippen stole the ball and passed to Anderson for a
layup that made it 70-54.

The Knicks missed nine of their last 12 shots in the quarter.

Wallace, who had a four-inch advantage over Weatherspoon, made
five of his six shots in the opening period and scored 10 points in
eight minutes before leaving with two fouls.

Davis had 13 rebounds by halftime, and Stoudamire -- who missed his first four shots -- made two straight jumpers in the final minute to give the Blazers a 44-32 lead.

Game notes
Portland had lost three straight and four of five. ... The
Knicks won the first meeting 89-82 at Madison Square Garden, and
had won six of their previous nine over the Blazers.