EAST RUTHERFORD, N.J. (AP) -- In less than one year, the New
Jersey Nets have gone from one of the NBA's perennial doormats to a
division champion. 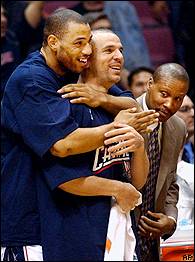 The Nets won their first division title since joining the NBA in 1976 by riding another showtime performance by Jason Kidd to a
101-88 win over the Washington Wizards on Tuesday night.

"This is very exciting," said general manage Rod Thorn, who has transformed a team that won 26 games a year ago into one of the best in the league. "It's a lot better feeling than at this time last year when we were not competitive. Going into every game, knowing we have a chance to win, is a big step for us."

And the Atlantic Division title isn't all the Nets can capture.

The Nets' 50th victory -- the most they have won in an NBA season
-- also cut their magic number for winning the regular-season
Eastern Conference crown to three.

Any combination of either three Nets wins in their final four
games or Detroit losses in its last five would clinch the
conference's No. 1 seed in the playoffs.

Even though Kenyon Martin jumped on a courtside table and modeled his new T-shirt proclaiming the Nets divisional championship, most of the players weren't celebrating much.

"The big thing is the season isn't over because we won our division," said Kidd, who once again led the way with 21 points. "We have to go out and finish on the right note and realize there are more goals to attain before the playoffs start."

Still, the Nets' accomplishment is remarkable.

Just a year ago, New Jersey posted a 26-56 record in Byron
Scott's rookie season as coach, continuing a trend in which the
two-time former ABA champions finished near to the bottom of the
league.

In less than a year, everything has changed.

Kidd, considered the league's best point guard, was acquired in
a blockbuster deal with Phoenix for fellow All-Star Stephon
Marbury. Guard Kerry Kittles returned after missing a year with a
knee injury. Center Todd MacCulloch was a free-agent find and the
team stayed healthy.

On the floor, the Nets' run-and-gun style not only has been
entertaining, it's been one of the best shows in the league.

"Everything is made so much sweeter because we have come from
so far," said fourth-year forward Keith Van Horn. "It really
speaks to how far this organization has come."

"It was pretty low a year ago," veteran guard Lucious Harris
added. "But from last year to this is a total turnaround. We never
knew we would get to this point."

The Nets had too much for the Michael Jordan-less Wizards, who
lost for the fifth time in six games.

Kidd added 12 assists and eight rebounds on a night when he even dunked on a fastbreak. As usual, there were chants of "M-V-P" from the crowd.

Reserve Aaron Williams scored 19 points, and Martin had 13,
including a spectacular throw-down on a third-quarter ally-oop pass
from Kidd.

Tyronn Lue and Richard Hamilton had 14 points apiece to lead the
Wizards, who were held to 42.3 percent shooting from the field.

"This is a model team for us to look at," Wizards coach Doug
Collins said. "This is what we aspire to do, to take a franchise
that has been struggling and get this respectability."

New Jersey never trailed after Kidd had five points and three
assists in a 17-2 first quarter spurt that gave it a 21-9 lead.

Washington got within six points early in the second quarter,
but the Nets led by 12 at the half and they blew the game open with
a 20-8 run to start the second half.

Kidd set up three straight baskets in the run, dunked on a break
and then hit a long 3-pointer that started the "M-V-P" chant.

The franchise record for wins is 58, set in 1974-75 when the
team was a member of the ABA. New Jersey actually won at least 55
games in its final three seasons in the ABA, but the Nets' fortunes
went downhill at the time of the merger when the team sent Julius
Erving to Philadelphia to raise money.

Game notes
The Nets' previous record for wins in the NBA was 49 in
1982-83. ... New Jersey won the final three games in winning the
season series 3-1. ... The Nets have the league's second-best home
record at 33-7. ... Wizards F Christian Laettner returned to the
lineup after missing two games because of back spasms. ...
Washington is now 1-3 since Jordan ended his season because of a
knee injury. ... Nets outscored the Wizards 23-2 on the fastbreak
and finished the season series with a 99-4 edge in that category.
...The Nets are heading to the playoffs for the 11th time in the
NBA, their first since 1998.