SACRAMENTO, Calif. (AP) -- Mike Bibby clenched his fists and
screamed into the din once again. In his first game back from a
broken foot, the Sacramento Kings' playoff hero had done it again. 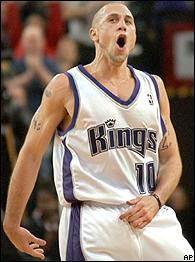 Or so he thought. This time, Bibby's celebration of a go-ahead
jumper was 6 minutes too early -- and the Kings soon went back to
playing with two left feet.

Stephen Jackson scored 18 points as the Spurs followed a victory
in Seattle by winning in the NBA's toughest road arena one night
later. The Spurs have struggled with inconsistency all season, but
they silenced the Arco Arena crowd in a game Bibby's teammates
desperately wanted to win for him.

"We're still trying to find our personality, but this was a
good start,'' Duncan said.

The Kings had won their first 13 games at Arco, where they're
80-14 over the past three seasons, but they gave one of their most
lifeless performances in years on the same night their
injury-plagued roster became nearly whole.

Sacramento shot less than 35 percent and never found a rhythm.
Sure, the Kings surged ahead on a 3-pointer by Bibby with 6:22
left, but they immediately gave up several baskets in a row and
never got back in it.

Bibby missed the Kings' first 27 games after breaking his foot
in the preseason, but he got a raucous standing ovation at the
first mention of his name. He hit a long jumper on Sacramento's
first possession and finished with 17 points on 7-of-12 shooting,
including two 3-pointers.

"I'm nervous before every game. It was just a little more than
usual this time,'' Bibby said. "I kept telling them, 'Don't lose
this one. Sometimes, it just doesn't work out. That's why we play
so many games. We just couldn't make shots.''

"It's kind of amazing that we lost by two,'' Adelman said. "It
just seemed like we were running in sand all night long.''

The Spurs were barely better, committing 18 turnovers, but
Duncan had another outstanding game. San Antonio hung on with
defense, allowing the Kings to make several turnovers and poor
shots in the closing minutes.

San Antonio didn't have a field goal in the final 3:36, but the
Kings repeatedly botched opportunities to get back in the game.
With 12 seconds left and Sacramento down 81-78, Bobby Jackson
inexplicably drove the lane and made a wild pass that was
intercepted by Stephen Jackson, who hit two free throws with 10.1
seconds left.

Bobby Jackson hit a 3-pointer at the buzzer.

"Any game against Sacramento is an important game, and if you
win it, it's huge for your confidence,'' San Antonio coach Gregg
Popovich said. "It makes you feel as if you're on the right
track.''

"We have a lot of new guys, and we're figuring things out,''
Robinson said. "When the Kings made a couple of 3s, it reminded me
of how loud this place is.''

After Duncan hit a leaner in the final second of the first half,
the Kings trailed 44-39 -- just their second halftime deficit at
Arco all season.

But the Kings hit three straight jump shots to take a 71-70 lead
midway through the fourth. When Bibby hit the go-ahead 3-pointer,
he re-enacted his celebration after hitting the game-winning jumper
in Game 5 of the Western Conference finals.

The Spurs scored seven straight points to go back ahead, but
Bobby Jackson's 3-pointer cut the lead to 79-77. The Kings had a
chance to tie it, but Duncan blocked Vlade Divac's layup attempt with 1:24 left, then hit two free throws.

"It was our fault that we let them control the pace,'' Webber
said. "Games like this make certain teams' seasons, or at least a
couple of months.''

Peja Stojakovic had another horrible game, shooting 2-of-10 for
5 points and playing mediocre defense for Sacramento. Stojakovic,
an All-Star last season, is shooting under 41 percent this season
while struggling with a nagging heel injury and an obvious lack of
confidence.

Game notes
Webber hit a 75-footer from the opposite foul line -- but it
came after the third-quarter buzzer. ... Bibby had missed just two
games in his first four NBA seasons. He never missed a game in
three seasons with Vancouver. ... Steve Kerr missed his second
straight game for San Antonio while attending to personal business.
He'll rejoin the Spurs at home against Washington on Saturday
night.