LOS ANGELES (AP) -- Kobe Bryant acknowledged it was the game of a lifetime. 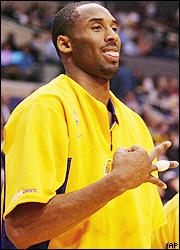 At least as an adult.

Bryant made an NBA-record 12 shots from 3-point range, including
nine straight, in scoring 45 points as the Los Angeles Lakers beat
the Seattle SuperSonics 119-98 on Tuesday night.

When asked if he had ever had a such a game, Bryant replied:
"Maybe one time when I was 7 years old, I got 63 points. I was
playing against kids who were 14, in Italy."

Bryant, who had never made more than five 3-pointers in an NBA
game, broke Dennis Scott's record of 11 with 6:58 to play.

The 24-year-old Bryant shot 12-of-18 from beyond the arc and
16-of-28 overall. He made 11 3-pointers in the second and third
quarters, when he scored all but seven of his points.

His nine straight 3-pointers is also an NBA single-game record.

"It's hard to describe," Bryant said of the feeling he had
once he got hot. "You just feel so confident. You get your feet
set and get a good look at the basket -- it's going in.

"Even the ones I missed I thought were going in."

Bryant, who played 37 minutes, said he wasn't aware the 3-point
record was 11 until being told by a ballboy during the game.

The four-time All-Star said he felt good beforehand, but nothing
out of the ordinary.

Bryant received a standing ovation from the sellout crowd of
18,997 at Staples Center when he left the game for good with 4:16
remaining and the Lakers leading 110-88.

"That was perhaps the greatest streak shooting I have ever seen
in my life," said Lakers coach Phil Jackson, who has coached nine
NBA championship teams -- six in Chicago and three with the Lakers.

Bryant didn't make his first 3-pointer until connecting with
5:28 left in the second quarter.

That opened the floodgates.

He added five more without a miss before halftime as the Lakers
outscored the Sonics 23-12 for a 60-45 lead.

Bryant opened the scoring in the third quarter with a
three-point play, and added three more 3-pointers to put the Lakers
ahead 76-58 with 7:17 left in the period.

At that stage, he had made 10 straight shots -- all but one from
3-point range.

Bryant finally misfired from beyond the arc two minutes later,
but scored off a pass from Shaquille O'Neal, who rebounded the
miss.

Bryant then hit back-to-back 3-pointers to tie Scott's record
and give the Lakers an 86-65 lead with 2½ minutes left in the third
period.

Bryant had made 26-of-92 3-pointers this season entering the
game and missed his first attempt before suddenly getting hot and
breaking the record Scott set for Orlando against Atlanta on April
18, 1996.

The previous franchise record was eight by Glen Rice once, and
Nick Van Exel three times.

"The shots he took were shots you would want guys to take -- 3
or 4 feet behind the 3-point line with a hand in his face," Sonics
coach Nate McMillan said. "He made five or six in a row ... nine
in a row? Well, there you go.

"I don't think most guys can do that in a gym by themselves,
let alone a game where you're being defended."

O'Neal added 20 points and a season-high seven assists for the
Lakers (15-20), who have won four of their last five.

Desmond Mason led the Sonics (16-17) with 19 points and nine
rebounds. Vladimir Radmanovic added 18 points and eight rebounds
for Seattle, which has lost six of its last eight.

Devean George made two 3-pointers early in the final period to
give the Lakers 16, surpassing their previous high of 15
established twice. They finished 17-of-32 from beyond the arc to
equal the third-highest team 3-point total ever in the NBA.

The Lakers made only 10-of-52 shots from 3-point range in their
previous three games including 2-of-21 in a 107-93 loss at Phoenix
last Saturday night.

Bryant scored 37 points in that game, but missed all eight
3-pointers he tried.

Game notes
Scott set his 3-point record on April 18, 1996 for the
Orlando Magic against Atlanta. ... Sonics guard Brent Barry, hampered
by tendinitis in his left knee, missed his second consecutive game. He
started 81 games last year and the first 31 this season before
sitting out the 94-82 defeat last Friday against visiting Denver,
snapping the Nuggets' 10-game losing streak. ... The Lakers have
won four of five games over Seattle since being swept by the Sonics
4-0 in the 2000-2001 season. ... The Sonics activated center Jerome
James, sidelined since Dec. 10 because of a stress fracture in his
right foot. To make room, they placed rookie forward Reggie Evans on the
injured list. Evans, who has a sprained right shoulder, has started
23 games. ... Lakers forward Samaki Walker sustained a slightly
hyper-extended left knee in the third quarter and didn't return.