HOUSTON (AP) -- Shaquille O'Neal is satisfied that his
self-proclaimed title is still intact. 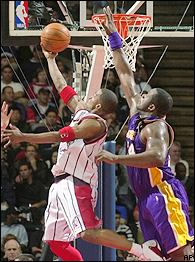 O'Neal scored 39 points and took over the game in the closing
minutes with three straight baskets as the Los Angeles Lakers
overcame the emotionally charged Houston Rockets 96-93 Wednesday
night.

O'Neal outplayed Houston's Yao Ming in their second meeting,
then denied it was a statement game.

"I don't have to make statements," O'Neal said. "Everybody
knows the type of player I am. I've been doing this for 10 years
and just because he had one good game against me doesn't mean he
had the MDE (most dominant ever) title.

"I took that title from Hakeem when he left Houston a couple of
years ago."

Despite the Yao-Shaq matchup, the pre-game talk was about
Rockets coach Rudy Tomjanovich, who told the team earlier in the
day he would take an indefinite leave of absence to fight bladder
cancer.

"I think we did a good job defensively, we just did not do the
job down the stretch," Rockets acting coach Larry Smith said.
"We're still learning. I lot happened this week. I'm not making
excuses but this was a very trying day for us."

Houston led 89-86 with 2:37 to play before a basket by Robert
Horry set the Lakers' winning rally in motion.

O'Neal followed with a 7-foot hook, a turnaround jumper, both
over Kelvin Cato, and then went right at Yao and dunked on his
third try for a 94-91 lead with 19 seconds remaining.

"He (O'Neal) gets pumped up on matchups like this," Kobe
Bryant said. "He looks forward to silencing those people. It took
him a minute to figure him out, but once he figured him out, he'll
dominate him like he does everyone else."

Bryant scored 31 points for the Lakers with a team-high nine
rebounds.

The biggest lead of the game was Houston's early 20-10 edge.
Then it got tight and stayed that way. There were 15 lead changes
and 11 ties. O'Neal made the difference.

"He (O'Neal) was motivated, no doubt about it," Los Angeles
coach Phil Jackson said. "He really didn't want to come out of the
game in the first half and in the second half I let him play
more."

The Lakers took a 41-38 lead into the third quarter and had to
fight to keep it. Los Angeles was leading 47-46 when Yao hit his
chin on Rick Fox's head and fell to the floor. He had to leave the
court briefly.

The Rockets edged ahead 55-52 in Yao's absence, but a basket by
Derek Fisher and three free throws by Bryant gave the lead back to
Los Angeles. The Lakers held a 66-64 advantage going into the final
period.

The first meeting between Yao and O'Neal was a big media event,
complete with Chinese protests over remarks O'Neal made concerning
Yao. O'Neal had 31 points and 13 rebounds to Yao's 10 points and 10
rebounds, but the Rockets won the Jan. 17 meeting 108-104 in
overtime.

Tomjanovich was diagnosed with the disease last week and missed
the team's five-game road trip. He was expected to return for
Wednesday night's game but said he thought his illness would be a
distraction to the team.

Houston dazzled the Lakers by hitting four of their first six
3-point attempts, but Fox led a 12-2 run with a pair of 3-point
baskets and the Lakers closed within 24-22 at the end of the first
quarter.

Game notes
The Rockets activated Tito Maddox prior to the game and
placed forward Bostjan Nachbar on the injured list with a strained
left groin. Maddox had been on the injured list since March 18 with
a viral infection. ... The Lakers played their ninth road game in
their last 10 and their third in a row. ... Eddie Griffin sprained
his left thumb in the first quarter and did not return.