LOS ANGELES (AP) -- Even with Shaquille O'Neal and Kobe Bryant
struggling to put points on the board, the Dallas Mavericks
couldn't find a way to defeat the Lakers in Los Angeles. 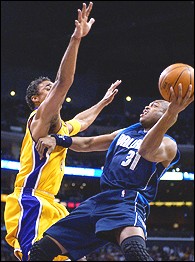 Another chapter in the Lakers' dominance over Dallas was written
Tuesday night, with Los Angeles breaking the game open in the
fourth quarter to defeat the Mavericks at home for the 25th
consecutive time, 108-99.

And while this loss wasn't as disheartening as the one the Mavs
had at Staples Center earlier this season when they blew a 27-point
lead in the fourth quarter, it hurt just the same.

Dallas was denied its 58th victory and fell into a tie with the
San Antonio Spurs for the league's best record, after having been
alone atop the NBA standings all season.

"The last one was probably the most frustrating loss we've ever
been through, probably the worst loss I've ever been a part of,"
Dirk Nowitzki said. "Today we hung in there the whole time and I
thought we played them well, but in the fourth quarter they stepped
up and made shots, and that's why we lost."

O'Neal and Bryant scored 14 points apiece, neither of them
reaching double figures until the fourth quarter.

"Our two big guys didn't have a great game and we still beat
them by (nine). It's going to take a lot more than whining and
crying and underachieving big men to beat us," O'Neal said, adding
of Dallas' centers: "They all stink."

"Happens like that once every two years," O'Neal said.

Los Angeles defeated the Mavericks for the 80th time in 99
all-time meetings between the teams. Los Angeles has won 44 of the
last 49.

"Hey, the Lakers have been a great team and a lot of teams
haven't done well in this building," Dallas coach Don Nelson said.
"What can I do about it? The record is what it is."

Raef LaFrentz and Nowitzki had 26 apiece for Dallas.

The game got away from the Mavericks quickly in the fourth, the
momentum turning decisively in the Lakers' favor when Bryant began
the quarter with a bank shot. A steal and dunk by Horry forced
Nelson to call timeout, and consecutive putbacks by George forced
him to call another with 8:22 remaining and the Lakers ahead 91-81.

LaFrentz made consecutive 3-pointers -- with O'Neal actually
going out and trying to block the second one _ to pull Dallas to
93-87. Horry then hit a short jumper and O'Neal reached 10 points
with 5:07 remaining by converting an alley-oop dunk that should
have been ruled offensive goaltending.

O'Neal's power dunk over Shawn Bradley with 4:16 left restored
the 10-point lead. George then hit a corner jumper and Bryant came
up with a steal that he turned into a behind-the-back pass to
George for a dunk that made it 103-89 and led Nelson to draw a
technical foul.

"I don't think Dallas would ever have expected to play that
kind of a game against us and lose by (nine)," Bryant said.

LaFrentz made it clear early on that he would force O'Neal to
come outside and guard him, scoring the Mavericks' first eight
points on jumpers. But LaFrentz picked up his second foul just 4:49
into the game, and he wouldn't become a factor again until the
third quarter.

The first 12 minutes ended with Bryant 0-for-0 from the field,
and O'Neal went to the bench with his third foul less than four
minutes into the second quarter.

Dallas couldn't take advantage during a three-minute stretch
when both Bryant and O'Neal were on the bench, although they opened
a 50-47 halftime lead after Bryant got a bit overzealous trying to
get himself untracked offensively.

There was more of the same from Bryant in the third quarter as
he missed six of seven shots, and the fourth quarter began with Los
Angeles holding a 76-75 lead despite neither O'Neal (eight points)
nor Bryant (seven points) having yet reached double figures.

Game notes
Bryant made a 75-foot shot from the opposite foul line just
after the third-quarter buzzer sounded. "Good aim," he explained.
... Michael Finley (strained hamstring) missed his 10th consecutive
game for Dallas. ... Mavs owner Mark Cuban missed the game. He was
in New York to attend the NBA's Board of Governors meeting. ... The
Lakers extended their home winning streak to 13 games.