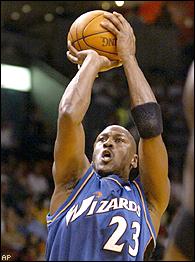 He had his No. 23 retired before the game Friday at Miami,
received a farewell speech from longtime nemesis Pat Riley and
watched a highlight video of his career on the big screen.

Then Jordan scored 25 points, tormenting Riley for the final
time, and led the Washington Wizards to a 91-87 victory over the
Heat. But minutes later, the 40-year-old superstar with six NBA
championship rings had his postseason hopes dashed.

He learned that Milwaukee and Orlando also won, eliminating the
Wizards from the playoffs with three games to play.

''It's disappointing,'' Jordan said. ''But we're going to be a
better team and organization from this happening.''

The night wasn't a complete waste for Jordan, who plans to
retire at the end of the season.

Then the Heat retired his jersey, hanging it from the arena's
rafters. As the Heat unveiled the half-Chicago Bulls, half-Wizards
jersey, Riley said no Heat player will wear the number again.

''In honor of your greatness and for all you've done for the
game of basketball -- and not just the NBA, but for all the fans
around the world -- we want to honor you tonight and hang your
jersey, No. 23, from the rafters,'' Riley said at midcourt. ''No
one will ever wear No. 23 for the Miami Heat. You're the best.''

Jordan then hugged Riley and waved to the crowd. Jordan averaged
30.2 points on 51.5 percent shooting in 37 regular-season games
against the Heat during his career. He was even better in the
playoffs, averaging 34.2 points in 11 games.

His jersey was the first Miami has retired in its 15-year
history.

''Having our guys walk onto the court and look up to see how
high you have to climb to reach what he has achieved is something
that I think is honorable,'' Riley said. ''I just believe he
deserves it. The guy has been the greatest player in the history of
the game, and I think it wouldn't be a bad idea for every team in
this league to hang his number in the rafters as a reminder of what
greatness is all about.''

Jordan said he was surprised by the gesture.

''It was by far the best gift I ever could have received,''
Jordan said. ''To have your jersey retired in someone else's
building, that says a lot. ... It's definitely something very, very
special.''

Jordan also thought all the pregame hoopla might have been a
psychological ploy by Riley. The Heat also introduced the Wizards
second, a switch from normal procedures at home.

''I thought Pat was trying to get my mind thinking about all the
accolades, and then next thing you know, I forget about the game,''
Jordan said. ''I said 'I ain't going to fall for that.' I got out
of the blocks quick and I got into a good rhythm.''

Jordan scored seven of the team's first eight points and
finished with 15 points in the first quarter on 7-for-12 shooting.

He needed just 17 points to retain the career scoring average
lead over Wilt Chamberlain. Jordan has averaged 30.2 to
Chamberlain's 30.1. He got it with a midrange jumper with about
seven minutes to play in the second.

He finished with 23 points in the first half, providing the
largest crowd ever in the Heat's arena its own highlight
memories. Jordan hit jumper after jumper, shooting over Anthony
Carter, posting up Mike James and going around Caron Butler.
Outside, inside, turnaround, baseline, pull-up.

With Jordan on, the Wizards hardly missed leading scorer Jerry
Stackhouse, who sat out because of tendinitis in his right knee.

''We got him started again,'' said Butler, who led the Heat with
19 points and eight assists. ''He has his little swagger going and
he was looking and winking at me.''

Jordan went 0-for-8 in the second half, finishing 11-for-26 from
the field, but did other things to help the Wizards win. He has
four assists, two rebounds and two steals. Larry Hughes and
Christian Laettner added 13 points apiece, and Kwame Brown and
Tyronn Lue had 12 each.

Even though the Wizards won, there was nothing they could do
about their postseason fate. Washington needed to win each of its
remaining games and have either the Magic or the Bucks lose all of
theirs. The Bucks beat Toronto, and the Magic won at Indiana.

''I think Michael made it exciting,'' Miami center Brian Grant
said. ''He was unstoppable in the first half. It seemed like every
shot he took went in. Nobody brings a presence like that individual
to an arena''