PHILADELPHIA (AP) -- Of all the prolific offensive performances
in the opening games of this year's NBA playoffs, Allen Iverson's
was the best. 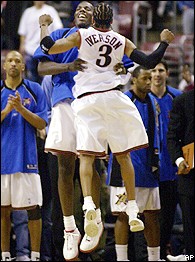 Not only that, it was one of the greatest in NBA playoff history.

Iverson scored 55 points Sunday night in a brilliant display of
shooting, making 21 of 32 shots while eclipsing his previous
playoff-high of 54 as the Philadelphia 76ers defeated the New Orleans Hornets 98-90.

"That was his best ever, by far,'' Philadelphia coach Larry
Brown said.

Iverson scored 20 in the fourth quarter to help his team hang
onto the lead throughout the final 12 minutes of a closely
contested, physical game.

Iverson joined Michael Jordan, Rick Barry, Charles Barkley, Wilt
Chamberlain and Elgin Baylor as the only players to score 55 or
more in a playoff game. Jordan holds the NBA record of 63.

"When I'm out there on the basketball court in front of 20,000
people, and I'm making shots and they're into it and jumping up and
cheering, that's what I get the goose bumps from,'' Iverson said.
"Because I know when these people leave this arena, that might be
something they'll cherish for the rest of their life.''

The fans weren't the only ones cherishing it.

Iverson's coach and teammates were in awe, as were the Hornets.

"The only player I've ever seen play like that was Michael
Jordan,'' Derrick Coleman said.

"It's right up there with Mike's 63,'' Hornets coach Paul Silas
said.

"It was the single-best performance I've ever been a part of,''
Philadelphia's Keith Van Horn said.

During the first seven games of the postseason Saturday and
earlier Sunday, there was a 46-point performance by Dirk Nowitzki
of Dallas and a 43-point outing by Orlando's Tracy McGrady.

Iverson outdid them by a bunch, hitting nearly everything he
tossed up with the exception of a stretch of five consecutive
misses during the third quarter.

"He must've been watching TV all day, watching all those young
gunners putting up those numbers -- and he had the last game in
prime time,'' the Sixers' Aaron McKie said.

With Philadelphia clinging to a two-point lead, Iverson came off
a pick from Van Horn and hit a 3 to make it 89-84. On
Philadelphia's next possession, he dribble-faked Stacey Augmon
off-balance, stepped back and hit another 3 to reach 51 points and
give the Sixers a 92-84 lead with three minutes left.

After the Hornets pulled to 94-90, Iverson used his lightning
speed to drive around George Lynch for a layup that gave him his
final points with 37.3 seconds left.

Iverson reached 50 points for the third time in 46 career
playoff games. It was his ninth game with at least 40.

"I caught a rhythm. The basket looked like an ocean, and I was
just throwing rocks in,'' Iverson said.

Iverson reached 30 points just 3½ minutes into the third
quarter, but he missed his next five shots while being defended by
Augmon before hitting a 3-pointer that gave the 76ers a 70-68 lead
entering the fourth period.

Iverson then made his first four shots of the final quarter.

Jamal Mashburn led the Hornets with 28.

Iverson had six assists in the first quarter, the last of which
was the niftiest. Iverson tossed an around-the-back pass to Tyrone Hill at the foul line, and Hill gave it back and made a backdoor
cut. Iverson found him instantly, threading a pass to Hill right
under the basket for a dunk that gave the 76ers a 25-18 lead.

Iverson took a brief rest early in the second quarter, and New
Orleans had a 13-0 run to go ahead 33-29. The remainder of the
quarter turned into a foul-shooting exhibition as the Hornets were
whistled for 13 fouls and Philadelphia scored 14 points at the line
to overcome 4-for-18 shooting.

Snow drew charges on David Wesley and Baron Davis on consecutive
possessions, forcing both to the bench with their third fouls with
more than three minutes left before the half. Philadelphia led
49-44 at intermission behind Iverson's 25 points.

Game notes
Iverson's overall career high is 58 on Jan. 15, 2002
against Houston. ... Iverson scored or assisted on Philadelphia's
first 14 field goals. ... Van Horn shot for 1-for-8 in his first
playoff game with the Sixers, missing his final six shots -- the
crowd groaning increasingly louder on the last three. ... Wesley
finished with five fouls and five points. ... Coleman had five
fouls and four points.