SAN ANTONIO (AP) -- Open from behind the 3-point line in the
closing seconds, Robert Horry let sail what looked like another incredible game-winning shot. 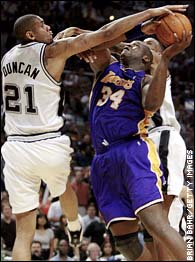 Only this time, it went in -- and out. And now the Los Angeles
Lakers are one loss from the end of their run of three straight
championships.

David Robinson grabbed the final rebound with 3 seconds left and
the San Antonio Spurs pulled out a 96-94 victory Tuesday night in
Game 5 of their second-round series.

The Spurs never trailed en route to taking a 3-2 series lead.
But had Horry's shot gone in, San Antonio would've blown a 25-point
lead one game after letting a 16-point lead slip away.

Los Angeles coach Phil Jackson returned three days after
undergoing a heart procedure, only to see his team play
lethargically for three quarters. Now the Lakers must win the next
two games, or their postseason will end the same way it did the
last time they failed to win it all -- going down to San Antonio in
the conference semifinals. That was in 1999, when the Spurs won the
title.

Game 6 is Thursday night in Los Angeles, with a possible Game 7
in San Antonio on Saturday. The Lakers are 0-5 this season at the
Spurs' new home, the SBC Center.

The Lakers have three losses in a series for only the third time
during their championship run. They trailed Sacramento 3-2 last
season and were tied at 3 against Portland in the 2000 conference
finals.

Against the Kings, Horry won Game 4 with a 3-pointer. Many of
the 18,797 in the arena had flashbacks to that shot when he put up
this one from the left side with no defender in his way.

"When he shot it, I was thinking about the Sacramento shot,''
Robinson said. "I was thinking, `Please don't go in.'''

Bryant was ready to celebrate when Horry's shot went up. It
wound up being his sixth 3-point miss of the game and dropped him
to 0-for-15 behind the arc this series.

"It looked like perfect arc, good rotation. It looked like it
was going in. It rattled around and came out,'' Bryant said. "He's
made so many before tonight. If he has another opportunity in the
next game, I'll give it to him again.''

Although Shaquille O'Neal had the three-point play that got Los
Angeles within one with 19.7 seconds left, he finished with only 20
points and 12 rebounds.

His play was sluggish, and he wasn't on court for the first half
of the fourth quarter. Jackson said the comeback might not have
started if he had been.

"We needed active defense and we needed aggressive play out
there. Shaquille was not active tonight -- he didn't move well
defensively, he didn't get back on defense,'' Jackson said. "It
hurt us a little bit.''

Tim Duncan led San Antonio with 27 points and 14 rebounds, and
Tony Parker had 21 points, but they were as cold as all their teammates when it mattered most.

That it even came down to the last shot was stunning,
considering the only time the game was tied was 2-2. The Spurs
controlled the first three quarters and still led 87-71 with 7:21
to play.

Then the Lakers went on a 15-3 run to get within four, prompting
Duncan to slam the ball down while calling a timeout. A beautiful
alley oop from Duncan to Robinson, who had six points after going
scoreless in Game 4, restored a seven-point lead.

A 3-pointer by Bryant and the three-point play by O'Neal set up
Horry's near-heroics.

Los Angeles also was helped by Stephen Jackson missing a free throw with 15.1 seconds left. The Spurs were just 4-of-9 from the line in the fourth quarter.

The Lakers are going uphill in their bid to become the first
four-time champion since the Boston Celtics won their eighth straight title in 1966. Jackson also has a big streak on the line, having won his last 26 playoff series, including six championships.

"We're going to go back and win one, and we're going to come
back here and find a way to win No. 7,'' said Jackson, who on
Saturday had an angioplasty to open a heart artery that was more
than 90 percent blocked.

Game notes
Los Angeles' Stanislav Medvedenko had 13 points in 17
minutes, including seven in the fourth quarter. ... After seeing
O'Neal and Bryant dominate the early scoring in Game 4, the Lakers'
first 12 points came from all five starters. ... Phil Jackson got
as much sympathy as expected from an opposing crowd. One fan held a
sign that read, "Phil, whining about the refs is bad for your
heart.''