DALLAS (AP) -- Steve Kerr was a forgotten man for most of the
postseason. 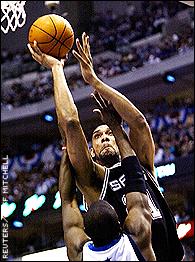 "I'm 37. I'm slow. I'm not a very good defender,'' Kerr said,
explaining why San Antonio coach Gregg Popovich had kept him at the
end of the bench.

Kerr went into Game 6 of the Western Conference finals having
played just 13 minutes with a grand total of zero field goals.

But in the third quarter Thursday night, Popovich had nothing to
lose. His team was playing poorly, his starting point guard was ill
and the backup wasn't effective. So he turned to the guy with four
NBA championship rings and told him to fire away.

Rekindling images of his glory days alongside Michael Jordan in Chicago, Kerr hit four 3-pointers, three during an amazing
fourth-quarter rally that took the Spurs from 13 down all the way
to the NBA Finals.

San Antonio beat the Dallas Mavericks 90-78 to win the series
4-2. The Spurs advanced to play the New Jersey Nets in the championship round, starting at home Wednesday night.

"I mentioned to Steve that he needed to be ready tonight, and
he was real ready,'' Popovich said. "It's a fitting finish to what
I thought would be the end of his career, but he told me we're
going to have to think about an extension or he won't be available
for the finals. And he said that with a straight face.''

Dallas led by as many as 15 and was ahead 71-58 when Nick Van
Exel made a jumper with 10:53 left. Even with Dirk Nowitzki missing
a third straight game because of a sprained left knee, the
Mavericks appeared headed to a winner-take-all seventh game on
Saturday night in San Antonio.

"I didn't think the game was over,'' Mavs guard Raja Bell said,
"but you can't help thinking about Game 7.''

The Spurs came back with stingy defense and the outside shooting
they lacked in previous games. Their six straight 3-pointers to
open the fourth quarter were the ultimate zone-busters.

Manu Ginobili had the first, then Stephen Jackson hit two.
Kerr's trio came in a span of four possessions, with the first
tying it at 71 and the last making it 79-71. Ginobili added two
free throws before Van Exel ended Dallas' drought with 2:51 left.

Over 8:02, the Mavericks missed seven shots and committed six
turnovers. It was a stunning meltdown for a team that has thrived
on making other teams melt down, such as in Game 5, when they made
San Antonio blow a 19-point lead.

"We were playing so well for so long and the bottom just
dropped out,'' coach Don Nelson said. "We couldn't get a shot to
go in. We went cold at the wrong time.''

Nelson, only under contract as general manager next season,
might've been on the sideline for the final time.

Kerr, the career leader in 3-point accuracy, took only four
shots, but made them all, and all were behind the line. That made
for 12 points in 13 minutes. He also had three assists and two
rebounds.

"I figured just let it fly and see what happens,'' said Kerr,
who won three NBA titles with Chicago and one with the Spurs in
1999. "This is one of best nights of my career, ranks right up
there with anything that happened in Chicago.''

Jackson scored 24 points, making five of San Antonio's 10
3-pointers, on a night when Tim Duncan was constantly double- and
triple-teamed.

Van Exel had 19 points to lead the Mavericks, who were without
Nowitzki for the third straight game because of a knee injury that
probably would've prevented him from playing in a Game 7.

Michael Finley, who had only 13 points after 31 the previous
game, bit his collar as he left the court with 1:01 to play, then
hugged Nelson.

When the game ended, a franchise-record crowd of 20,812 stood
and applauded. Steve Nash, the last player to leave the court,
slowly made a 360-degree turn while returning the applause.

Game notes
Finley felt he let the team down. "It was the biggest game
of the year and I didn't play up to par,'' he said. "I made a plea
for the crowd to make noise for 48 minutes. They held up their end
of the bargain, but I didn't.'' ... That plea was played on the
main scoreboard before tipoff and at the start of the second half.
... Over the middle two quarters, the Spurs had as many field goals
(13) as turnovers. ... San Antonio had 17 turnovers. In the others
three wins this series, the Spurs had 16, 14 and 14. They had 11
and nine in their losses.