SAN ANTONIO -- All week long, the New Jersey Nets banged their collective heads against the wall trying to figure out how to beat the San Antonio Spurs' smothering zone defense. 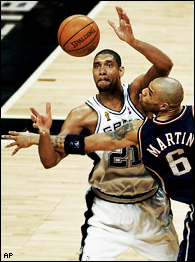 It took one performance for the ages to bring the Nets back to the real reason they're runners-up in the NBA Finals for the second straight year.

Duncan recorded his usual double-double in points (21) and rebounds (20). But it was the league MVP's assists (10) and blocked shots (eight) that made the biggest impact in the Spurs' come-from-behind 88-77 victory at the SBC Center.

During a 19-0 run in the fourth quarter, Duncan, the unanimous Finals MVP, blocked three shots to help keep the Nets scoreless for eight straight possessions and fed Stephen Jackson on two of his three championship-clinching 3-pointers to give the retiring David Robinson the perfect going-away present.

The win enabled the Spurs to close out the Nets in six games and raise the franchise's second Larry O'Brien Trophy in five seasons to go with its championship in the strike-shortened 1999 season.

"I'm sure he had absolutely no clue what his stats were, what was going on statistically," Spurs head coach Gregg Popovich said of Duncan. "He just knows what's going on in the game and what needs to be done."

"Down the stretch, my shot wasn't exactly there and luckily enough I was drawing double teams and those guys were hitting shots," said Duncan, who set a Finals record with 32 blocks in the series. "So I'm going to give them the ball every time they're open."

Playing catchup for the first three quarters and managing to only tie the game once at 38-38 in the second period, San Antonio finally ruined New Jersey's spirited attempt to force a Game 7 with a stunning turnaround three minutes into the fourth quarter.

Rodney Rogers' 3-pointer pushed the Nets out to a 72-63 lead, but New Jersey wouldn't score again for the next five minutes and 34 seconds.

Malik Rose's pair of free throws with 8:39 remaining innocently began the Nets' demise. Duncan blocked two layups to prolong a 10-0 run that resulted in the Spurs' first lead of the night on the second of consecutive 3-pointers by Jackson.

Jason Kidd's jumper ended the Nets' drought. However, New Jersey would get no closer than six points after that due to the frigid shooting of Kenyon Martin, who missed all six of his fourth-quarter shots to finish a dreadful 3-for-23 from the field for just six points.

"If you sit down and watch him play all season, being on this team and seeing what he does and how easy it makes our job, you definitely have to respect him," said Jackson, who recovered from early-game jitters and benching to score 17 points.

Popovich yanked Jackson three minutes into the game after seeing his starting small forward bounce a pass off a Nets defender's leg, force a baseline jumper and throw a skip pass over Parker's head and over the press table. Manu Ginobili replaced Jackson, then proceeded to air-ball his first shot, a 3-pointer that fell way short.

The Spurs committed six turnovers in the quarter as Richard Jefferson scored 10 of his 13 points to lead the Nets to a 25-17 lead. To calm down his team, Popovich called on Game 5 hero Steve Kerr to team up with Claxton in the backcourt. That ploy didn't work either, as Anthony Johnson scored twice over Claxton on strong drives to the basket to push New Jersey out to a 31-21 lead.

The Spurs didn't collect themselves until late in the first half when they scored eight straight points to tie the Nets at 38-all. Robinson, who tapped the fountain of youth in a breakout performance in a Game 1 win, looked like his old self in scoring four of his 13 points during the run, two coming on a driving reverse layup. Duncan provided the other buckets, banking in a runner across the lane to pull San Antonio even. Kidd, however, quieted the crowd with a 3-pointer from the top of the key to keep New Jersey ahead at halftime at 41-38.

The Nets handled the Spurs' occasional zone look relatively well in shooting 39.5 percent from the field in the first half. The Spurs bounced back from a 6-for-16 first quarter to shoot 43.2 percent (16 for 37) but didn't build on the momentum gained from its late run.

Instead, the Nets went on a 14-5 spurt to take a 55-43 lead. New Jersey got its transition game going with Kidd capping the run with the play of the game, a no-look pass from midcourt to Jefferson for a layup and 3-point play.

Kittles' left-handed layup kept the Nets' lead at 12 at 57-45. The Spurs then whittled their deficit to four at 59-55 on six straight points from Ginobili's fake-behind-the-back-pass layup, Duncan's jump shot and Claxton's jumper behind a Duncan screen, but the Nets weathered another challenge to take a 63-57 advantage into the final quarter.

"I thought for three quarters we played pretty well," Nets head coach Byron Scott said. "We had, in the first half, a lot of defensive breakdowns that we talked about at halftime, especially in the fourth quarter, those things seemed to reappear again.

"But, you know, you have to give San Antonio a lot of credit. It's a great basketball team, a great coaching staff. Pop is doing a fantastic job with those guys. They have one of the best players in this league in Tim Duncan. I think he proved that tonight."

After the comeback, all that was left for the Spurs were the curtain calls. First, Robinson left the game to a thunderous ovation. Following him to the bench was Duncan, who couldn't help but feel a little nostalgic seeing his mentor leave his final game.

"For a second there on the court, the last couple of seconds, I really thought, 'You know what, I'm not going to play with this guy again. I'm going to have to come out on this court without him. It's going to be weird,' " Duncan said. "I don't know what to expect.

"But likely enough, our guys have done a great job putting things together, R.C. (Buford, the Spurs' general manager) and Pop, those guys have done an incredible job of getting players and putting them on the floor and giving us a chance to win. We'll fill a void and we'll find a way to hopefully get back there."