HOUSTON (AP) -- The Houston Rockets opened their new arena with a
series of firsts and the biggest of all was a victory at Toyota
Center. 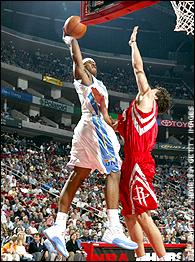 A sellout crowd of 18,189 was on hand as the coach Jeff Van
Gundy era started with a runaway victory.

Yao Ming got the basket with 11:03 to go in the first quarter
and the first free throw with 9:58 left. Steve Francis hit the
first 3-pointer with 5:11 to go, and Denver's Chris Andersen got
with first dunk in the second quarter.

"It was great," Francis said. "It will be something you never
forget. Twenty to 25 years from now, you can say you were a member
of the team that won the first game here.

"The crowd was great. When they started coming back, the crowd
picked up loudly. I thought it really helped us.

Francis capped the run with a long pass to Mobley for a
fast-break dunk for the Rockets, who were up 72-60 at the end of
the third quarter.

"There was no particular emotion, other than wanting to play
well," Van Gundy said. "Coaches work in strange ways. I'm
thinking about Memphis (next opponent) right now. We didn't play as
well as I thought we might. We had a lot of blown assignments and
mistakes."

The Nuggets beat defending champion San Antonio in their season
opener Thursday night, shooting only 29 percent from the field. But
they couldn't keep pace with the Rockets, who had all five starters
plus sixth man Maurice Taylor in double figures.

"You are not going to win games with 23 turnovers and they were
really bad turnovers," Nuggets coach Jeff Bdzelik said. "We
haven't been rebounding the ball well and our wings are not running
hard enough."

Andre Miller led the Nuggets with 19 points, and rookie Carmelo
Anthony added 18, shooting 4-of-15 from the field.

"It was a very tough 18 points," Anthony said. "I tried to do
too much and in the second half, I calmed down. We missed a ton of
shots, and Houston ran on us and picked up their lead. We're not
pushing the ball the way we did in preseason."

The opener took place without Rockets forward Eddie Griffin,
indefinitely suspended after missing several workouts and a team
flight. Taylor played in his first game after missing the entire
preseason with a dislocated shoulder.

Cato said the Rockets had to settle down from the exciting
opening night.

"Opening night was a really big deal for us," he said. "Once
everyone got settled down, we were all right. I really did get
frustrated the first half, but coach Van Gundy pulled me aside
during the half and told me not to worry about missing shots.

"In the second half I was all right."

One of the crowd's biggest cheers came with 1:25 left, when
Mobley made the second of two free throws, giving the Rockets 100
points. A hamburger chain offered free hamburgers to each fan if
the Rockets hit the 100-point mark.

"The only thing I'd like to change is give them a hamburger if
we hold them under 80," Van Gundy said.

Game notes
Van Gundy needs one victory to reach 250 for his career.
... Nuggets assistant Scott Brooks played for the Rockets from
1992-1995. ... Anthony made his NBA debut with 12 points, seven
rebounds against the Spurs. ... Anthony averaged a team-high 17.4
points in eight preseason games.