SEATTLE (AP) -- Jason Williams put the past behind him, just like
the Memphis Grizzlies are doing this season. 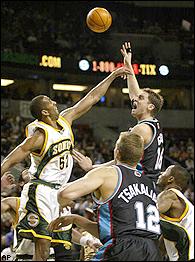 Williams scored 28 points on 11-of-18 shooting, and his
3-pointer with 10.7 seconds to play helped the Grizzlies to a 98-97
win over the Seattle SuperSonics on Friday night.

Coming off a five-point, four-turnover performance Wednesday
night against Detroit, Williams was spectacular in the second half
at Seattle, scoring 24 points. He finished 6-of-10 from 3-point
range.

"I want to play better in every game," Williams said. "If I
score 30 one night, I want to try to score 30 again the next night.
I'm always doing the best I can. I don't really take it personal or
anything like that.

"Then I might come out and force some things, and that's not
good for my team."

It was the first time the Grizzlies have won in Seattle in 16
tries. It also lifted Memphis to 6-5. While it's only November,
it's the latest in the season the Vancouver-Memphis franchise has
been above .500.

"We're happy with our progress," said Shane Battier, who
scored 11. "We don't put much stock in the past. There's nothing
we can do to change it, so we're just focused on playing a better
brand of basketball."

Lorenzen Wright scored 16 and Mike Miller had 13 for the
Grizzlies, who have won four of their last five -- also beating the
Mavericks, Spurs and Lakers.

"We knew they were going to be good," said Seattle's Luke
Ridnour. "We just let the game get away from us."

Ronald Murray led Seattle with 26 points, while Vladimir
Radmanovic scored 23. Ridnour had 10 for the Sonics, who led 66-56
midway through the third and had things under control.

"We needed defensive stops," Seattle coach Nate McMillan said.
"We made some fouls late in the game and bailed them out. We gave
them 23 second-chance points. We need to execute when the game is
on the line."

Williams had 11 points in the third, keeping the Grizzlies
close. He came through again with 6:10 to play, getting a steal
under Seattle's basket and then making another 3-pointer to give
Memphis an 84-83 lead.

"He can turn the game around single-handed, as we saw
tonight," Battier said.

Murray answered with a 22-footer, and things looked good for
Seattle when the Grizzlies couldn't get a clean shot as the clock
wound down at the other end and Wright's tip was off the mark.

But after a timeout, Murray's drive on the left side of the lane
was blocked by Dahntay Jones, a rookie making his NBA debut after
coming off the injured list earlier in the day.

Williams worked the clock, glancing at coach Hubie Brown for
instructions, before draining his final 3-pointer with 10.7 seconds
remaining.

"This is really the first team that played the pick-and-roll,"
Williams said. "They didn't really trap me to try to get the ball
out of my hands. They were really going under sometimes. They
didn't know what they were doing. I had open shots."

It wasn't over until a confusing ending.

Williams put Memphis ahead 97-94, and Wright added a free throw
that mattered when Radmanovic swished a 3-pointer with 0.9 seconds
on the clock.

The Grizzlies couldn't get an inbounds play started. Battier
bounced the ball onto the court but nobody touched it until Murray
ran it down and threw up a shot just after the horn sounded.

Game Notes: Jones, the 20th overall pick in the June draft, didn't play
until eight minutes remained. He went scoreless on 0-for-3
shooting. ... Brown, upset with the foul calls in the first
quarter, was assessed a technical after the period when he
confronted official Marc Davis at halfcourt. ... McMillan got
another early in the second half.