TORONTO (ESPN.com news services) -- Shaquille O'Neal ripped the officiating in a profane post-game tirade Sunday after scoring 36 points in the Lakers' 84-83 victory over the Raptors. 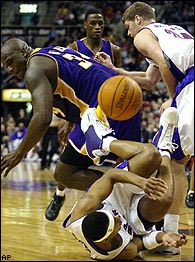 Shaq told KCAL-TV that the fans came to watch the players, not the officials, then used the f-bomb while complaining that officials were "taking over the game.''

"My message to [commissioner] David Stern is get some people in there that
understand the game and don't try to take over the game because
people pay good money to see good athletes play,'' O'Neal said. "Let us play, don't be trying to take
over the game."

O'Neal twice used
profanities on live television in the postgame interview with KCAL-TV. When
informed he was on live, O'Neal replied with a vulgarity.

He later sympathized with Vince Carter, who had a chance to win
the game in the final seconds but did not get a foul call. Rick Fox
and Gary Payton converged on Carter as he drove to the basket.
Carter threw up the ball, thinking he had been fouled but official
Luis Grillo did not call one.

Payton then ran out the clock.

"I thought the last five times I shot the ball was a foul
too," O'Neal said. "He got fouled, I got fouled, and they didn't
call it."

O'Neal said official Scott Foster has it in for him.

Carter called the non-call "unreal" but would not say more.

Toronto coach Kevin O'Neill didn't want to talk about it either,
but said it was a tough game to officiate.

"You have two guys, Vince and Shaq, that both think they should
be fouled every time or called every time," O'Neill said.

Payton added 14 points for the Lakers, who are in the midst of
playing seven road games in 11 days -- their longest road trip since
1991-92.

Los Angeles, which won't return home until after the All-Star
break, is without injured stars Kobe Bryant and Karl Malone. Bryant
was placed on the injured list Friday because of a severe cut on
his right index finger that will keep him out of action for at
least a week.

Malone is most likely out until mid-March with a sprained knee.

Carter had 27 points and 10 rebounds, Donyell Marshall had 18
points and 13 rebounds and Chris Bosh added 17 points and 14
rebounds for the Raptors, who are three games below .500 for the
first time this season.

Carter had 15 points in the second half to help Toronto cut a
16-point lead to three.

Jalen Rose cut it to two with a free throw after Los Angeles
coach Phil Jackson received a technical foul for arguing that Bosh
committed goaltending instead of blocking a shot.

But Payton followed with two free throws, giving the Lakers an
84-80 lead with 1:37 left.

After Carter's 3-pointer over O'Neal cut the lead to one with 48
seconds left, O'Neal passed out of a double team to Kareem Rush,
who missed an open 3-pointer, giving Toronto the ball with 29
seconds left.

Fox and Payton then converged on Carter in the waning seconds.

"He tried to make it look like a foul, but it was all ball,"
Payton said.

Carter and O'Neal received technical fouls earlier in the game
for arguing with the officials.

Game notes
O'Neill said he would rather play the Lakers with Bryant in
the lineup. "That's no knock on Kobe whatsoever. I just think they
are probably more focused on getting the ball inside with him out,
and if they are, that's a problem for us," O'Neill said of his
undersized club. ... The Raptors have beaten the Lakers only once
at home.