SAN ANTONIO (AP) -- San Antonio looked tired and the win was more
than just a little ugly. But the Spurs are moving on in the Western
Conference playoffs and the Denver Nuggets are done. 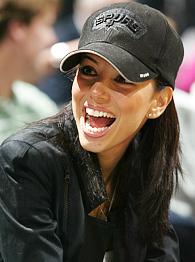 Tony Parker scored 21 points, Tim Duncan had 18 points and 11
rebounds and the Spurs eliminated the Nuggets with a 99-89 victory
Wednesday night. After dropping the first game in the series, the
Spurs won four in a row.

San Antonio, which has lost only four times at home this season,
moves on to a second-round matchup with Seattle.

Spurs fans who left early in Game 1 as their team floundered
down the stretch stayed for all of this one as the San Antonio
didn't seize control until late in the fourth quarter.

After twice falling behind in the third, the Spurs slowly pulled
away in the final period. Glenn Robinson, who was cut by New
Orleans in March and signed as a free agent just last month, hit a
jumper and then followed with a long 3-pointer that made it 80-72
with 7:35 to play. The lead reached as high as 12. 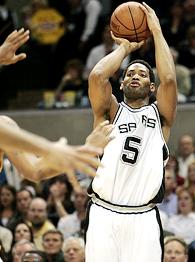 Manu Ginobili added 18 points and Robert Horry scored 17,
including a pair of key 3-pointers in the third for the Spurs.

Denver couldn't find the same game that won Game 1 and rallied
them to overtime in a Game 4 loss on their homecourt.

Carmelo Anthony, who complained after Monday night's loss he
didn't get enough touches, finished with 25 points for Denver.
Andre Miller added 16 points for the Nuggets.

With the home crowd behind them again after two road wins, the
Spurs seemed ready to take control several times in the first half.

But each time, the Nuggets got the turnover or basket they
needed to keep it within reach.

Parker scored 10 points in the first quarter, but also picked up
two fouls that forced him to the bench for much of the second.

Ginobili, who was greeted by a chorus of boos every time he
touched the ball in Denver, was met with a loud cheer when he
checked in. He hit his first two 3-pointers in the first but didn't
hit another basket until a 3-pointer bounced off the rim and
backboard before falling in to make it 43-38 with 1:10 left in the
half.

The five-point difference was the biggest lead of the half and
the Nuggets closed it to within 45-43 at the break with a
three-point play by Anthony and his layup with 1.8 seconds left.

Although Parker kept pushing the ball and driving to the basket,
the rest of the Spurs looked tired in the third, perhaps still
fatigued from their overtime win Monday night.

Shots hit the front of the rim, passes misfired and the Nuggets
twice took one-point leads, the last at 65-64, before the Spurs
ended the quarter with a 7-2 run. Horry's second 3-pointer put San
Antonio up 71-67 going into the fourth.

That's when the Nuggets started to struggle. Twice called for
shot clock violations against the stiff Spurs defense, the Nuggets
couldn't get the shots to fall when they got them off. Denver shot
just 8 of 22 in the final period.

Game notes
Horry has played in 180 career postseason games, moving
him past Michael Jordan and tying him for ninth in league history
with Dennis Johnson. His five NBA titles won with the Rockets and
Lakers are the most among active players ... X-Rays on Marcus
Camby's bandaged pinky and ring finger on his right hand before the
game were negative. Camby took off the bandage by the second
quarter but grimaced heading back up court after a dunk.