CLEVELAND (AP) -- Ty Detmer wanted to show the Cleveland Browns
they had made a big mistake. 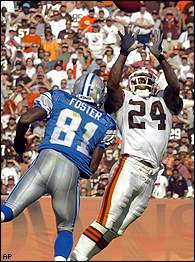 Instead, he made seven of his own.

Detmer, traded by Cleveland earlier this month, threw seven
interceptions -- one less than the NFL record -- as the Browns rolled
to a 24-14 win over Detmer and the sloppy Detroit Lions on Sunday.

"It's embarrassing," Detmer said. "I definitely tried to
force things that weren't there. I know better than to do that.
That was not me out there. I put my team in a hole seven times."

What do the Lions try now on offense?
That's anybody's guess. When you throw seven interceptions, that's ridiculous. I don't know what coach Marty Mornhinweg is going to do. He's in a tough predicament; he can't really bring Charlie Batch back because he said Ty Detmer is his quarterback. So he'll probably hang in there with Detmer and chalk it up to his only being with the team for three weeks. But the throws Detmer made were bad -- they were lobs and weren't even close. They were really poor throws. This could set up an interesting situation in the Lions' locker room. Are the players going to say, we want Charlie back? It will be interesting to see how Mornhinweg and Matt Millen handle this; it's going to be delicate.

ESPN.com NFL analyst Vinny Cerrato has served as director of player personnel for the Redskins and 49ers.

Rookie Anthony Henry had three interceptions as the Browns got a
little revenge on Detmer, who was Cleveland's team prankster during
his 2-plus years with the Browns.

More than once Detmer dumped a bucket of ice water on an
unsuspecting Browns teammate or lined their shoes with Vaseline.

"Ty's a good quarterback, but you know how he likes to play
practical jokes?" cornerback Corey Fuller said. "That was a
joke."

Fuller, though, was one of several Browns who comforted Detmer
after his final interception and told his former teammate to "keep his
head up."

Celebrating their first win was difficult for some of the
Browns, who felt sorry for Detmer. He had been the consummate team
player in Cleveland despite losing his starting job to Couch in '99
and sitting out all last season with an injury.

"It hurts that it's Ty," said safety Percy Ellsworth, who had
one of the seven picks. "I'd be partying all night long if it
wasn't Detmer. I'm happy for us and our fans, but I didn't know I
had as much respect for Ty until this very moment."

Detmer played dreadfully in his first start since replacing
Charlie Batch as Detroit's starting quarterback, completing 22 of
42 passes for 212 yards and the seven interceptions.

"I was just trying to do way too much," he said.

Detmer came within one interception of tying the NFL record of
eight in a game, set by Jim Hardy of the Chicago Cardinals in 1950
against Philadelphia.

"It wasn't just Ty," said Lions first-year coach Marty
Mornhinweg, whose team has a bye next Sunday. "We'll get this
right. We're going to look at personnel, scheme, plays, the whole
ball of wax. It's been a nightmare start."

Couch completed 12 of 20 passes for 138 yards and matched a
career high with the three TDs -- including one to backup center
Shaun O'Hara.

Couch's 34-yard scoring toss to rookie Quincy Morgan gave the
Browns a 24-7 lead and ended any chance for Detroit.

After the game, Couch talked to Detmer, his mentor and close
friend.

"I knew he was hurting," Couch said. "I felt bad. I'm
thrilled to get our first win, but there's a part of me that feels
bad for Ty."

On a day when America's red, white and blue blended equally with
shades of Cleveland's brown, orange and white team colors in the
crowd of 73,168, the Browns' defensive backs provided a poignant
moment during the emotional pregame ceremonies.

"We just wanted to let everyone in America and New York know
that we're behind them 110 percent," Little said. "It was very
emotional. I know I wasn't the only one to shed a tear."

Kevin Johnson, mentioned in trade rumors to Kansas City this
week, caught one of Couch's TD passes in the first half. The other
went to O'Hara, a 6-foot-3, 287-pounder who ran uncovered through
the end zone to catch Couch's throw.

"We practiced it one time," O'Hara said. "I'm Irish and
lucky. I could ready every word on the ball as it was coming to me.
It took about 20 minutes."